I am working on balancing an air-spindle. For the unbalance analysis I use an accelerometer (NI device). I have the voltage signal from the accelerometer corresponding to the vibration of spindle at a particular frequency (rpm) saved in an excel file. To analyze the unbalance from this vibration signal I use the fft function in MATLAB. My data is sampled at a sampling frequency of $100,000\textrm{ Hz}$. I am using the same example code given in the fft documentation. The result of fft is as shown. 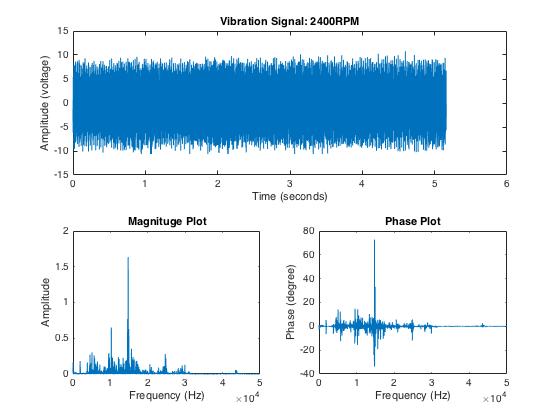 The present signal consists of signals of various frequency. How can I filter this result in order to get only the signal of frequency equal to my rotational frequency ($40\textrm{ Hz}$). I would need this signal to calculate the vibration phase and magnitude by comparing it with the tachometer signal. My MATLAB code looks like this:

Any help is much appreciated.

NOTE: (Updated noting the sampling rate and desired frequency) Your post describes extracting a 40 Hz signal at a 100,000 Hz sampling rate. Your filtering implementation will be significantly easier (and more effective) if you apply course low pass filtering and decimation to a lower rate before applying the 2nd order tuned resonator derived from an exponential averager as shown in detail below. Please review this post Fast Integer 8 Hz 2nd Order LP for Microcontroller. I suggest decimating to a 200 Hz sampling rate which is a decimate by 500 (in stages such as 5-10-10).

Once decimated, consider using an exponential averager implementation, following this post for converting the lowpass filter to a bandpass, tunable to any frequency including your desired 40Hz: 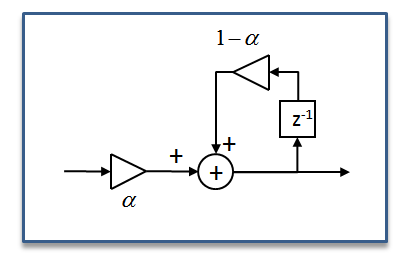 UPDATE: In pursuing the transformation myself I came up with the following result:

K is a normalizing constant that is dependent on $\omega_n$ and $\alpha$ given as:

The resulting implementation as a tuned 2nd order resonator is shown below. 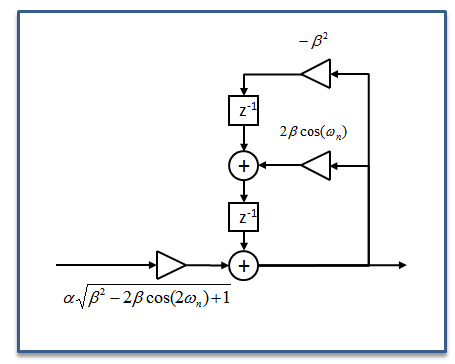 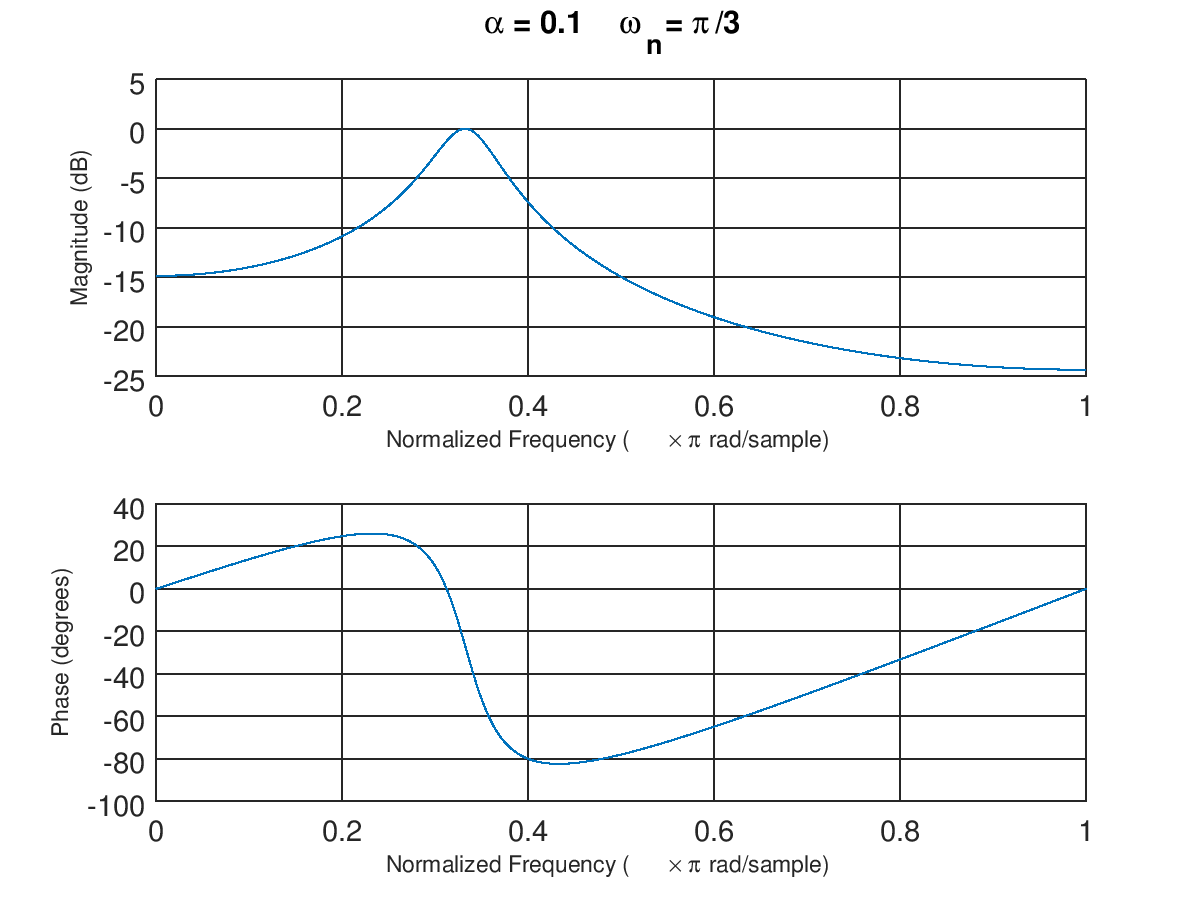 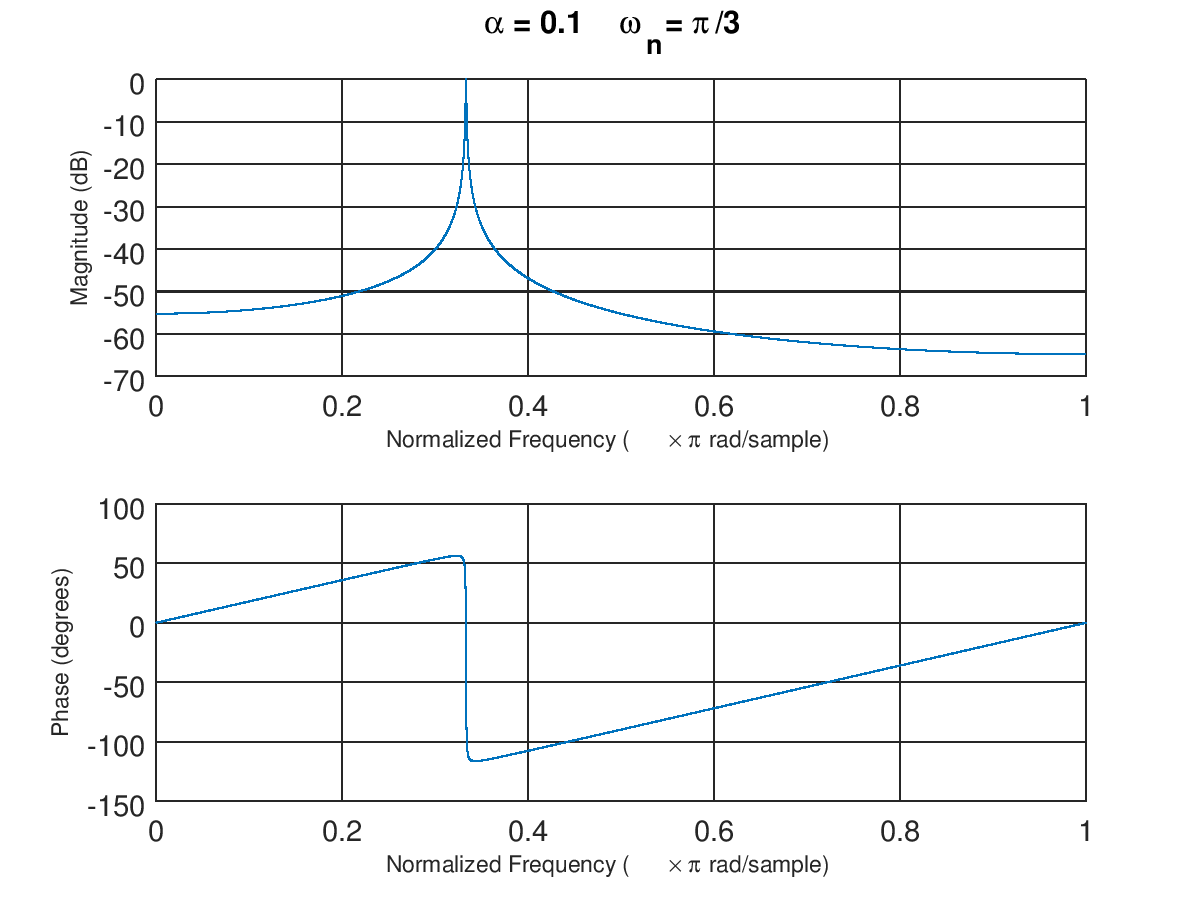 Note that the very long delay this second filter would have as evidenced by the very steep phase slope through the passband (group delay = $d\phi/d\omega$), as required for any tight bandwidth filter. This would also mean a relatively long convergence time. Given the ability to tune bandwidth and center frequency independently, you can envision how this can enable an optimized implementation for certain applications that is initially wide band for fast convergence while the bandwidth tightens over time to maximize SNR for the signal of interest. This structure can also be used as a bandpass loop filter or in a bandpass Sigma Delta implementation for bandpass sampling.

Below is an equivalent form of the exponential averager that only requires one multiplier as Rick Lyons has shown at the site linked below. Here I have chosen $\alpha$ to be similar to what Rick had done, in that $\alpha$ is a small number approaching 0 to make the bandwidth tighter (this is in contrast to my other post linked above for the notch filter implementation where I used $\alpha$ approaching 1 to be a tighter bandwidth, so swapping $\alpha$ with $1-\alpha$ between these two posts. I think the formula is cleaner if you actually use $\alpha$ as the number approaching 1, in that it eliminates my need to use $\beta$ as I have done above without the formulas appearing too cumbersome.

As Dan Boschen was pointing, I propose a simpler solution given the description of your problem: "The present signal consists of signals of various frequency [...] How can I filter this result in order to get only the signal of frequency equal to my rotational frequency [...]?"

Here I understand you are trying to obtain the air-spindle RPM, validating your results by comparing them to a tachometer.

First you should calculate the possible maximum RPM for your air-spindle, applying maybe a safety margin and multiplying by 2 to obtain a more adequate sampling frequency (See Nyquist rate).

Depending on the ADC you are using you will need to apply an analog low-pass filter to eliminate the frequencies higher than your expected MaxRPM_inHz, in order to avoid aliasing.

By only doing this, you would have eliminated a lot of noise at high frequencies which are not of your interesest.

Now you need to look at the frequency domain to determine whether if that's enough to identify the rotational frequency at 40Hz (or other) just by taking the maximum magnitude.

If you need further filtering you will need to take into account noise sources:

I hope this information helps, Pedro

Not the answer you're looking for? Browse other questions tagged matlab fft filters or ask your own question.

2
How to set sampling frequency of an acceleration data set
4
Interpreting the FFT results of a structural vibration problem
0
How do I get excatly the same peak amplitude versus frequency when performing FFT?
0
FFT plot not matching the output wave
1
Analysis of vibration signals
2
Why MATLAB fft cos makes imaginary parts?
1
Perform non-power-of-two FFT using ARM CMSIS library
1
How to obtain the exact value of wavelength from a 2D FFT amplitude vs wavenumber plot like it is obtainable from 1D FFT amplitude vs wavenumber plot?