Say I conducted a numerical experiment -a time-dependent fluid simulation- and extracted a time-series of some variable. It looks like this: 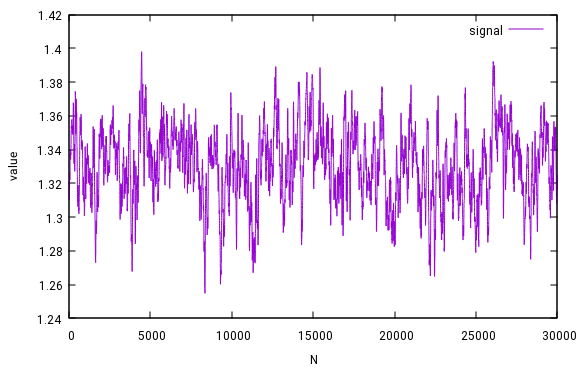 As a result of the simulation, I am supposed to report the mean value of this signal along with some estimate how accurate this mean value is from a purely statistical point of view. The Idea is: If I conduct the same experiment several times, I get different signals with different mean values. These mean values would be normally distributed. The mean value and standard deviation of this distribution are unknown.

Now if I could perform the experiment several times, estimating the variance of the mean would be straightforward. Then I could estimate some confidence intervals using Student's t-distribution. Yet since compute resources are scarce, this is not an option. All I have is this one sample.

tl;dr: Is there a way to estimate a confidence interval for the mean when all you have is one sample?

I was thinking about making use of the fact that the signals autocorrelation function vanishes rather quickly. But I haven't been able to turn this into a reliable method. 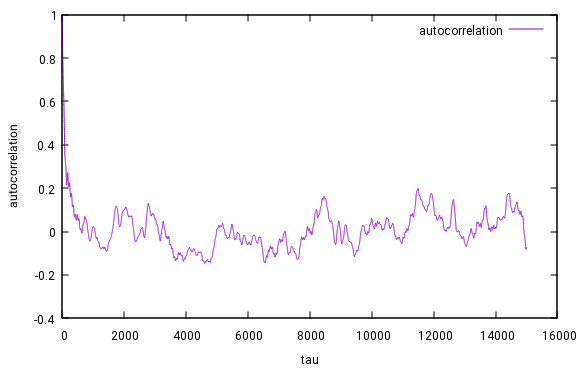 Assuming that you can estimate the variance from your sample using

NOTE: This is the unbiased estimator since the variance is being estimated from a sample of N elements using a mean that is estimated from the sample itself. (see Zwillinger, D. (Ed.). CRC Standard Mathematical Tables and Formulae. Boca Raton, FL: CRC Press, 1995.). Otherwise if the mean was known (which it isn't) there would be a $\frac{1}{N}$ in front of the summation above.

You should then be able to derive confidence intervals on the mean itself with the variance of the mean as $\frac{\sigma_x}{N}$:.

This is seen in the expression for the mean and variance of $Y$ where $Y$ is the average of $X$ over $N$ samples, as follows where $\mu_x$ is the mean of x and $\sigma_x$ is the variance of x:

How to make use of the Autocorrelation Function

Note that this reduction by N is valid as long as the sequence is white. Once samples are correlated, there will be no further reduction in the variance of the estimate. You can therefore make use of your autocorrelation to determine the number of samples that will reduce the variance. I do not have an exact calculation for this, but to provide a rough order magnitude I would use the number of samples that results in the normalized autocorrelation dropping to below 0.5. For example, in your data the total number of samples is 30,000. If the autocorrelion immediately dropped below 0.5 after just one sample, then all samples are independent and your variance estimate would be the $\sigma_x/30,000$. However if the autocorrelation does not drop below 0.5 until 100 samples, then the variance estimate would be $\sigma_x/300$.

Not the answer you're looking for? Browse other questions tagged signal-analysis autocorrelation measurement or ask your own question.

1
Most accurate way to find RMS of signals fundamental

5
Relaxation time in a stationary stochastic process
10
Designing a feature vector for discriminating between different sonic waveforms
1
Kalman Filter Estimate vs ACF Least Squares Estimate
2
Understanding the definition of mean/autocorrelation
1
How to calculate the entropy of random normally distributed samples?
0
How to determine a suitable threshold when using amplitude thresholding method for spike detection?
1
Help with literature pointers for improving estimation of underlying mean for signal with periodic noise