I have some sensors connected to an Arduino Due. The Arduino sends the buffer of data over the its SerialUSB connection. The last element of this buffer defines when are passed 1 seconds (it is 0 "inside" the second and a 1 on the second). In this way, in post processing, I can count the number of the sample revealed each second.

I usually don't lose any data. It doesn't a standard band and, as a consequence, it does not have a stable serial communication time. When I receive the wrong data, I discard it. In addition, the Arduino's clock is not as accurate, so it sometimes time-shifts the data.

What is the best way to stabilize my sampling rate in post processing?

Below is a histogram of the sample rate revealed by an experiment on my Arduino: 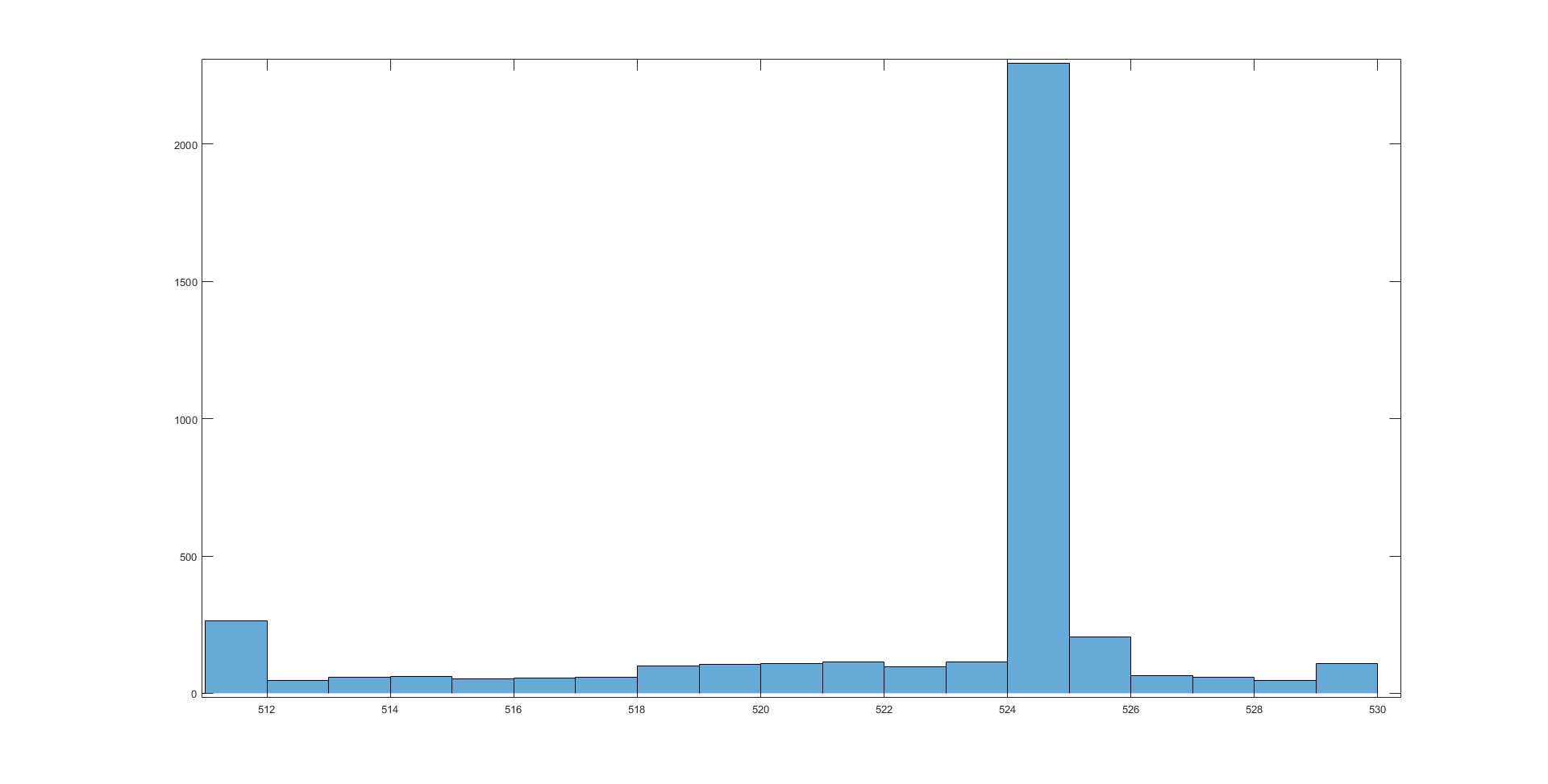 After some testing, I've noticed an Arduino procedure exists that requires a "variable" amount of time (according to its datasheet, the DS18B20 temperature sensor requires a specific amount of time to collect data and it is "odd" with the second clock).

Don't use a UART/RS232-style serial port to communicate numerical data, if you can at all avoid it. I don't know about the arduino you're using, but I worked with far less opulently equipped microcontrollers than what you'd typically find on an arduino board, and those often come with a USB controller, so that you "just" have to write a USB handler (or typically, use the handler offered by the manufacturer) to put data into USB packets. That way, you'd be able to use 1 Mb/s (USB1) or 12 Mb/s (USB2 full speed) on many cheap microcontrollers. Compare that to the 115.2 kb/s max that most of the serial port adapters do... if Arduino doesn't support that, it might be worth to look at the competitors of the beginner-friendly Arduino platform family (namely, ARM's mbed, for example). This applies twice if data corruption is an issue with your serial port. USB is really really robust, in my experience.

Now, generally, the answer to "some samples are missing" is either interpolation (ie. looking at surrounding samples and finding a nice one to fill the gap ) or compressed sensing (ie. guessing based on a metric of what is most likely for the signal you actually want to observe).

For varying sampling rate, you'd typically use some kind of clock recovery (which, at its heart, is usually also an interpolator).

Now, with your figure, I'd say: this data is probably not worth salvaging. Even if I take that large bar as "wrong" and just consider the others, your variations in samples are really large, and your 1 second granularity doesn't allow for sufficient info about the actual sampling rates in between. There's simply not enough info on when things actually happened, so that we can't reconstruct the original signal.

So, I'd say: sampling stuff has been done before, very often, and it might be a good idea to look at the firmware other folks wrote. The way you do doesn't seem to be fit for the purpose, whatever you're doing.

Not the answer you're looking for? Browse other questions tagged sampling resampling or ask your own question.

2
Why is the magnitude of the second component of my FFT spectrum always the largest one?
1
Finding the fundamental frequency from Autocorrelated data
1
Is it possible to do deconvolution with two data sets that have different sampling rates?
1
Non-uniform acquisition to fixed sample rate
0
Determining the features of the DSP
0
Sampling multiple sensors at different rates
1
Low-Pass Filtering of not evenly sampled signal
2
Conclusions of sampling around Nyquist Rate
0
Interpretation of sample rate