I'm trying to understand the way in which CDMA works. Once the transmitter bit sequence is spread it is modulated for instance using a PSK modulator. Lets assume BPSK is used. I'm particularly interested in the case in which there are 2 transmitters each with its own spread sequence, orthogonal to the other, so they don't mutually interfere . Assuming they both transmit to the same receiver at the same time using the same carrier frequency and BPSK modulation. How is the receiver capable of demodulating the BPSK signal in order to recover the bit sequence from both receivers so it can be passed to the respective de-spread stages where the original messages can be recovered?

To me the transmitters' information is divided in code, but codes can only be separated once they are bits not while they are "pass band symbols", right? And before they can be successfully recovered as bits, isn't there a lot of interference at the BPSK demodulating stage where phases from 2 BPSK carriers are being received at the same time? How can the BPSK demodulator demodulate useful bits under that circumstance? 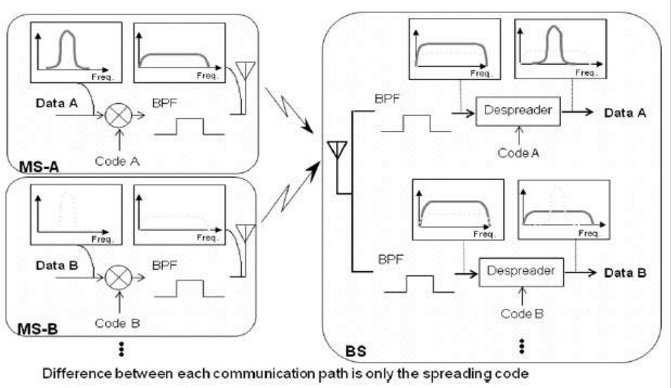 To me the transmitters' information is divided in code, but codes can only be separated once they are bits not while they are "pass band symbols", right?

I'm not quite sure how to continue this answer, other than saying, "please re-read the CDMA introduction you've been reading".

The whole idea is that you receive a sequence that is a superposition of the two transmit signals, and by correlation with the known spreading sequences, you can extract the bits from that.

Your spreading sequences are called $c_i$.

Orthogonality is defined via the inner product:

Now, let's assume perfectly orthonormal sequences, so that $<c_i, c_j> = \delta_{ij}$, i.e. the inner product is 1 only if you multiply a sequence with itself, and 0 for any other sequence.

Corollary, the $c$ span a vector space $C$ which contains all linear combinations of CDMA sequences; its dimension is the same as the number of possible sequences, since these per definition are orthogonal (and hence, especially linearly independent) and form a basis.

Notice that $T_i$ spans a vector space that has one dimension less than $C$!

Now, we simply consider $r$ to be a sequence of complex numbers.

What happens now if we multiply $r$ with the individual spreading sequences $c$? Let's do it with user $i$'s code:

How nice! The same works for every other user, too.

I was a bit pushing the vector space notion here: It's important to realize that all this simply happens due to linear algebra representing our signals. You can now also see why CDMA systems that support a high number of users get slower per user (simply because that dictates a higher number of base vectors of $C$, which dictates a higher dimensionality and thus, longer sequences). Also, it shows that CDMA on this theoretical level works with any linear modulation, since we simply need $S\subset \mathbb C$, i.e. $s$ just needs to be scalar.

Not the answer you're looking for? Browse other questions tagged demodulation bpsk spread-spectrum or ask your own question.

8
How to determine where to sample for demodulation of BPSK signals?
2
Non-coherent receiver for DBPSK: Implementation details
5
QPSK Modulation/Demodulation in C++
5
Phase synchronization in BPSK
4
Why are Gold codes and Kasami codes used instead of pure m-sequences?
4
Conversion between Eb/N0 and SNR in spread-spectrum modulation like LoRa CSS?
0
Phase transitions in GPS C/A signal