How to simply implement an all digital GMSK modulator with no multipliers? The implementation approach should be applicable to GMSK modulation with $BT=0.5$ or less (where intentional ISI is introduced to obtain higher spectral efficiency).

By "all digital" I am referring to the baseband modulation. The result will be IQ samples that fully represent the GMSK modulation at baseband.

The acceptable answer will be the simplest implementation with no multipliers needed that will generate a GMSK modulated signal that has a correlation coefficient with a "perfect" GMSK signal $> 0.999$ and a spectrum that will meet the spectral mask for GSM as shown in the plot below (which has a symbol period of $\frac{48}{13}\ \mu s$ (i.e., $270.8333 \ \rm kHz$), that I got from this website. 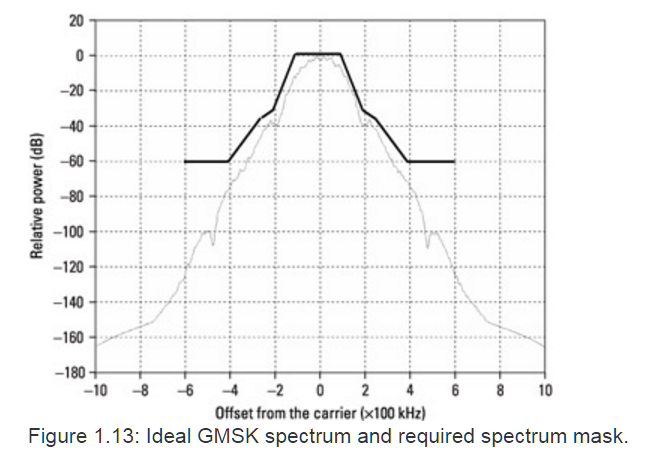 I don't actually have an answer, just ideas, but since this is a riddle, I might of contribute these as (hidden as spoiler text) hints for others, which might have ideas that I miss:

So, MSK is often introduced as

represented by a half-symbol time-offset BPSK on the I and Q components. That comes in very handy here (avoiding multiplicators) – BPSK can be implemened as $\pm 1$ on the respective axis. The idea is that at the boundary between symbols periods, the phase is continuous, which w.l.o.g cannot be realized in any other way than by having zeros exactly at the point where the other component carries the BPSK constellation point. Thus, the minimal viable MSK modulation has

as samples, with $s_n$ being the bits to be transmitted represented as $\pm 1$ differentially. That doesn't look very much like CPFSK at all, but one has to realize that the advance between two consecutive samples takes two different values:

Considering the phase difference of consecutive samples as the instantaneous frequency, we thus see that we get an alternation of a constant $-\frac \pi2$ between samples and either $0$ or $-\frac \pi2$, carrying the information. I'm not even convinced any more this fulfills the criteria for being MSK.

Since we'd probably want spectral symmetry, we'd employ the usual tricks to shift the signal in frequency by half the sampling rate (i.e. "multiplication" with $[-1\,+1\,-1\,+1\,\dots]$).

Oooh and I'd have an approach for the Gaussian pulse shaper, but that simply applies

the fact that repeated convolution of something with itself converges against a Gaussian – same reason the CLT works.

That means I can just cascade a set of moving average filters – all of which work without multipliers to get an approximated Gauss filter.

that my MSK approach above basically only allows 1 sample per symbol – but we might at least recreate the inter-symbol dependence characteristic of GMSK trellises.

Not the answer you're looking for? Browse other questions tagged modulation dsp-puzzle gmsk or ask your own question.

2
From IQ signal to FM modulated carrier, how its done?
1
Pulse shaping filter for FSK