The second criterion implies that $T_u = 1/\Delta f \gg T_{CP} > \tau_m \implies \Delta f \ll 1/\tau_m \sim B_c$ where $B_c$ is coherence bandwidth, this is flat fading definition. I means that flat fading is a consequence of the design criterion, not a criterion itself.

But in this wikipedia article Wikipedia's Fading Article, it is said that

Since different frequency components of the signal are affected independently, it is highly unlikely that all parts of the signal will be simultaneously affected by a deep fade.Certain modulation schemes such as orthogonal frequency-division multiplexing (OFDM) and code division multiple access (CDMA) are well-suited to employing frequency diversity to provide robustness to fading. OFDM divides the wideband signal into many slowly modulated narrowband subcarriers, each exposed to flat fading rather than frequency selective fading.

It seems that flat fading is the design objective.

If a portion $B_c$-wide is in deep fade, all subcarriers in that $B_c$ are in deep fade, I am not sure that increasing diversity is the purpose. I mean : could 50 errors per 100 bits be better for channel coding than 5 error per 10 bits?

Now I look at the time domain, $\Delta f > B_c \implies T_u < \tau_m$. As being visualized in figure below, nothing bad happens. We can capture all the energy from all physical paths. Is there any explaination if we look only at the time domain? 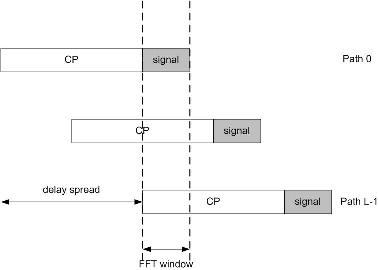 Update : I am doing some math to see how the flat fading condition leads to single-tap equalizer.

The signal at TX after IFFT :

Could someone tell me in which step I did use the condition flat fading $\Delta f < B_c \sim 1/\tau_m$ to come to single-tap equalizer model ?

Your mathematical derivation is correct, your $H[k]$ is the single-tap equalizer (i.e. one tap for each subcarrier, and the subcarriers do not mix with each other. That's the orthogonal in OFDM).

Let me try to explain this a bit more general, without going into coherence bandwidth and flat fading. To my understanding, explaining it with $B_c$ and flat fading is a bit superficial and undergraduate explanation, such that you understand the idea, but can't really prove it works. Even, the coherence bandwidth is not strictly defined, how can one design a system according to that?

Assuming that the channel is time-invariant over all times, the channel is an LTI system. The eigenfunctions of LTI systems are complex exponentials (of all frequencies). Note that these complex exponential range over all times (i.e. they are infinitely long). So, in principle, one could transmit data on all frequencies (infinitely small apart), but one would have to wait infinitely long until the signals arrived. The principle bases on the convolution theorem, i.e. your channel in time-domain does a convolution, so in frequency domain, it's doing elementwise multiplication. That's the continuous-time principle of OFDM. Clearly, not very attractive for practical implementations.

Here's the solution: The impulse response of the LTI system (i.e. the channel) is usually not infinitely long, but has a length $T_C$ (at least, we approximate/assume that it's zero for $t>T_C$). If the channel has length $T_C$, then for a given point in time $t$, only the signal times from $t-T_C$ to $t$ have an influence onto the output signal at the current point in time. So, we dont need to transmit infinitely long complex exponentials, but just of length $T+T_C$, and we get orthogonality in the time interval $[T_C,T+T_C]$.

You see where this is leading to, right? The extra time in the beginning is what we denote as the Cyclic prefix. Why do we call it cyclic? Because, the exponentials with frequency distance $1/T$ are periodic with period $T$. So, the signal in time $[0,...,T_C]$ is exactly equal to the signal at $[T,...,T+T_C]$.

To summarize: Transmitting complex exponentials of duration $T+T_C$ over an LTI system with impulse duration $T_C$ yields orthogonal signals over the interval $[T_C,...,T_C+T]$. Orthogonal means single-tap equalization is possible. What is the coefficient for the equalizer? Due to the convolution theorem, it is just the value of the frequency response of the channel at the carrier frequency.

This is the time-continuous explanation, which can become intuitive. However, I personally like more the discrete-time explanation, using linear algebra.

Finally, we go to the frequency domain:

Let's have a look at the $N\times N$ matrix $DHC$: It's a matrix that performs circular convolution with the impulse response of your channel. In finite-discrete time the Convolution theorem states, that circular convolution equals elementwise multiplication of the DFTs. So, $FDHCF^H$ is a diagonal matrix, containing the frequency response of the channel on the diagonal. There you have your single-tap equalizer again (inversion by diagonal matrix is just division by the diagonal).

There's a lot of very valid aspects that you touch, but from what I've learned (and experienced having fun with OFDM SDR transceivers), the main reasoning to do OFDM is having a narrow-channel multicarrier system with low complexity. Let me elaborate:

So the point is not really whether you have 5 in 10 bits wrong or 50 in 100, the point is that not having that single bit wrong gets easier – for the channel state estimate, you'll only need to estimate that single complex number per subcarrier, that's relatively efficient, and even more, the whole equalization process is just as many multiplications as there are subcarriers, each frame, so it's really one multiplication per DFT sample.

Now, if you needed to implement an equalizing FIR, the length of that FIR would contribute quadratically to the complexity – and so, you'd avoid that.

8
Practicality of the assumption of i.i.d. for Rayleigh channels
2
Why do we need FFT pairs for OFDM?
1
Is sparse signal in time domain is sparse in Frequency domain