I'm studying image processing and I know that there are different filters you can apply. I don't understand the difference between the low-pass/bandpass/notch filter (or high-pass/band-reject/notch). I tried to draw them but I don't know if I did it correctly: 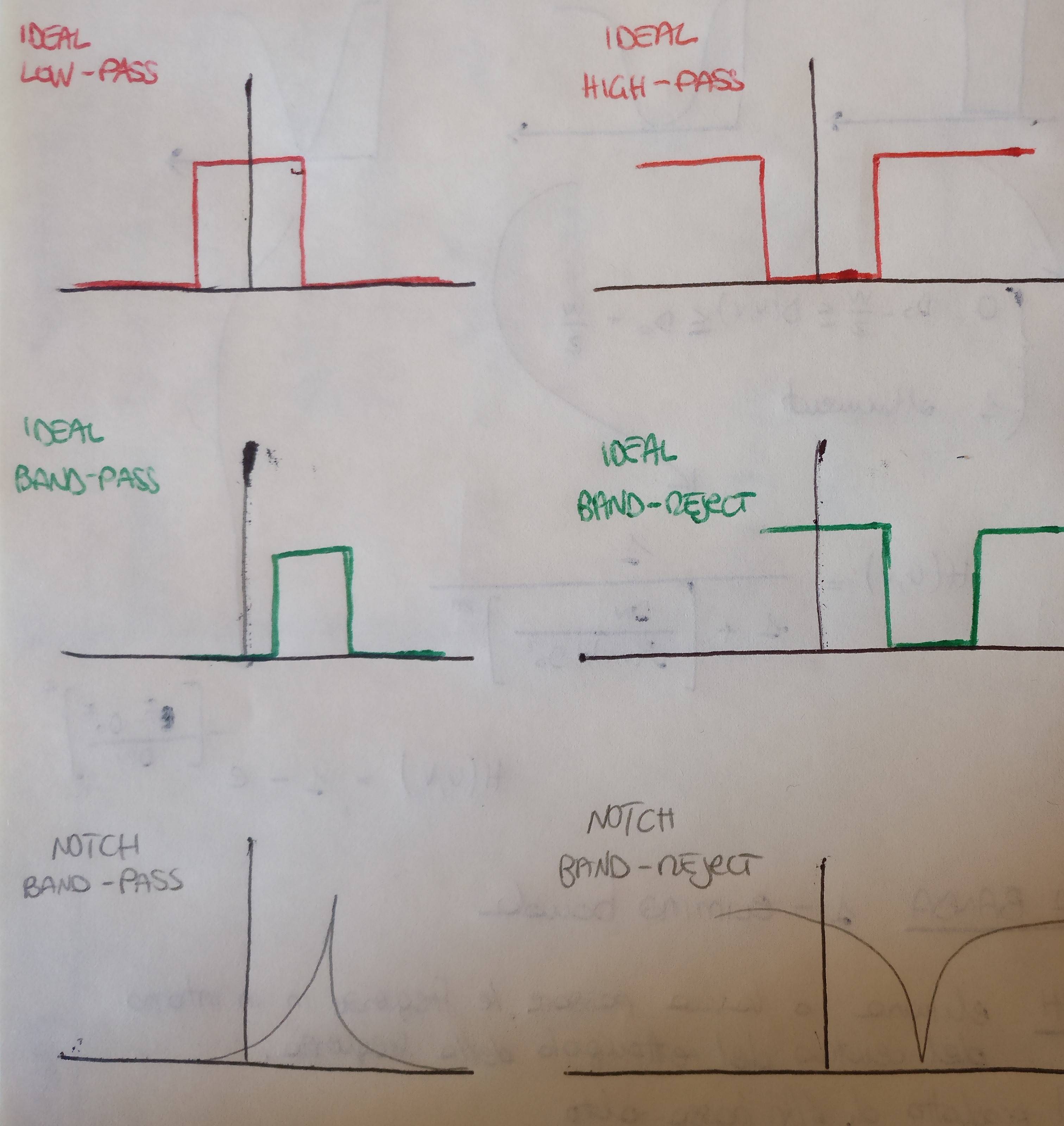 But I have not really understood the purpose of the notch filters. I realized that there are notch band-pass and band-reject notch. In addition the book I'm studying (Digital Image Processing - Rafael C. Gonzalez) says that a notch filter is composed of the product of two high-pass filters. Just I don't understand how they work, how they are made and what they do.

The book also talks then about optimal notch filters that is used where there are several interference components in the image in the Fourier domain. Again I haven't understood how it works.

Could someone help me? Thank you very much!

So the difference between a notch filter and a band-pass is that I use the notch when I don't know what are the frequencies to pass (or delete) but I get it visually analyzing the image of the Fourier transform, right?

However, this is what there are written in my book: 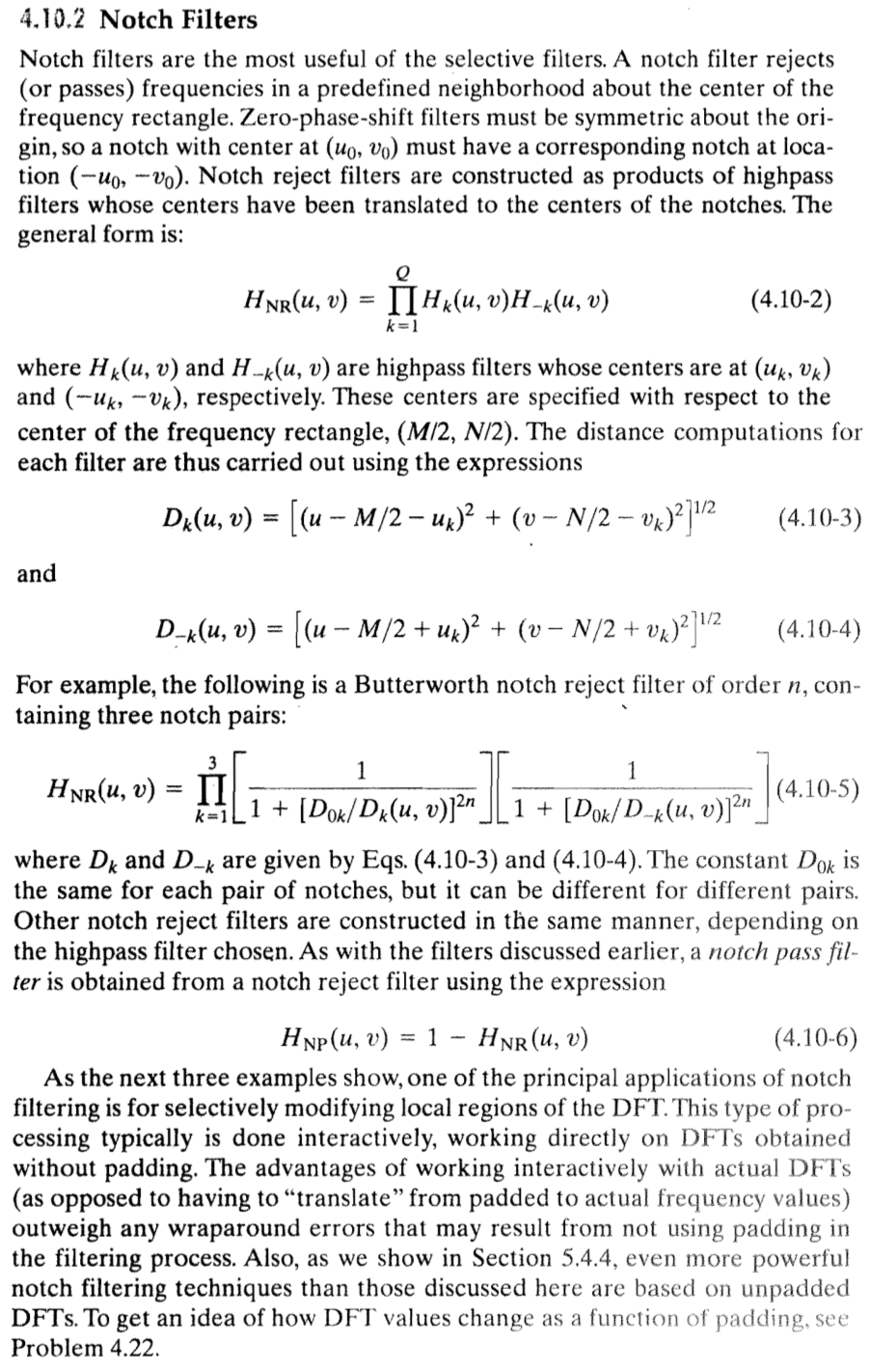 First,note that your drawn filter responses are one dimensional filters.

Notch filter, selectively suppresses some frequency bands that are not of interest. One of the well known applications of notch filter in image processing is image denoising. As an example, consider the following image, which is corrupted by periodic noise (the tiled parallel bars). 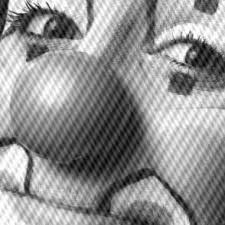 If we take Fourier transform of the image, it will be something like this: 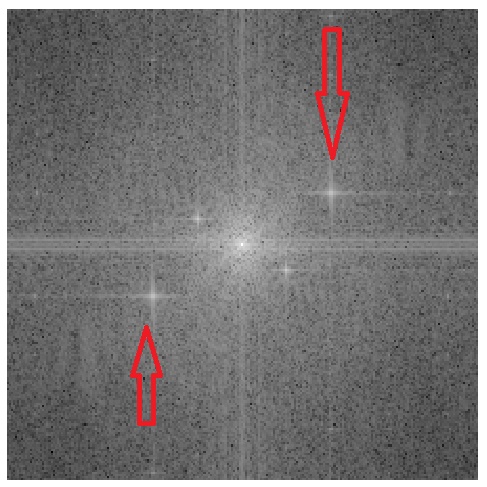 Based on our prior observations and knowledge we know this image should not have larges peaks other that central section, so those other peaks are the noise and are responsible for the parallel bars in the image. To remove those, we can apply a notch filter which allows all frequencies to pass, except for frequency components of the periodic noise.

I would say it is product of a low-pass and a high-pass filter.

Not the answer you're looking for? Browse other questions tagged image-processing lowpass-filter filtering bandpass highpass-filter or ask your own question.

1
low pass filter with minimal ringing
0
Slope of 2nd order low pass vs band pass Butterworth filters
1
How can I construct a Band-pass filter from a low and a high-pass filter?
2
How to convert a low-pass Gaussian filter to a high pass filter
5
Low pass vs band pass filter
2
Recommendation for studying filters
5
How to Classify Image Filter as Low Pass Filter (LPF) or High Pass Filter (HPF)?
1
Zero-phase-shift filters must be symmetric about the origin
2
Are high pass/low pass filters FIR filters?
0
What is the purpose of the recurrence relation in low and high pass (audio) filters?