By the Wiener-Khinchin theorem, we have a straightforward way to calculate the power spectral density for stationary noise. If we know the bandwidth of a system, we can further calculate the variance of the noise since it turns out that $v_{noise,\ RMS} = \sigma$ (standard deviation) for zero mean noise. Therefore, at each point in time we know the probabilistic distribution of noise as shown in this video: 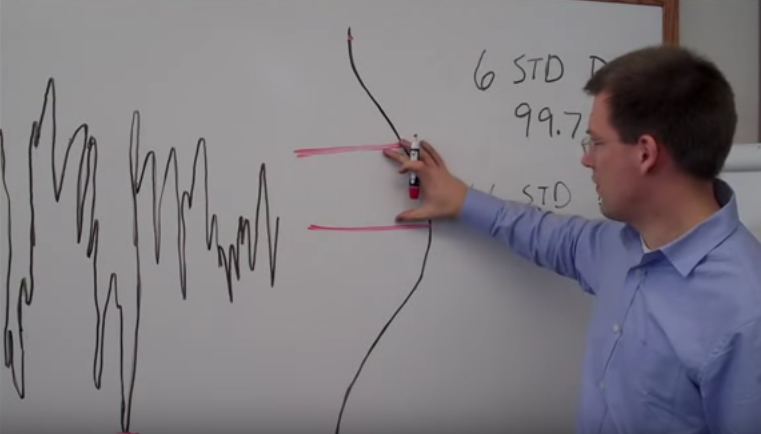 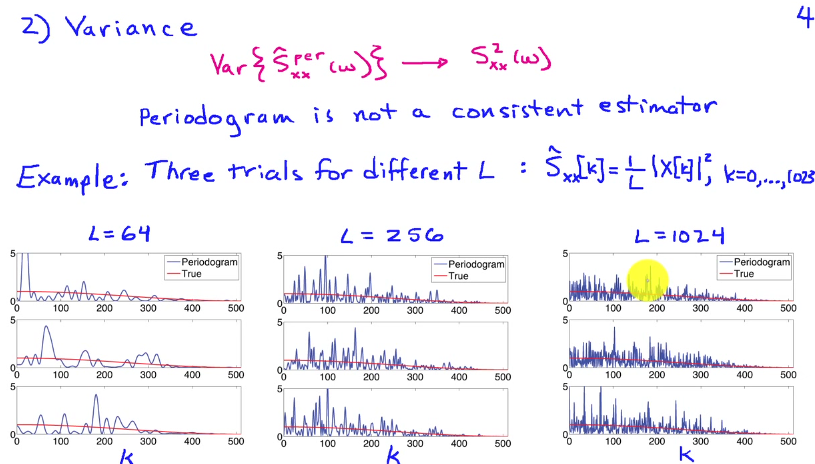 To make this more accessible (at least to me), let me switch to a linear algebra setting (i.e. the finite discrete-time case). The results can be straight-forwardly taken over to the continuos-time case. Let $\vec{n}$ be a realization of the noise process with autocorrelation $R_{nn}=E[\vec{n}\vec{n}^H]$. Let $\mathbf{F}$ be the unitary DFT matrix. So, $\vec{N}=\mathbf{F}\vec{n}$ is one noise realization in the frequency domain. Assuming that $\vec{n}$ consists of Gaussian distributed elements with zero mean, $\vec{N}$ also consists of Gaussian elements (A linear combination of two gaussian random variables remains to be Gaussian). What is the autocorrelation of the frequency-domain noise? It's given by

On the diagonal of $R_{NN}$ there is the variance of the Gaussians in the frequency domain.

So, the distribution of noise in the frequency domain remains to be a Gaussian, with variance given by diagonal on the above expression. I believe the diagonal is actually the PSD that follows from the Wiener-Khintschin Theorem. So, the final answer is:

The noise in the frequency domain is Gaussian distributed, with zero mean and variance given by the PSD of the noise. (Assuming zero-mean Gaussian time-domain noise)

In the video that OP linked, as well as here (pg. 22), it is derived that the variance of power is proportional to (and in the linked ref, equal to) the square of the mean power, i.e.

Distributions that follow the general relationship: $$var[ P(w)] =\alpha \bar P ^x(w)$$ are of the Tweedie family. In this case, the gamma distribution satisfies x=2.

A quick Python simulation with normally distributed noise where $$\mu=0, \sigma=6$$ corroborates this. The left plot is a histogram of variance computed over 4000 non-overlapping 1000-point time windows. Middle plot are the distributions of absolute Fourier amplitude, where each faint trace is the distribution at a single frequency (1000-point FFT). The right plot is the same, but for power (i.e. amplitude squared). The mean of those distributions (not shown) is indeed 0.036 (which is the signal variance over the number of FFT points, 6^2/1000). We see that the distributions are heavily skewed, and resemble the form of gamma distributions, but that's about as much as I can say.

Therefore, I'm venturing a guess that the noise distribution in the frequency domain follows the gamma distribution. I realize that this is without any formal derivation, and I would love to see a derivation of this as I am also interested in this problem.

Lastly, with reference to the above (Maximilian's) answer: please correct me if I'm misinterpreting your response, but the noise in the frequency domain cannot be Gaussian distributed with zero mean, right? Because the mean is defined as the mean power at that frequency, which is proportional to the variance of the signal in time domain. Sorry, I don't have enough points to comment directly below the response.

Edit: the Fourier coefficient themselves, i.e. real and imaginary components, are distributed normally with zero mean and standard deviation scaled to the total signal power, but not the signal magnitude.

29
Variance of White Gaussian Noise
3
RMS averaging in spectrum analyzers
0
"Noise Spectral Density" a.k.a "Power Spectral Density" in datasheets
5
Power Spectral Density of Brownian Motion despite non-stationary
6
White Gaussian Noise Spectrum and Power
1
Given a noise power spectral density, how long does it take for the underlying process to deviate by a given amount?
0
Predicting distribution of integral of random process from power spectral density?
1
Effect of sampling a cont. stochastic process on the variance