I am a newbie in signal processing and would like to know the significance of using the abs() function and squaring the values received as an output of fft() function of Python's scipy.fftpack library, used when trying to plot a power spectral density for a dataset. I have found that many of code examples to plot a power spectral density do use an abs() and then square the values obtained thereafter.

Here is the code I have written till now to plot a power spectral density by referring some of the code examples,

Complex sines, or cisoids, $e^{iw}$ are fundamental functions for the study of linear systems, even if the latter are real. And the FFT is a fast algorithm for a discretized version of the continuous Fourier transform.

So when you apply an FFT, it provides you with a bunch of coefficients $c_k$, which can be positive, negative, or complex. We are often interested in the energy carried by these coefficients, defined as their squared modulus, which can be computed "complex number times conjugate equals square of modulus", or $c_k\times \overline{c_k} =|c_k|^2 $. This works with real numbers too. So instead of squaring up, you could as well multiply the FFT by its complex conjugate, pointwise.

Calling it "absolute value" is a bit of an abuse. This term is generally understood for real numbers only, and "modulus" would be a better term. However, abs is a very common term in this situation.

Note that sometimes, people are interested in the argument of the complex coefficients, and instead of 2D plots use the third dimension to "unwrap" the phase part, sometimes called phasor/polar representations: 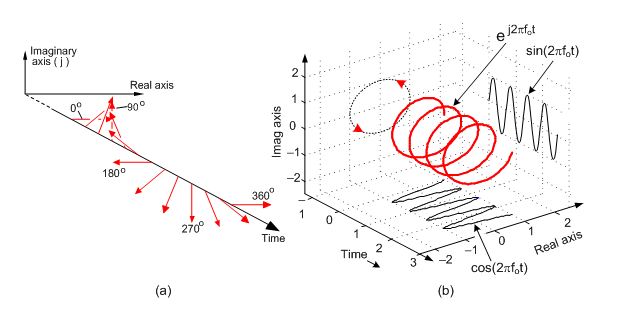 Not the answer you're looking for? Browse other questions tagged python power-spectral-density machine-learning scipy or ask your own question.