What I understand of Doppler spread is that the relative motion between Transmitter (TX) and Receiver (RX) change the exposing time of signal. In rapport to a constant-distance TX-RX, a moving toward each other TX-RX "compresses" signal in time (signal takes less time to propagate), then signal is "expanded" in frequency domain. Similarly, a moving away RX-TX "expands" signal in time and "compresses" its spectrum. In short, that is scaling Fourier Transform. These two extreme cases set the left and right bounds of spreading an original frequency between $-f_d$ and $+f_d$ where $f_d$ is max Doppler spread.

In looking at the Clarke model, it is just multiple propagation model with rich scattering environment and equal angle of arrival. (link for more details Clarke model)

If I understand well, there are two assumptions which are reasonale in urban environment: 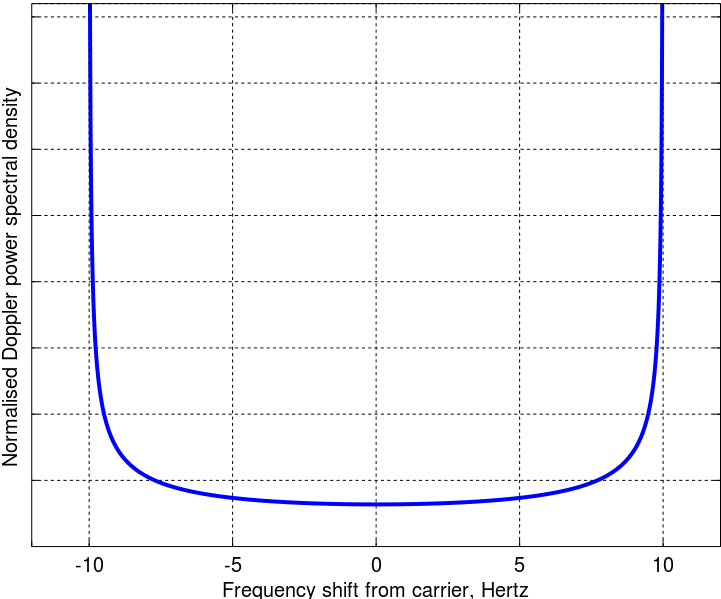 What I don't understand is that why energy is concentrated to the two extreme spread frequency $-f_d$ and $f_d$ while angles of arrival are uniform. Is there any physical interpretation ? What am I missing from the famous Clarke model ? Personally, this model seems well-model the typical urban environment.

Answers Although the answer of Carlos captures the most fundamental mathematical part, the real answer is in his comment about "mapping between angle and frequency". Moreover, the answer of Maximilian is interesting too.

A simple, "non-technical" way of thinking of it is the fact that the Doppler frequency is proportional to $\cos\theta$. The amplitudes of cosine, however, are not uniformly distributed, but are heavily weighted towards $\pm 1$. 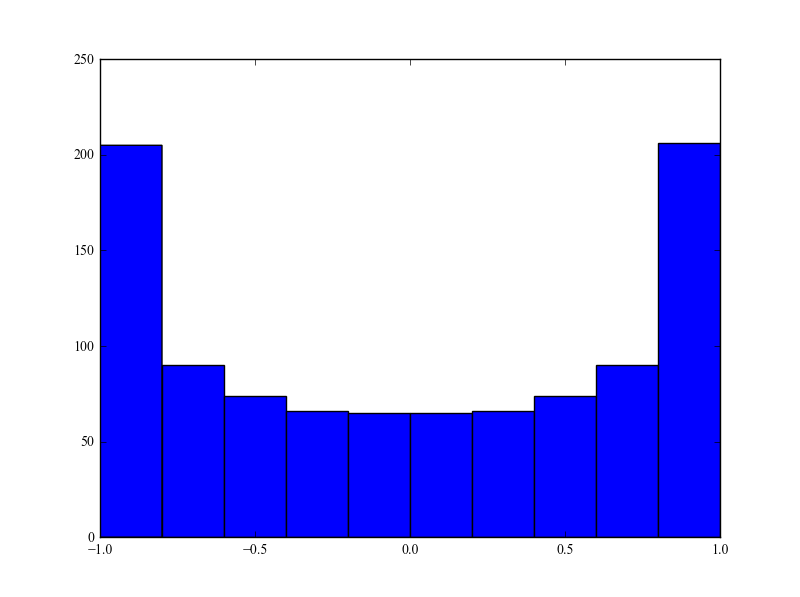 And the total power can be determined by integrating the above quantity, which is identically what defines a power spectral density.

In addition to Carlos answer, I want to correct your general understanding:

What I understand of Doppler spread is that the relative motion between Transmitter (TX) and Receiver (RX) change the exposing time of signal. In rapport to a constant-distance TX-RX, a moving toward each other TX-RX "compresses" signal in time (signal takes less time to propagate), then signal is "expanded" in frequency domain. Similarly, a moving away RX-TX "expands" signal in time and "compresses" its spectrum. In short, that is scaling Fourier Transform.

Your understanding is correct in the wideband-sense. However, Clarke's model refers to the narrow-band situation, where the Doppler spread is given by $f_d=f_c \frac{v}{c}$. In a wideband situation, you dont have a carrier frequency. In Clarkes model, you assume that the bandwidth $\Delta f$ of the signal is much smaller than $f_c$ and the signal is concentrated in $f_c\pm\frac{\Delta f}{2}$. In Clarke's model, each frequency experiences the same shift, i.e. X_{out}(f)=X_{in}(f-df), where $df$ is the instaneous shift, $X_{in},X_{out}$ are the Fourier transforms of transmit and received signal. This is approximately correct, as long as $\Delta f<<f_c$. In your wide-band model, each frequency experiences a shift that is proportional to the frequency, i.e. $X_{out}(f)=X_{in}(\alpha f)$ with $\alpha=\frac{v}{c}$.

EDIT: Let me explain a bit more in mathematical terms:

In general, given a sine wave with frequency $f$ which is sent to a receiver, where TX and RX have a relative speed of $v$, the sine wave is received with a frequency $f(1\pm-\frac{v}{c})$ (sign depending on direction of movement).

I dont want to say that the Doppler spread effect does not change the bandwidth of a signal. In fact, it spreads a signal by $f_D=f_c\frac{v}{c}$. However, the important distinction I want to point out is that in narrowband you can assume all frequencies experiences the same shift, whereas in wideband, the shift depends on the actual frequency. Clarke's model holds for the narrow-band case, as it describes the distribution of the frequency shift, when a sine wave with any frequency (within the bandwidth) is sent into the system.

Not the answer you're looking for? Browse other questions tagged power-spectral-density doppler or ask your own question.