I know it follows a complex envelope, but how do I know that I got a correct waveform based on my original signal?

Look at the magnitude and angle of the signal relative to your carrier and you should see the same thing you would see if you looked at your angle at baseband using the I and Q samples.

It is difficult to see anything with the carrier there (and I would never simulate with an actual carrier when I can do everything at baseband, just in case you put it at the carrier for simulation purposes). To inspect this waveform, I suggest rotating it to baseband by multiplying it by $e^{-j2\pi f_c t}$, low pass filter the high frequency component assuming your input was real, and then plot the complex signal on an I Q complex plot. (Real on one axis and Imaginary on the other). You should expect to see the signal moving through your 16QAM constellation points with a trajectory that depended on the pulse shaping filter used. Alternatively you could also look at the real and imaginary separately in an eye diagram.

Here are some plots I have showing that may help illustrate the different cases:

On the left is an eye diagram and the associated constellation diagram for QPSK, with two cases for the IQ (real-imaginary) constellation; one where it was derived from an incorrect sampling point (timing error) and the other where each symbol was properly sampled, as indicated by the vertical bars in the eye diagram. Note the eye diagram is simply our waveform versus time over one symbol period, plotted again and again (as in infinite hold on a scope) such that we see every possible trajectory from one symbol to the next, which is dependent on the history of all prior symbols over the memory of our channel.

On the right is the constellation diagram for 16QAM, where the large one is what it would look like with a carrier offset (similar to your case), such that it is essentially our 16 points spinning (which doesn't tell us much!), and the other is after removing the spin with $exp^{+j2\pi f_c t}$ or $exp^{-j2\pi f_c t}$ depending on which way the diagram is rotating. In your case with a real signal both spins are present, so multiply by either and low pass filter the resulting higher spin portion. One direction will have an inverted spectrum compared to other, so if you go the wrong way you may have an inverted result, but this is easy to undo by simply swapping I and Q). The smaller plot on the right is the resulting 16QAM constellation plotted as real vs imaginary of ONLY the correct sampling locations within each symbol were chosen (no timing error as in the QPSK case shown), but we do see evidence of phase error and some amplitude error (hence the spreading of the dots), as well as the possibility of other distortions such as multipath etc causing intersymbol interference; all having the effect of increasing the size of the dots in our constellation (leading to errors!). 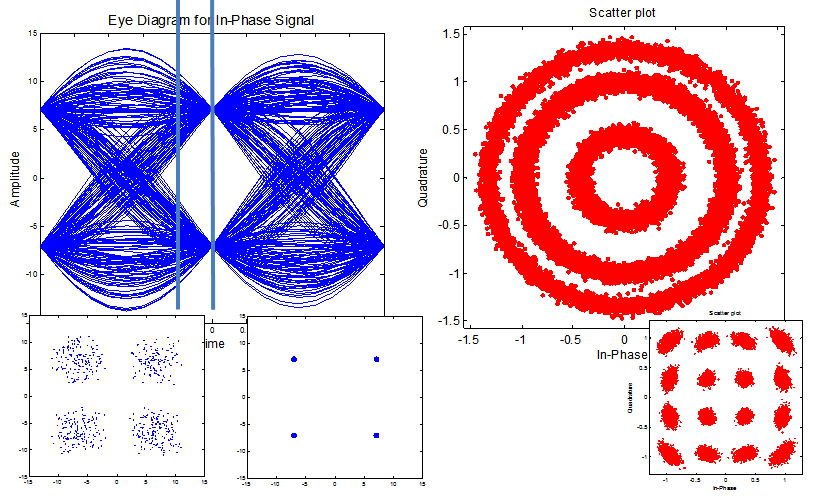 Below is another example for QPSK showing the constellation and eye diagram side by side, and also showing the significance of sampling at the correct sample positions (in red) versus the overall trajectory of the waveform. 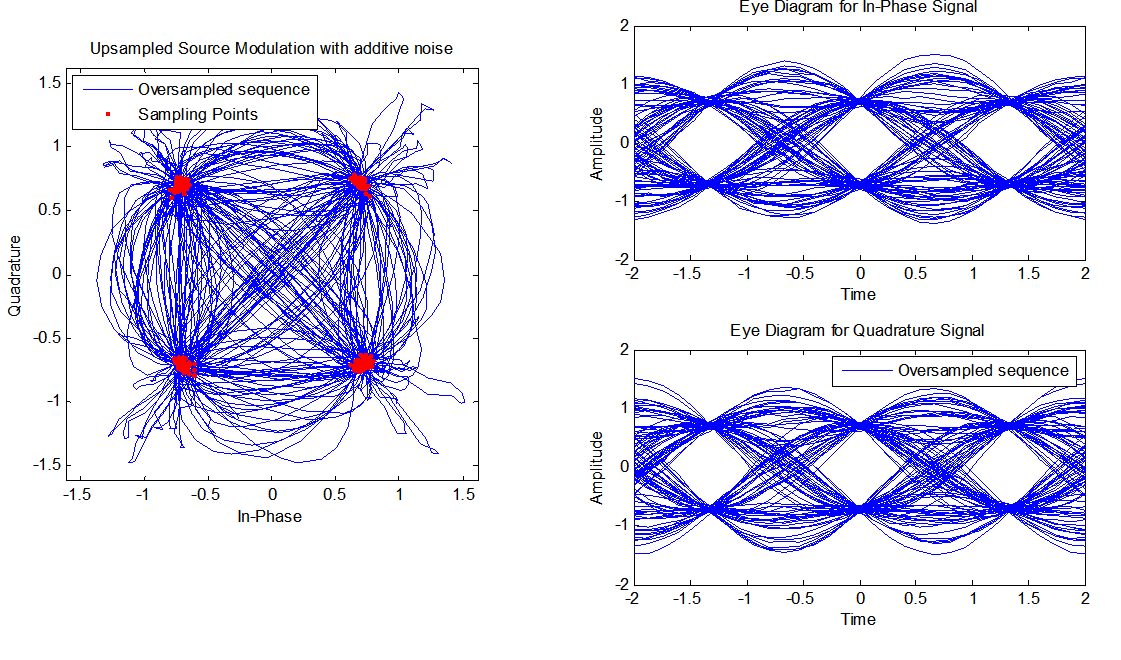 And finally here is an example eye diagram for 16 QAM: 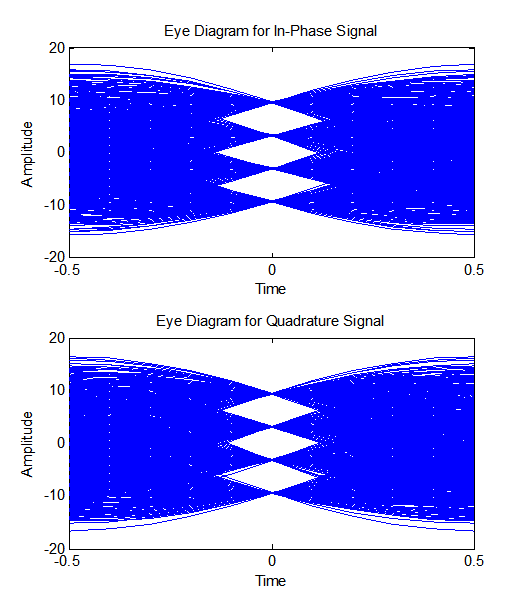 Multiply your signal by the 36 KHz carrier (in phase with the signal you used to multiply up; basically the same signal), low pass filter to a reasonable value greater than your modulation rate (2x or more would be fool=proof) but sufficient to reject the high frequency signal at 2x36 KHz. The resulting signal will be your original QAM modulation.

Not the answer you're looking for? Browse other questions tagged matlab digital-communications modulation digital or ask your own question.

0
Why the correct probability for a square M-QAM is equal to the square of correct probability of ($\sqrt M$)-PAM?
0
QAM Constellation Construction - Basic 4/8 QAM
2
Creating an Eye Diagram for QPSK Simulation
1
Relation between Normal Phase Shift of a wave and Phase Modulation
0
GNU Radio QPSK 4 Symbols
1
About the BPSK signal waveform
1
How to generate IQ component for transmitting 2FSK
0
Blind Carrier Synchronization