The physical meaning of comparing the phases of two signals with *different frequency*?

I was examining my simulation data about vibration. I was trying to compare the displacement phase difference between two cylinders; the cylinders carry out nearly sinusoidal vibrations. However, I just figured out that at certain conditions, the dominant displacement frequencies of two cylinders are different (i.e. C2 has dominant frequencies at both equivalent and two times of the C1's frequency), although in most cases, their frequencies are essentially the same.

So my question is: is the phase difference (e.g. in phase, in anti-phase) still physically meaningful when the frequencies are different?

Appreciate any explanation. (I think some physical examples would be very helpful)

Edit: found a discussion here, but still trying to understand.

where $x_1(t)$ and $x_2(t)$ are two periodic signals of different frequencies.

However, there are some phase-like analysis one could perform, depending on the application. I'll talk about two examples that come across my mind quickly. 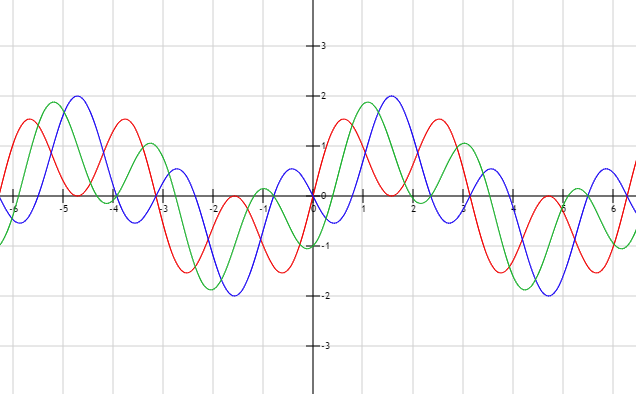 As you can see, there is a strong dependence on the value of $\phi_0$. This would be very important in music, for example, as the resulting wave would have a pretty different sound depending on the "phase" between the harmonics.

Following the same example, there is another way to see the phase between these two signals. Take for example the case in which $\phi_0 = 0$: 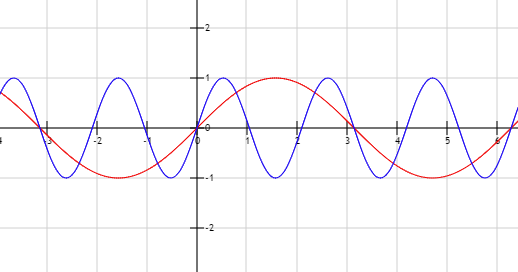 As you can see, whenever the fundamental wave crosses the $t$-axis, its 3rd harmonic also does. On the other hand, whenever the first one reaches a maximum (a minimum), its 3rd harmonic reaches a minimum (a maximum). This could lead to one thinking that they are in anti-phase. Again, this depends on what your application is and what you are looking for doing this analysis, as well as on what you define as "phase".

As a sidenote, there is a typical example that uses the phase between two waves of different frequencies (or something like that). It's called PLL (or phase-locked loop). You can check that out if you are interested in the topic.

The phase difference of two different frequency signals that are not rationally related is only meaningful when both are referenced to a particular reference point in time.

If the two frequencies are rationally related (harmonics at integer multiples, for instance), then the phase relationship (at some common reference point) will affect the shape of the periodic waveform in the time domain.

The phase difference might be physically meaningful if the two different frequency signals are somehow coupled, and thus produce a "beat note" or interference pattern as the phase relationship changes. The phase relationship will affect the envelope of the interference pattern, also when referenced to some external point in time (e.g. where/when the beat frequency envelope is at its maxima, etc.)

Not the answer you're looking for? Browse other questions tagged fft phase or ask your own question.