In the radar literature, particularly in older references, the term "video signal", "downrange video", or just "video" is used to describe the radar signal at a certain point in the processing chain. Also, I have come across the related term "video frequencies".

In older radars with analog processing, I interpret the "video signal" to mean the voltage as a function of time at the output of an envelope detector after downconversion from the carrier frequency.

In modern radars, particularly coherent pulse-Doppler systems, the term "video signal" seems to be equivalent to the general signal processing term "complex baseband signal" or "complex envelope", in that it contains an in-phase and quadrature component. Although sometimes I see plots of the "video signal" where the magnitude of the baseband signal is plotted versus time, which seems roughly equivalent to the envelope-detected signal of an analog radar.

I interpret the phrase "video frequencies" to simply mean the signal has been downconverted to be centered at 0 Hz.

Are these interpretations of the term "video" correct, and is there any other nuance I should be aware of?

You also see this on Spectrum Analyzers; "video bandwidth" for the same reason: the video is the output voltage from the power detector used to drive the vertical on a display (when the horizontal is the sweep), or in the case of the polar displays used to drive the radius where the sweep drives the angle. Since it is used for the display signal it is properly called the "video" signal. As I introduced, this is the same on a spectrum analyzer where we can adjust both "resolution bandwidth" and "video bandwidth": Resolution Bandwidth is the bandwidth of the effective bandpass filter prior to the power detector, while Video Bandwidth is the bandwidth of the effective low pass filter after the power detector. The first filter will reduce the total power incident on the detector when the input is spread as a spectral density, thus reducing the voltage out of the detector, while the second filter (video filter) will only smooth (average) the measured noise.

Here is a perfect picture showing what I describe in terms of the Spectrum Analyzer, credit Erik Diez of Agilent (now Keysight). http://electronicdesign.com/test-amp-measurement/fundamentals-spectrum-analysis 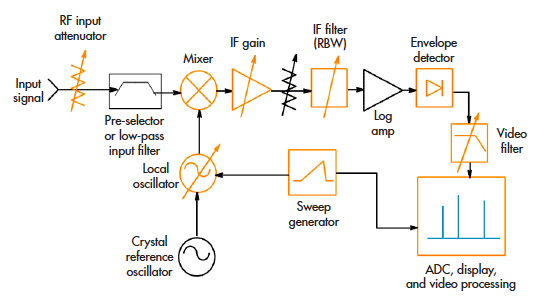 So for the case of radar, at least the original analog systems, the video output was a similar power detector used to drive one axis (either magnitude or as was common radius on a polar plot for a rotating system) of the radar output display. 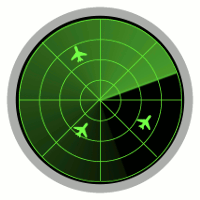 In addition to Dan Boschen's answer:

There's also a quick and dirty "practical" reason that one would use the term "video" and is especially true if working on older analog radar systems. People will tend to refer to the signal as "video" once the RF signal is processed by some analog or digital circuit therefore making it a "non-RF" signal.

Keep in mind that this type of jargon is used a lot by technicians and others who are quickly trying to distinguish which signal they are talking about. It's definitely a legacy term.

Not the answer you're looking for? Browse other questions tagged terminology radar or ask your own question.