How does the RaspberryPi radio hack convert digital GPIO signals to an FM signal?

After having looked at various explanation of how the RaspberryPi FM transmitter hack works, I realize there are some fundamental pieces missing. Most explanations talk about how to construct a digital signal from an analog one by Fourier's theorem, but never how the digital GPIO (3.3 Vpp) is constructed and used to modulate an FM signal.

I think a picture or more of how the resulting FM signal is built by the non-amplitude varied digital signal would be a helpful answer. I wish I had a proper DSO to see this myself, but I don't.

Note: In that hack audio transmission can be made specifically in the 1-250 MHz region, but the harmonics can be clearly heard all the way up into 1.1 GHz region. From comments here.

The closest explanation I can find is that of using PWM to Analog like in this picture:

But this doesn't halp much since it doesn't explain how the other half of the sine wave (the negative values) are generated?

and from what that code looks like, it initializes a clock generator to run at an adjustable clock.

Then, it uses the audio amplitudes to modify that clock's frequency in real time. PWM doesn't seem to be involved, aside from the program using the PWM unit to generate the regular event needed to trigger the reprogramming of the fractional interpolator (which is the aforementioned clock generator) by triggering a DMA transfer of the control word to the PLL control register.

This probably doesn't tell you overly much; think of it as

First, the answer to why you do not see a negative voltage is that the output being digital will range from 0 to the maximum digital voltage at the output (+Vs). This will have a DC offset of +Vs/2 which is simply filtered out with a high pass filter (series cap) resulting in a bipolar waveform with negative voltage after the series cap.

UPDATE: Based on Marcus' link that he provided in his answer, what follows is NOT how they actually did the FM transmitter in the Rasberry PI, but still valid as a possible approach. The actual implementation appears to be much simpler, leveraging an existing PWM spread-spectrum clock controller that is in the Rasberry-Pi. This device is typically used to help pass emission standards by reducing maximum transmitted emissions by spreading them, reducing overall power spectral density. Thus such a device could be used for FM transmission, in that it achieves it's spreading by changing the zero crossings (slightly) of the clock signal being spread. Thus if you can access the control mechanism for how the zero crossings are varied, you can achieve an FM transmitter.

The original response is below to show what could be done if a dedicated spread spectrum PWM clock controller was not available:

The implementation could be done with a numerically controlled oscillator in combination with a sigma-delta DAC. The NCO can provide precise frequency control as well as AM, FM, or PM modulation (you are using FM), and the sigma delta DAC can provide a multi-level analog output from just 1 digital bit.

Since FM is only concerned with zero crossings, it is also feasible that the sigma-delta is completely omitted for a very simple demonstration application in which case the NCO is implemented with a 1 bit output. This would have significant jitter however as the zero crossing will be limited to the crossings of your actual clock vs what is needed in the emulated waveform (as well as high spectral noise requiring more stringent analog filtering). Higher clock rates will reduce this but much more efficient to implement the sigma-delta architecture and in the process minimize that jitter; which is phase noise, which in turn is FM noise; however that jitter is easily quantified/predictable and perhaps with a sufficiently high clock can be shown to not be a concern.

In this post I give more details on the NCO specifically.

As for generating the analog output with modulation, the NCO is combined with a DAC as shown in the figure below which also shows all the modulation knobs (then commonly called a DDS or Direct Digital Synthesizer): 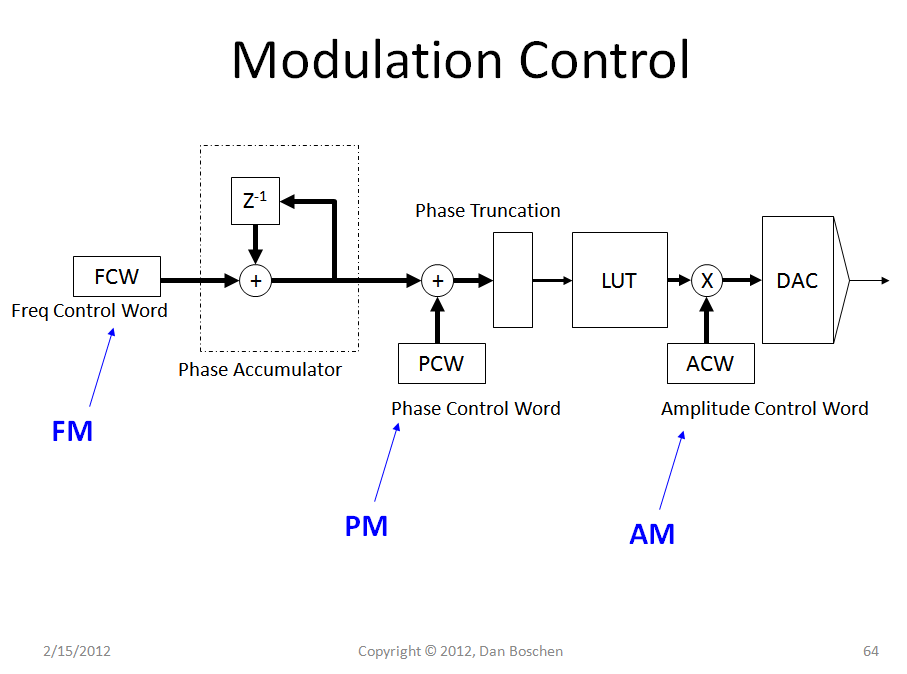 I have not reviewed the Rasberry pi implementation specifically to know if you are making use of an actual n-bit DAC, or if that portion is implemented with a PWM style DAC (Sigma-Delta Modulator), or if the MSB of the phase accumulator is used directly (either of the latter two is what I suspect based on the sketch you made describing the output). In the case of a Sigma Delta DAC, it could be implemented with a pass-band architecture such that the noise shaping is done to maximize the effective number of bits in your FM band (rather than a low-pass approach which would necessitate a very high sampling rate).

Further considerations for DAC reconstruction are given below, not directly related to a Sigma Delta approach but do show how it is possible to generate higher frequency outputs above the sampling rate of the DAC, based on post-filtering after the DAC output. 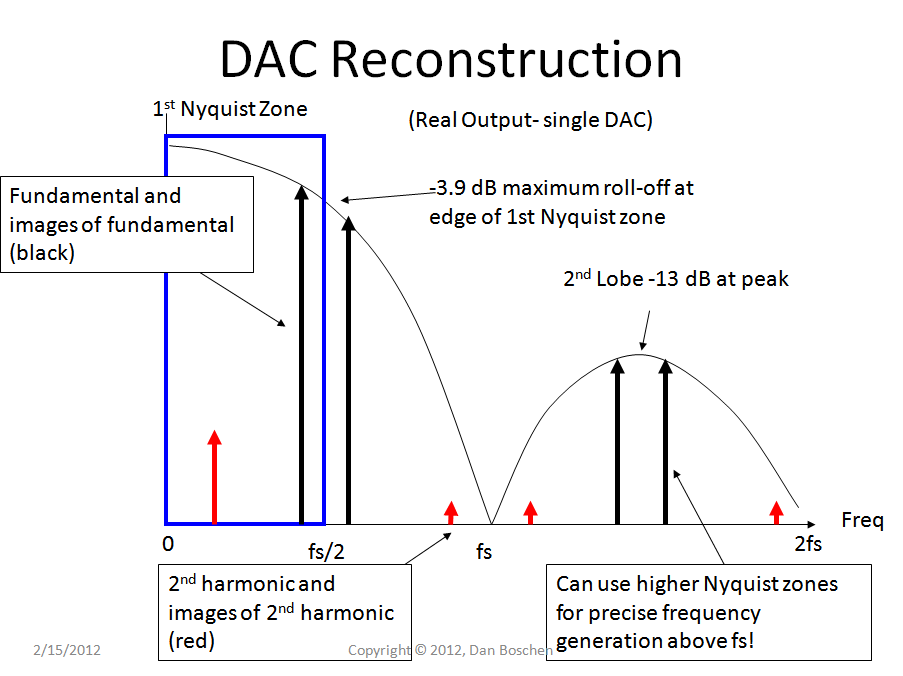 A very simple Sigma Delta DAC implementation is shown in the figure below. Combining this with the NCO structure above to generate the sample by sample digital word, using the FCW port as the FM modulation control can create an FM signal. As suggested above however, instead of a digital accumlator which is a low pass structure, an implementation can be done with a passband structure that would then allow selective noise shaping to suppress the quantization noise within your FM band of interest: 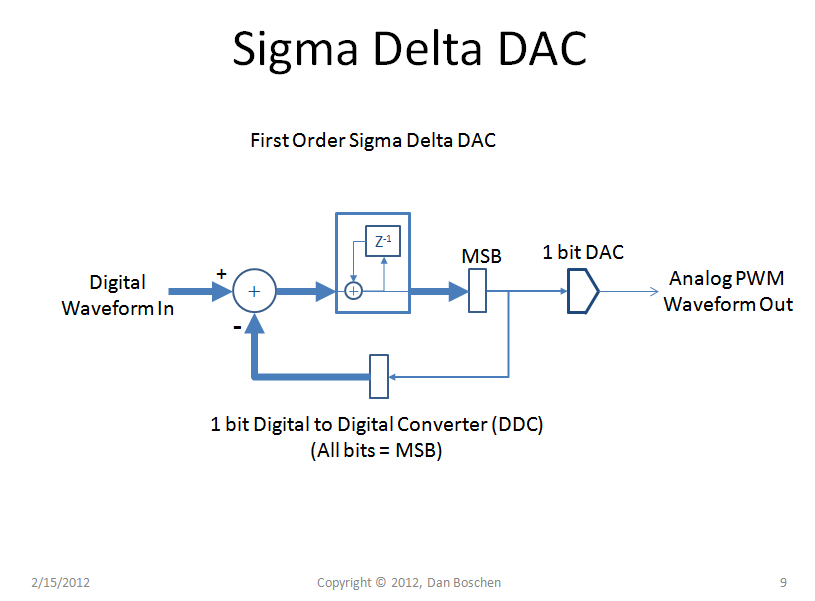 Not the answer you're looking for? Browse other questions tagged fourier-transform frequency-modulation digital-to-analog or ask your own question.

3
From a physics perspective, why does D/A quantization error result in a noise floor?
2
Does the inverse Fourier transform only produce stationary time signals?
1
How does the earphone cable in a mobile phone pick up the FM reception?
2
How to convert sampled real audio signal to it's IQ components for IQ modulation?
2
How does the world's simplest sigma-delta DAC work?
0
D/A converter with