Nyquist's Stability Criterion for linear-time-invariant systems makes use of Cauchy's argument principle to determine if any zeros in the characteristic equation are in the right-half plane (positive real roots), given a closed loop transfer function of the form:

$G_f(s)$ is the forward transfer function

$1+G_o(s)$ is the Characteristic Equation

Cauchy's argument principle states that if we take any analytic closed contour in the complex plane and plot the resulting function $G(s)$ with $s$ being the complex values along our contour of choice, the number of times the resulting plot encircles the origin in the same direction is equal to the number of zeros minus the number of poles enclosed by the contour. Such as the example image below from user Archibald on Wikipedia: If the five red dots were zeros and four blue dots were poles, the following contour would result in $5-4 = 1$ encirclement counter-clockwise. 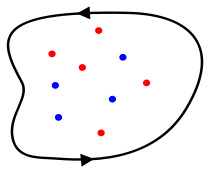 That said, the argument principle can be used as partial input to determine existence of zeros in the right half plane, by making the contour be the entire right half plane as depicted in the image below. We use a radius $R$ to enclose more and more of the right half plane (RHP), extending R to infinity, and in the limit, the entire RHP is enclosed. Thus by evaluating $G(j\omega)$ with $\omega$ from $-\infty$ to $+\infty$ we are enclosing a contour around the RHP and can therefore use the resulting plot as input toward determining how many zeros the RHP may contain (based on the resulting number encirclements of the origin). 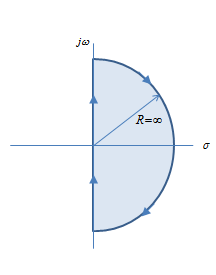 This is because the roots (zeros) of the characteristic equation are found from solving:

So the origin simply shifts and instead of encircling the origin as Cauchy's argument principle states, the result encircles $-1$. So Nyqist's Criterion involves determining number of encirclements of $-1$ after evaluating $G_o(j\omega) \forall \omega\in(-\infty,+\infty)$.

That said, without elaborating further on the complete process outlined by Nyquist to determine stability (although I gave most of it), here is the question:

We encircle the RHP by taking $j\omega$ from $-\infty$ to $+\infty$ and have convinced ourselves using a semi-circle with radius $R$ extending into the RHP with the limit of $R$ going to infinity and thus have correctly completed a clock-wise contour around the RHP in search of zeros using Cauchy's principle. However that seems somewhat arbitrary to say that positive infinity connects back to minus infinity by route of the right half plane. We could have just have easily convinced ourselves that with the exact same sweep along the $j\omega$ axis we are incorrectly taking a counter-clockwise contour around the LHP (by extending a radius into the left half plane and similarly taking the limit as R goes to infitiny- with no change to our sweep!); in which case we would not have encircled ANY of the zeros that we were looking to find. What is the intuitive explanation for this apparent signal processing mystery?

The Question (stated another way by Tendero)

To draw a Nyquist plot, one could write down a table with different values of $\omega$ and their corresponding values of $|G_o (j\omega)|$ and $\angle{G_o (j\omega)}$, and then draw the phasors with those magnitudes and phases in a complex plane, to finally join all the dots with a continuous line, getting the Nyquist plot. So the curve could be drawn using just the frequency response of $G_o(s)$ (i.e. $G_o(j\omega)$). Therefore, there appears to be no relationship between the Nyquist plot and the way in which we close the contour that includes the $j\omega$-axis: we just said that the curve depends only in the frequency response! How can this be explained?

Let's assume a rational open-loop transfer function $G_o(s)$ of order $N$ with no zeros or poles on the imaginary axis. Let $Z_l$ and $P_l$ denote the numbers of zeros and poles in the left half-plane, respectively, and $Z_r$ and $P_r$ are the numbers of zeros and poles in the right-half plane, respectively. We have $$Z_l+Z_r=P_l+P_r=N$$ and, consequently, $$Z_r-P_r=P_l-Z_l$$ If we use a closed contour moving clockwise from $-jR$ to $jR$ and then on a semi-circle of radius $R$ in the right half-plane back to the starting point ($-jR$), and if we let $R\rightarrow\infty$, then we encircle the complete right-half plane, and the number of clockwise encirclements of the point $-1$ in the $G_o(s)$-plane equals $Z_r-P_r$. However, if we were to move on a semi-circle across the left half-plane (on a counter-clockwise contour), the number of encirclements would equal $P_l-Z_l$, which, as shown above, equals $Z_r-P_r$. So no matter how we close the contour, the result and its meaning is always the same: $Z_r-P_r=P_l-Z_l$. Also note that the value of $G_o(s)$ doesn't change when moving on a semi-circle (of infinite radius); it always equals the limit $\lim_{|s|\rightarrow\infty}G_o(s)$, which is equal to the value of $G_o(j\omega)$ for $\omega\rightarrow\infty$; that's why we only need the values of $G_o(s)$ on the imaginary axis, and the way we close the contour (via the right or left half-plane) doesn't make any difference.

After reading Matt's resolution, I understood the puzzle (that was rather tricky by the way). I'll write a more formal demonstration for those who are interested:

Even though the two integrals lead to the same result, I think that using the LHP one would not be conceptually correct. The result is the same, as has just been proved, but the whole Nyquist plot procedure was made to know whether there are unstable poles, which requires to close the contour via the RHP. The fact that the other contour leads to the same result is by 'pure chance' (kind of).

Using infinity as a $point$ is really an abbreviation for a limiting process. If you draw a sequence of regions comprising an increasing portion of the $j\omega$-axis along with corresponding semicircular arcs lying in the RHP you will find using the Cauchy theorem a value for the number of zeros in each region. If there are no zeros in the RHP, each value will be zero, as is then the limit. If you were to do this with regions in the LHP, you would have different answers.

Not the answer you're looking for? Browse other questions tagged dsp-puzzle or ask your own question.

2
Can I set a constraint on the first tap of an FIR filter such that its inverse is stable?
0
Get minimum phase from function

3
How do you simultaneously undersample and oversample?
1
Z-Transform and DFT
1
Modelling zero padded OFDM as circular convolution between channel and FFT frame
3
Algorithm to Count Zeros Outside Unit Circle for FIR Filter