Is a filter/control transfer function with positive phase "causal"?

(with $\alpha>1$). Since the zero occurs at a lower frequency than the pole, the phase is positive approximately beteen $\omega = 1/\alpha \tau$ (the zero) and $\omega = 1/\tau$ (the pole), with the maximum phase occuring at the midpoint $\omega = 1/\tau \sqrt{\alpha}$. Typically it's used to increase phase at a particular frequency $\omega_c$ for stability.

In general, from the positiveness of the phase nothing can be concluded about the causality of the corresponding system. Note that the phase of the given system is

which is positive for all $\omega>0$ if $\alpha>1$. Yet the system is causal, which can be easily seen by calculating its impulse response:

Note that the system's phase is not only positive, but it also has a positive slope for $\omega<1/(\tau\sqrt{\alpha})$. This means that its group delay (the negative derivative of the phase) is negative in that frequency range, as shown in the figure ($\alpha=2$, $\tau=1$): 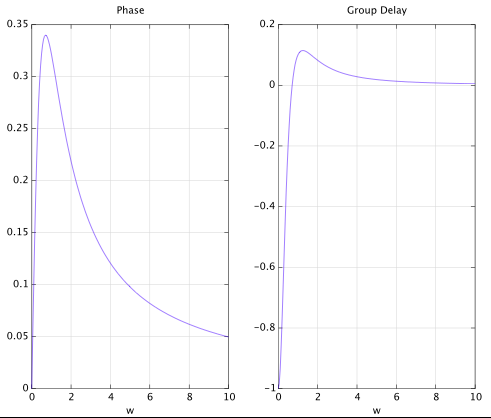 So even a negative group delay in some frequency range says nothing about the causality of a system.

A rational transfer function with all its poles in the left half-plane (as is the case in your example) and a region of convergence $\text{Re}\{s\}>0$ always corresponds to a causal and stable system, even if its phase is positive or its group delay is negative in a certain frequency range.

I like this question, and although I can not give an intuitive answer I can offer this example implementation to show how this case can exist (and perhaps this will help you or others provide more insight):

I tried an example case where the zero would occur before the pole in a typical lead filter implemented digitally. The pole zero map would appear as in the figure below, and to use actual values I set the zero at z=0.8 and the pole at z=0.5: 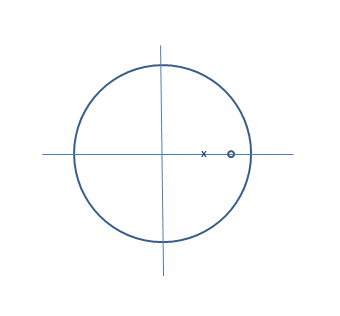 The transfer function for this case is given as:

Which I show in the block diagram below:

And using freqz([1 -.8], [1 -.5]) we can view the frequency response confirming the leading phase characteristic, and from the block diagram implementation, for a causal system. 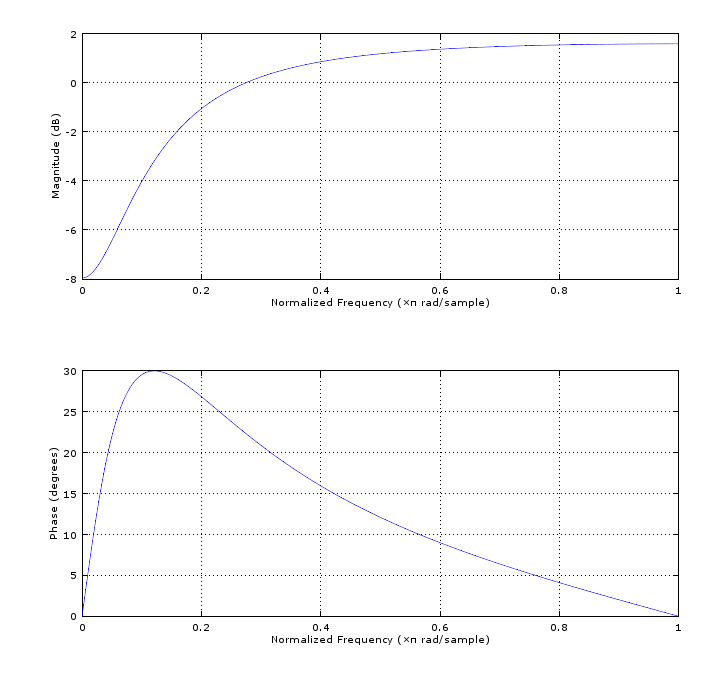 Also from the analog world consider the case of a series inductor with impedance $X_L= sL$, which is therefore also leading in phase (voltage leads current in an inductor, while voltage lags current in a capacitor). That too is for a causal system but has a leading phase.

Not the answer you're looking for? Browse other questions tagged phase linear-systems control-systems causality or ask your own question.

16
How to deal with a negative pole (unstable) in the pre-filter of a control system?
4
What is the difference between a lag compensation and PI control?
3
Control design: under what conditions can closed-loop poles be placed arbitrarily?
10
What is the easiest, most straight-forward way to prove this about minimum-phase filters?
8
Physical Meaning of Negative Group Delay for causal LTI systems
5
What are the properties of continuous-time improper systems?
1
Why if I place the zero of the lead compensator at lower frequencies, do I obtain a resonance peak?
2
What characterizies 'causality' for a finite FFT?
3
Effects of delay in a discrete-time controller for a continuous-time plant