Why is the lowpass-filter coming right after the local oscillator when mixing an RF?

In the book, instead of having a band- or lowpass-filter before mixing, it's coming right after mixing, which makes sense, considering there's gonna be a high-frequency component, which has to be filtered out.

But the lowpass-filter is called RF Image Rejection Filter, which irritates me, since that would be a band-pass instead and not something done after, but before mixing.

Curiously, afterwards there's an IF Band Selection Filter, which is meant to filter images? 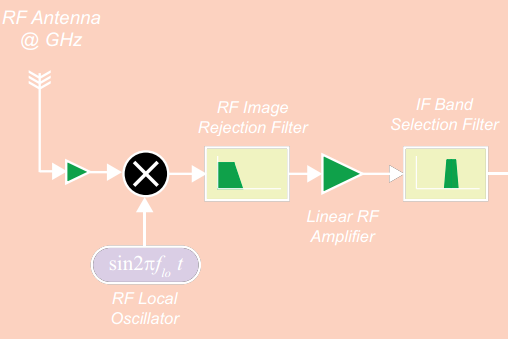 Today I received an answer from the authors of the book. It turns out that figure 1.7a was wrong, and they sent me the updated one.

The corrected diagram will be added in this Summer's update!

Not the answer you're looking for? Browse other questions tagged lowpass-filter highpass-filter or ask your own question.

3
A Simple Lowpass Filter Behaving so Strangely
3
Why do we need to have unity gain at DC for a lowpass filter?
0
What are the values on the x-axis when I plot the impulse response of a lowpass filter?
2
Kalman filter after lowpass filter: bad idea?
3
Why analog anti aliasing filter is used before analog to digital converter when there is already a digital filter after ADC?
2
Why is my signal attenuated after applying a HighPass-filter?
0
Verifying the result from lowpass filter