I was making some gifs of Mobius transformations in Matlab, and some strange patterns began to appear. I'm not sure if a deeper knowledge of the filetype/algorithm is needed to understand this phenomenon, but I thought that there could perhaps be a purely mathematical explanation. The image is obtained by coloring the complex plane like a checkerboard, and then inverting it by taking the reciprocal of the complex conjugate. Here is the math psuedocode for the image with a given zoom $k$:

Generally, such spectra can have a certain support; the support is the minimal interval outside of which the spectrum is 0.

If you now use an observing system whose ability to reproduce frequencies is limited to an interval that is smaller than said support (which often is infinite, by the way, and always is infinite for signals that have finite extension in time or space), you can not represent the original signal with that system.

In this case, your picture has a certain resolution – which is, in the end, the fact that you evaluate the value of your function at discrete points in a fixed, non-infinitesimal spacing. The inverse of that spacing is the (spatial) sampling rate.

Thus, your picture cannot represent the original signal – it's simply mathematically impossible that the mapping of underlying function to pixels is truly equivalent to the original function, since we know that in this case, the total range of frequencies representable by your evaluation at discrete points ("sampling") is half the sampling rate, and thus, something must go wrong with the part of your signal's spectrum that is above half the sampling rate.

Take the "large" structures from your picture that I've painted green: 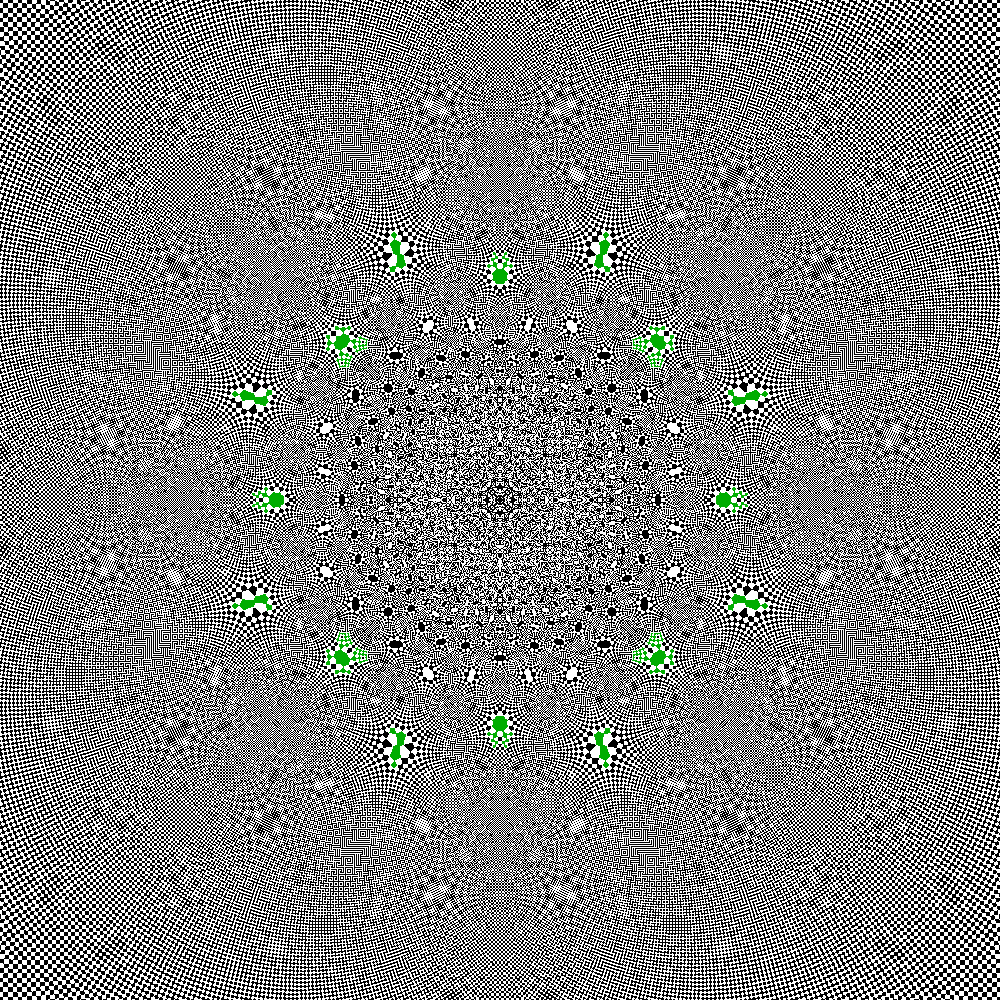 It certainly looks like there is low-frequency content here - but in reality, it's just the high-frequecy content at frequencies $>\frac{f_\text{sample}}2$ that got aliased to low frequencies, since it was close to an integer multiple of the sampling rate.

So, yes, you can predict the artifacts that happen to a 2D signal when being sampled by comparing its Fourier transform to the bandwidth offered by the sampling rate.

Not the answer you're looking for? Browse other questions tagged image-processing aliasing pattern or ask your own question.

12
Is this a correct method for fixed pattern noise correction?
1
Why does cel-shading sometimes look similar to rotoscoping?
2
what's gaussian noise look like?
5
Why does this image look so bad when dithered with a certain palette?
0
Transform RGB image to *look like* Infrared
0
What does it mean that the DFT equals the Complex Fourier Coefficients for even frequencies?
1
Why does my sinusoid look "AM" in shape?
1
What does this paragraph mean?
0
What does the visual representation of matched filtering of images look like?