How to keep phase response of IIR filter?

We know that IIR digital filter has nonlinear phase response in general.

How can I linearize the phase response of IIR filter without altering its magnitude response?

To my knowledge, you can't linearize it arbitrarily, but that being said, you can obtain approximately linear phase by processing the output through a cascade of all-pass filters.

An all-pass filter used this way is usually called a phase compensator or a phase equalizer. A single pole-zero all-pass IIR filter has the following structure $$ H(z) = \frac{p - z^{-1}}{1 - p z^{-1}} $$ where $p$ controls the location of the pole/zero. You can optimize a cascade of filters of this type to equalize your phase response using least squares or some other filter design technique.

As described in hops's answer, in principle it's always possible to approximately linearize the phase of a given IIR filter in a specified frequency region by cascading it with an allpass filter, while leaving the magnitude response unchanged. However, this approach is not optimal in the sense that the total required filter order becomes unnecessarily large, and, consequently, the filter is not as computationally efficient as it could be.

Instead of splitting the design process in two phases (first IIR for magnitude approximation, second allpass for phase equalization), an alternative approach can be taken where an IIR filter is designed to directly approximate the specified magnitude and phase responses. There are several algorithms to achieve this. Take a look at this thesis (ch. 5) and the references therein.

The figure below shows a comparison between the first approach (IIR + allpass, dashed curves) and the direct approach (complex approximation, solid curves): 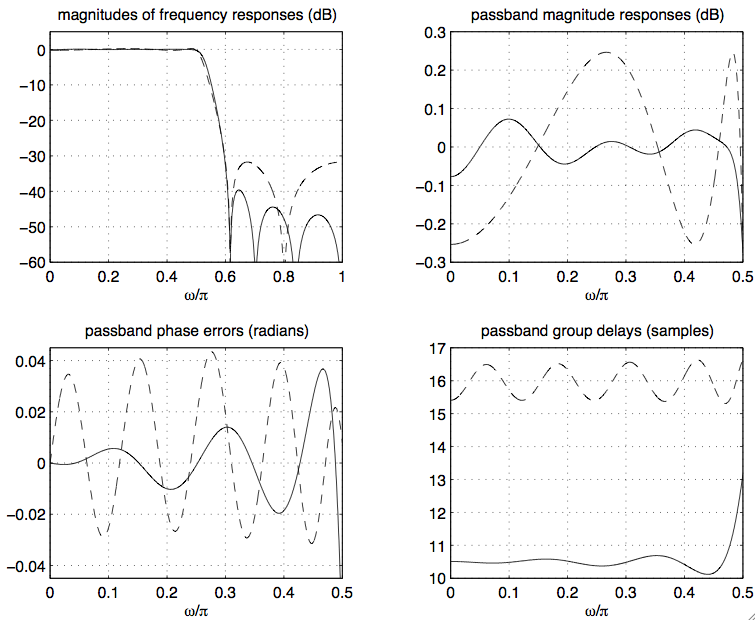 The design specifications were taken from this paper by Deczky, where the phase of a $4^{th}$ order Cauer low pass filter is equalized by an $8^{th}$ order allpass filter, resulting in a total filter order of $12$. Deczky's design is shown by the dashed curves in the figure. The alternative design (solid curves) is a direct design of an IIR filter with the desired low pass characteristic and an approximately linear phase in the pass band using the algorithm proposed in the thesis cited above. The order of the numerator polynomial was $12$, just as the cascade in Deczky's design, but the denominator degree was only $6$. Despite this lower order and lower complexity, that filter shows better magnitude, phase, and group delay approximations over a large part of the pass band. Only close to the band edge do the phase and group delay approximation errors become larger. This is a consequence of the least squares design criterion. Note that the total pass band group delay of the filter designed by direct complex approximation is smaller than for the cascade design.

Not the answer you're looking for? Browse other questions tagged digital-filters or ask your own question.

0
How to predict the cramped frequency of a digital filter based on an analogue frequency?
2
Lowpass filter impulse response in frequency domain
3
Why is there little emphasis on phase distortion?
2
How to determine if an IIR filter is causal or non-causal?
0
Calculating the cutoff frequency of a highpass digital filter
2
Applications for the Maximum Phase Filter
0
Coefficient Scaling of IIR filter to obtain unity gain response