I am currently trying to understand mathematically the amplitude shift keying modulation technique. My question is, say I wanted to compute the Fourier series of a basic pulse train, it is quite simple since it is periodic. But in digital transmission (Unipolar) the signal is random, how does one compute the spectrum of this transmission. I hope my question makes sense.

Here is a snapshot of some notes I found online. The data signal is a random signal of 1's and 0's. How can anybody interpret the spectrum of it? Thanks. 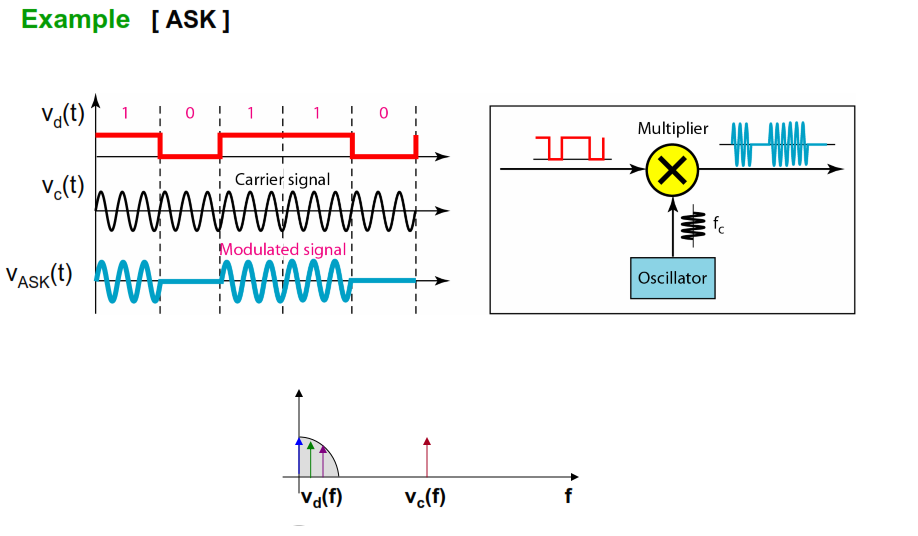 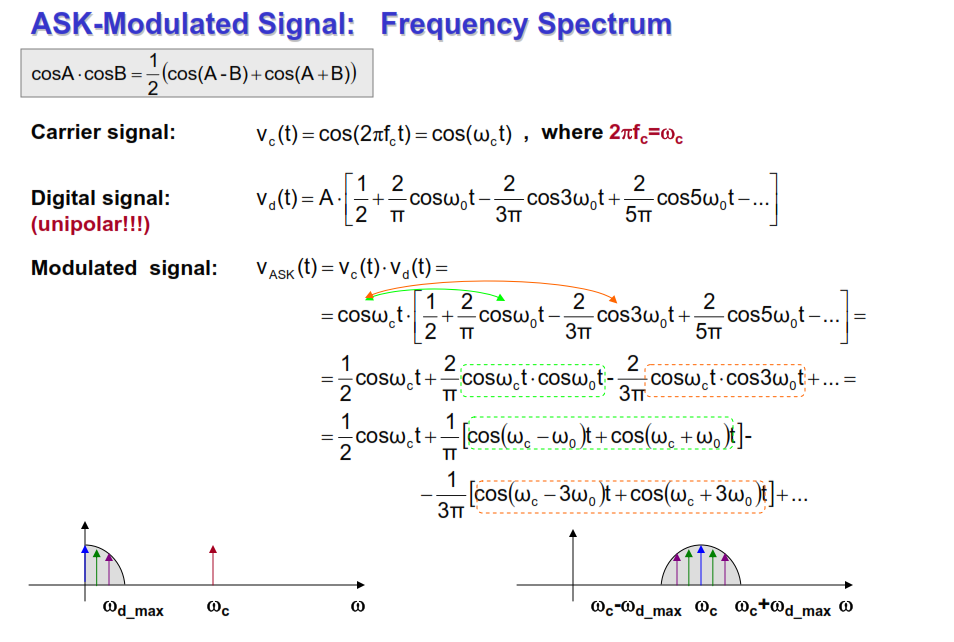 The spectrum of a pulse train with a defined pulse with T that is indeed random in duration of zeros and ones would have the magnitude envelope of a Sinc function (PSD with envelope Sinc^2) with first null at 1/T. Since the data is random the spectrum will be continuous. Similar to this is something like GPS where we transmit Pseudo-random patterns, but the pattern repeats (assuming no data modulation which again adds randomness). In this case, whenever there is a repeating pattern, you would see discrete tones at the repetition rate and every harmonic of the repetition rate, and the envelope would still be the Sinc function as described with nulls at 1/T. (Thus with doing forensics on such a spectrum you can discern the length and repetition rate of the sequence based on the spacing of the spectral lines, and the number of "chips" in the sequence based on the location of the null, etc.).

Finally multiplying by the carrier just moves this spectrum (which is best viewed in my opinion as a positive and negative spectrum even at baseband, as then you can translate it from there to any frequency with no changes to its features). The fact that this is on-off keying means that it will have a DC component, so the carrier will come through very strong at the RF output. In comparsion if the signal was bipodal (which would then be BPSK modulation), with an equi-probable stream of 1's and 0's you would have no DC at baseband (avg =0) leading to supressed carrier at RF. The carrier power in the former case is wasted (no information added) so is less efficient in terms of BER vs power than the latter case.

The reason for this is the base square pulse has a FT that is the Sinc function, and your random data is represented as a stream of impulses (with random positive and negative sign) that is convolved in time with your pulse (effectively a zero order hold). If the impulses are random in a pattern that never repeats, the spectrum of that pulse stream will be a continuous flat spectrum: white noise. Therefore in frequency you multiply white noise with the Sinc to get the spectrum before being upconverted. The mixer translates this spectrum to the carrier.

Your picture just shows the main lobe, but if your pulse is indeed rectangular, you will have all the sidelobes of the Sinc function out to the effective BW (based on the rise/ fall time of your pulse).

I hope this clears it up for you!

Not the answer you're looking for? Browse other questions tagged fourier-transform frequency-spectrum modulation fourier-series or ask your own question.

15
A good mathematical explanation of Gibbs phenomenon
3
Feature Selection by Filtering
1
Implementation of the constant Q transform + property questions
7
Is spectral leakage due to windowing 'different' for the DTFT and DFT?
12
Transmit data through sound between 2 computers (very close distance)
4
Power Spectral Density of Digital Modulations
3
Difference between Fourier-Transform and FFT of rectangular pulse