Despite the signal being real, as is seen in the last line of the first picture:

, the exemplary spectrum of the signal shows neither an even real nor an odd imaginary part: 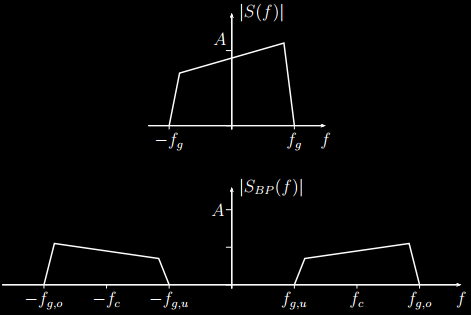 But from my theorems I know that for every real x(t) the real part of the Fourier-Transform is even and the imaginary part of it is odd?

You are right in that the Fourier Transform (FT) of every real $x(t)$ has even real part and odd imaginary part. However, your figures only show the absolute value of the bandpass spectrum, so you cant see real- and imaginary part separately. Note that the above figure (showing $|S(f)|$ is the baseband signal, which is indeed non-even and hence complex valued. But, after upconversion, the signal becomes real and if you write a small script that does the calculation of the upconversion, you will see, the FT $S_{BP}(f)$ of the bandpass signal $s_{BP}(t)$ will have mentioned properties. I have once written a walkthrough article of up-down-conversion here which might also help in understanding this process.