Taking into account that Stationary Wavelet Transform (Algorithme à trous) is not an orthogonal transform do we need intermediate approximation coefficients for signal decomposition?

For example, in maximally decimated DWT we have the following decomposition tree: 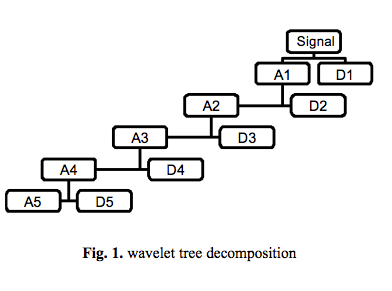 And according to the conclusions from the MRA (multi resolution analysis) to fully represent (and reconstruct) the signal it is suffice to have only the last approximation subband plus all of the difference subbands.

Does this also hold true for SWT?

If I understand well, no, you don't need intermediate approximation coefficients, as long as you have (not) sampled properly. So yes, having the last approximation subband plus all of the difference subbands suffices.

Moreover, there are several inverses, since the transform is redundant, which can reveal better than the obvious one. Note that a stationary wavelet packet transformation would require intermediate approximation coefficients.

If I may, orthogonality is not the question here: you could perform SWT with non-orthogonal wavelet filters. With insight from your other question Additive white gaussian noise and undecimated DWT, I propose to recall that:

In the literature, one sometimes finds "orthogonal" as a proxy for "square" & orthogonal, which is correct, but "square" being more important in that case, as compared to redundant schemes.