Video compression - why not just sending the changed parts?

I easily understood what optical flow is, the thing I can't understand is why a simple video compression could not just send the parts of a frame marked with a "motion vector" (as you would send only the parts that have moved to or from a position from frame to frame).

I mean: MPEG is way more complex than that, what's the catch with sending parts of a frame that have changed to "stick them over it to get the next one"? Is this a technical flaw (i.e. too much data to be transferred) or is there something else involved that invalidates this simple reasoning?

You could do that, in theory, if you knew "what are the parts" (or objects) frame-to-frame in a video. But:

MPEG 4, at least, allows to manipulate objects instead of pixels, see MPEG-4 Natural Video Coding - An overview. If objects and backgrounds are already decoupled, like filmed with a green screen: 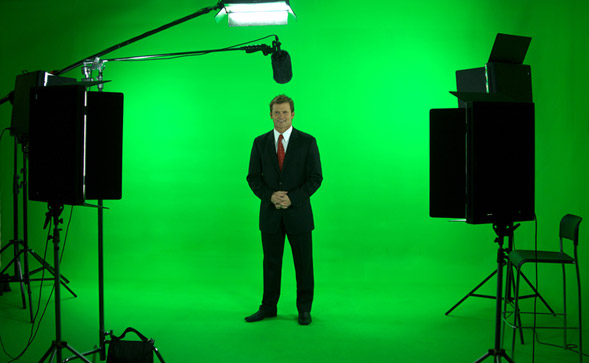 then the object contents can be processed separately. Otherwise, what is more important is that, visually, the representation is accurate enough. Thus, a block from some object in a frame can be cast to another block of a different object in a different frame, as long as the result is satisfactory. Thus, in a lot of cases, the block matching is sufficient, and more importantly, relatively fast to compute.

Video codecs tries to find apparent movement (akin to optical flow) first. Bits have to be allocated to describe that motion. Then the residual is coded using a lossy transform/quantazation that tends to leave mainly a few coefficients close to "DC", and run-length coding or similar of those.

9
Extremely computationally intensive image/video compression schemes which offer better compression than industry standard JPEG/H.264
3
Video Compression - When would an average of the previous and next I or P frame be useful
6
What happens when we Fast Forward the Video
4
Extract not blurry images from video
1
Noise modeling and reduction in Video when we have just noisy video
3
Why are vector quantizers not used in video codecs?
1
Extract the count of particular macro block types(I, P and S) from the frames in the video
6
Can deep learning be applied to video compression?
2
Is it possible to calculate/estimate the storage space a certain duration of .mp4 video files will take up?