Help in understanding from book expression of variance of an estimator : PRBS vs real valued input

The question is based on Book : Fundamentals of Statistical Signal Processing by Steven Kay, Chapter 4 : Eq(4.21). The expression for the variance of the estimated coefficients when the input is PRN as

EDIT of the update based on the answer and offline discussions

A PRN sequence is a Pseudo-Random Noise sequence, often generated by using an Linear Feedback Shift Register (LFSR) with the feedback taps done by using a primitive irreducible polynomial in GF{2}, which is the Golois Field of 2 elements. When a primitive and irreducible polynomial in GF{2} is used, the LFSR will produce a "maximum length sequence", meaning the pattern at its output will be the longest possible for the number of registers in the LFSR. An example generated from the polynomial $1+x^3+x^4$ is shown in the picture below. This polynomial is primitive and irreducible in GF{2}, and in this case we will use the symbols $-1$ and $+1$ as the two elements in the field), and therefore this LFSR as configured will produce a maximum length sequence; the state of the generator, being the values after each cycle at the output of each register in the generator, will cycle through every possible combination pseudo-randomly before repeating, except for the all zero state. (So in the picture shown the choices are $0001$, $0010$, $0011$, $0100$, $\ldots$, $1111$ in pseudo-random order, so the pattern of the sequence at the output will have $15$ values before repeating) Generally the maximum length is $x^N-1$ where $N$ is the order of the polynomial, the $-1$ is because the all-zero state is not allowed).

For clarity we will refer to each output of the LFSR as a "chip", and the complete sequence is referred to as a "symbol". 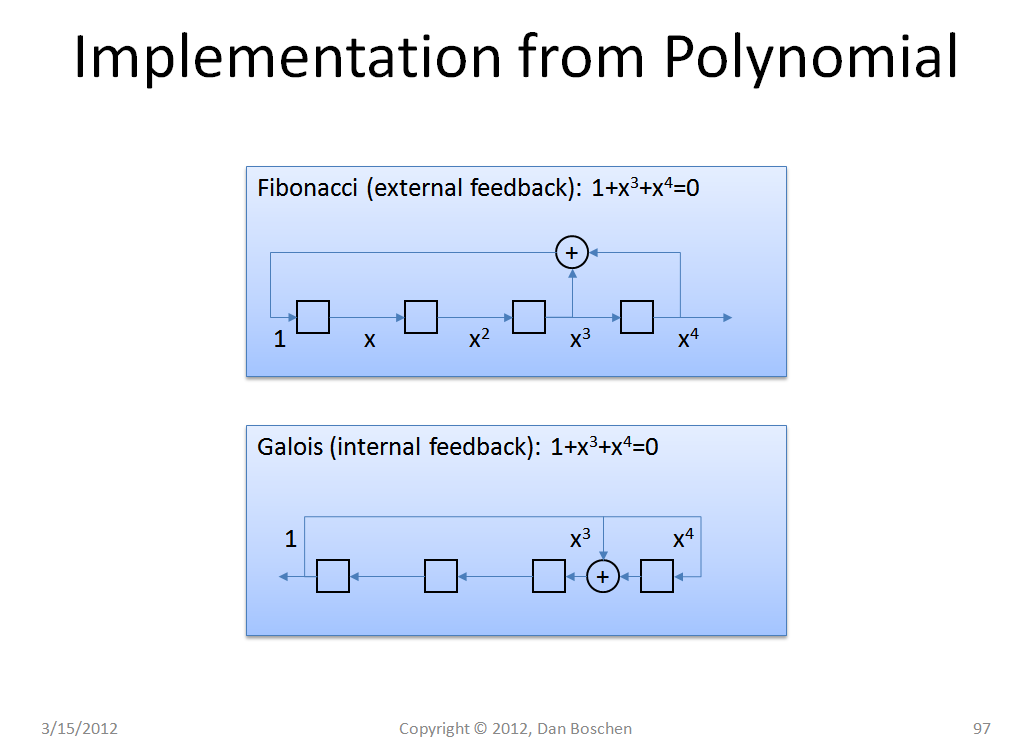 When you correlate to a matched PRN sequence + noise (the input), you multiply the input by each coefficient in the sequence and sum the result (correlation = multiply + accumulate). If you are aligned to the code, the multiplication will cause the $-1$'s in the input to be $+1$'s, and the $+1$'s in the input to be $+1$'s, essentially converting the pseudo-random pattern to be all $1$'s. This output of all ones is then accumulated to achieve the correlator output. (Below shows the multiplication that would then be fed to an accumulator after each result).

The accumulation on the signal component (which is all $1$'s when aligned) will go up in magnitude by $N$ given $N$ samples in the sequence (if we assume one sample per chip).

If we normalize the signal level to be the same at input and output, the noise standard deviation will have changed by a factor of $1/\sqrt{N}$, and it's variance by $1/N$, matching your equation.

Stating this mathematically, consider our samples at the output of the multiplier as $$X_i\quad\text{for}\quad i=1, 2, \ldots, N$$

The multiplication by $+1/-1$ does not change the distribution of the noise on the input samples (they will still be independent and identically distributed, IID), with the same variance as the input given as $$\textrm{Var}(X_i) = \sigma^2$$

Multiplying by $\pm 1$ with a synchronized PRN causes the mean to be 1 as previously described, $$E(X_i)=1$$

Where $X_i$ is the product of the input waveform with the PRN.

This results in the expression for the mean and variance of $Y$ as follows:

Not the answer you're looking for? Browse other questions tagged estimation self-study covariance terminology estimators or ask your own question.

5
Compensating Loudspeaker frequency response in an audio signal
0
Clarification on how to add the PRN generator?

0
Confusion related to PN sequence : Terminology and application in statistical signal processing
0
Need help in understanding minimum variance estimator and CRLB concept using an example
1
Confusion regarding pdf of circularly symmetric complex gaussian rv
0
Is there a rule of thumb for selecting the variance of the input?
1
Notations to Use in Formulating of Maximum Likelihood Estimation
8
Estimators for improved spectral subtraction of noise
1
Solving a Linear Mean Square Estimation the Easy Way
0
Probability of achievable data rate greater than target data rate $\Pr\left[\frac{1}{2}\log_2\left(1+\text{SINR}\right)>R_{\text{target}}\right]$?