Mathematical question that comes out of using bilinear transform

So this is related to the Cookbook and I tried solving it maybe two decades ago, gave up, and was reminded of the unsolved problem. But it's pretty damn straight forward, but I still got slogged down in the muck.

This is a simple Bandpass filter (BPF) with resonant frequency $\Omega_0$ and resonance $Q$:

At the resonant frequency

and the upper and lower bandedges are defined so that

So if analog angular frequency is

then it's mapped to the digital angular frequency as

Now, the upper and lower bandedges in the analog world are

and in digital frequency domain are

Then the actual difference, in log frequency of the bandeges (which is the actual bandwidth in the digital filter) is:

This has a functional form of

What I want to do is invert $f(x)$ (but I know I can't do it exactly with a nice closed form). I have already done a first-order approximation and i want to bump it up to a third-order approximation. And this has become a sorta copulating female canine, even though it should be straight forward.

Now this has something to do with the Lagrange Inversion Formula and I only want to take it to one more term than I have.

We know from above that $f(x)$ is an odd-symmetry function:

This means $f(0)=0$ and all even-order terms of the Maclaurin series will be zero:

The inverse function is also odd symmetry, goes through zero, and can be expressed as a Maclaurin series

Now, I am able to calculate the derivative of $f(x)$ and evaluate it at zero and i get

But I am having a bitch of a time getting $a_3$ and therefore $b_3$. Can someone do this? I'd even settle for a solid expression for the third derivative of $f(x)$ evaluated at $x=0$.

To complement my part to this question: Here is a somewhat shorted answer based upon a manual expansion of the odd function $f(x)$ \begin{align*} f(x)&=\ln\left(\arctan\left(\alpha e^x\right)\right)-\ln\left(\arctan\left(\alpha e^{-x}\right)\right)\\ &=f_1x+f_3x^3+O\left(x^5\right)\tag{1} \end{align*} into a series up to the third order. Some more details can be found at mathSE.

We can also double check if this matches up with Markus's answer here.

His coefficient of $x^3$ comes out to be

If we multiply that by 6 and rearrange some factors we get:

The problem as posed in the question appears to have no closed-form solution. As mentioned in the question and shown in other answers, the result can be developed into a series, which can be accomplished by any symbolic math tool such as Mathematica. However, the terms become quite complicated and ugly, and it is unclear how good the approximation is when we include terms up to third order. Since we can't get an exact formula, it might be better to compute the solution numerically, which, unlike with the approximation, will give an (almost) exact result.

However, this is not what my answer is about. I suggest a different route which gives an exact solution by changing the problem formulation. After thinking about it for a while it turns out that it is the specification of the center frequency $\omega_0$ and the specification of the bandwidth as a ratio (or, equivalently, in octaves) which causes the mathematical intractability. There are two ways out of the dilemma:

In both cases, a simple analytical solution is possible. Since it is desirable to prescribe the bandwidth of the discrete-time filter as a ratio (or, equivalently, in octaves), I'll describe the second approach.

with $\Omega_2>\Omega_1$, where $H(s)$ is the transfer function of a second-order band pass filter:

corresponding to the following relationship between continuous-time and discrete-time frequencies:

The bandwidth of the discrete-time filter can be specified in octaves (or, generally, as a ratio), and the parameters of the analog prototype filter can be computed exactly, such that the specified bandwidth is achieved. Instead of the center frequency $\omega_0$, we specify the band edges $\omega_1$ and $\omega_2$. The center frequency defined by $|H_d(e^{j\omega_0})|=1$ is an outcome of the design.

The necessary steps are as follows:

Note that with the more common approach where $\omega_0$ and $\Delta\omega=\omega_2-\omega_1$ are specified, the actual band edges $\omega_1$ and $\omega_2$ are an outcome of the design process. In the proposed solution, the band edges can be specified and $\omega_0$ is an outcome of the design process. The advantage of the latter approach is that the bandwidth can be specified in octaves and the solution is exact, i.e., the resulting filter has exactly the specified bandwidth in octaves.

which achieves exactly a bandwidth of 1 octave, and the specified band edges, as shown in the figure below: 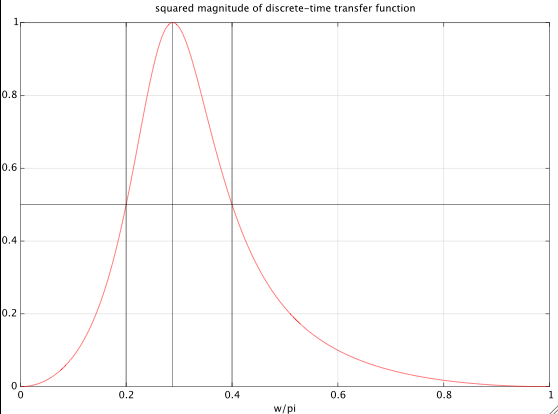 Numerical solution of the original problem:

From the comments I understand that it is important to be able to exactly specify the center frequency $\omega_0$ for which $|H_d(e^{j\omega_0})|=1$ is satisfied. As mentioned before it is not possible to get an exact closed-form solution, and a series development produces quite unwieldy expressions.

For the sake of clarity I would like to summarize the possible options with their advantages and disadvantages:

When $\omega_0$ is specified we use a form of the bilinear transform with a normalization constant that is different from the one used in $(3)$ and $(4)$:

We define $\Omega_0=1$. Denote the specified ratio of band edges of the discrete-time filter as

For a given value of $r$ this equation can be solved for $\Omega_1$ with a few Newton iterations. For this we need the derivative of $f(\Omega_1)$:

With $\Omega_0=1$, we know that $\Omega_1$ must be in the interval $(0,1)$. Even though it's possible to come up with smarter initial solutions, it turns out that the initial guess $\Omega_1^{(0)}=0.1$ works well for most specs, and will result in very accurate solutions after only $4$ iterations of Newton's method: 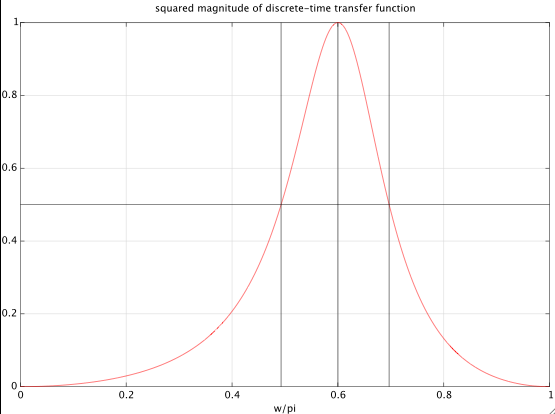 The filter was calculated with this Matlab/Octave script:

I add another example to show that this method can also deal with specifications for which most approximations will give non-sensical results. This is often the case when the desired bandwidth and the resonant frequency are both large. Let's design a filter with $\omega_0=0.95\pi$ and $bw=4$ octaves. Four iterations of Newton's method with an initial guess $\Omega_1^{(0)}=0.1$ result in a final value of $\Omega_1=0.00775$, i.e., in a bandwidth of the analog prototype of $\log_2(\Omega_2/\Omega_1)=\log_2(1/\Omega_1^2)\approx 14$ octaves. The corresponding discrete-time filter has the following coefficients and its frequency response is shown in the plot below: 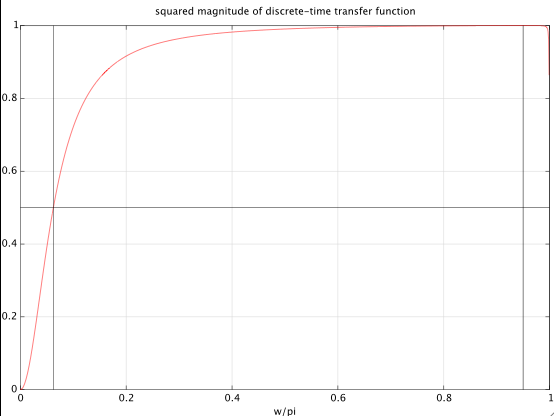 okay, i promised to put up bounty and i will keep my promise. but i have to confess that i might renege a little bit on being satisfied with just the third derivative of $f(x)$. what i really want are the two coefficients for $g(y)$.

so i didn't realize that there was this Wolfram language as an alternative to mathematica or Derive and i didn't realize it could so easily compute the third derivative and simplify the expression.

and this Markus guy at the math SE posted this answer (which i thought was gonna have to be the amount of grunge i thought would be needed).

so i put together the third-order approximation to the inverse:

i have three convenient trig identities:

this ain't so bad. fits on a single line. if someone sees an error or a good way to simplify further, please lemme know.

with the power series approximation from the comment above,

so here are some quantitative results. i plotted spec'd bandwidth $bw$ for the digital filter on the x-axis and the resulting digital bandwidth on the y-axis. there are five plots from green to red representing the resonant frequency $\omega_0$ normalized by Nyquist:

so the resonant frequency goes from nearly DC to nearly Nyquist.

here is no compensation (or pre-warping) at all for bandwidth: 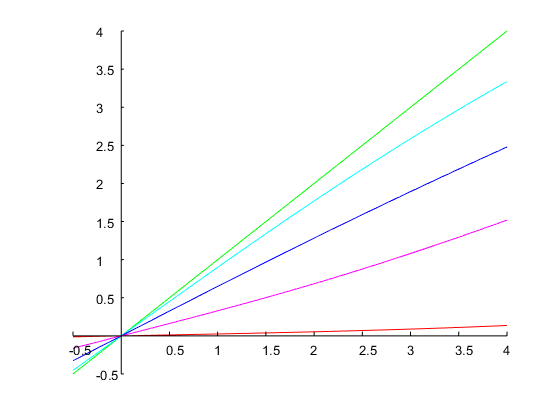 here is the simple first-order compensation that the Cookbook has done all along: 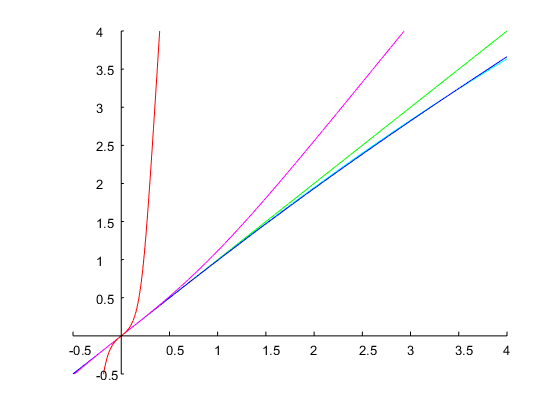 here is the third-order compensation that we just solved here: 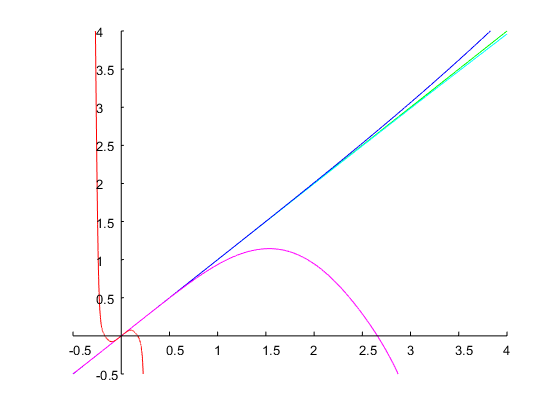 what we want is for all of the lines to lie directly on the main diagonal. 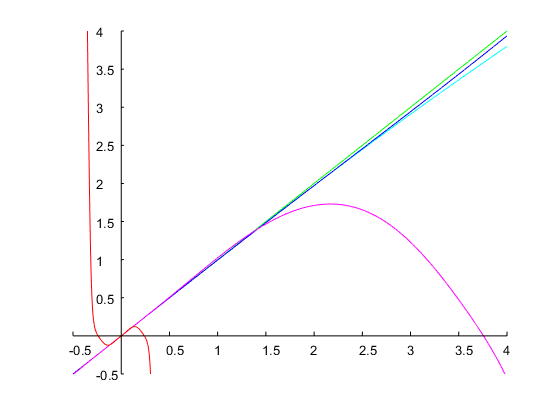 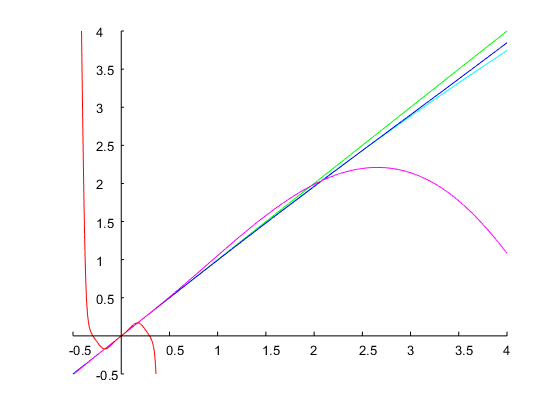 and this is reducing the 3rd-order term to 25%: 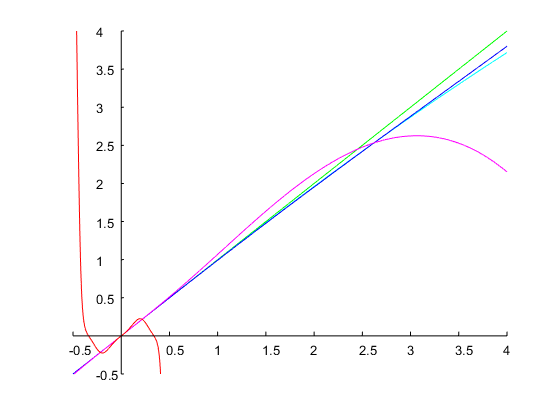 since the object of an inverse function is to undo the specified function, the point of this whole thing is to get the curves of the composite function to lie as close to the main diagonal as possible. it's not too bad for up to 75% Nyquist for resonant frequency $\omega_0$ and 3 octaves bandwidth $bw$. but not so much better to really make it worth it in the "coefficient cooking" code that is executed whenever the user turns a knob or slides a slider.

Not the answer you're looking for? Browse other questions tagged audio bandwidth math bilinear-transform or ask your own question.

4
Hilbert transform filter for audio applications: Using IIR half-band parallel all pass structure
3
Deriviation of the "Twiddle Sum" property
0
Analog butterworth to digital - bilinear transform
7
Does it make sense to have complex numbers representing real-world audio signals?
0
DSP filter. Is prewarping performed when discretizing using Forward/Backward?
0
How to design digital filter from transfer function
10
First order low pass filter
3
Is it possible to compute the PSD of s(t)^2 given the PSD of s(t)?
0
How do you prove that the bandwidth of a signal is inversely proportional to the length of the signal?
0
How to solve this degree $2N$ polynomial equation of filter's cut-off frequency?