Is there a rule of thumb for calculating the approximate filter order of a FIR/IIR based on passband vs sample rate? I seem to remember reading about it once in Undergrad. I'd think you could make a rough estimate like scaler * passband/stopband.

I have been working on implementing different FIR/IIR filters and would like some rough formula that says if one variable is changed, this is approximately how many more taps you would need to get similar performance.

My favorite "Rule of thumb" for the order of a low-pass FIR filter is the "fred harris rule of thumb":

For example if you have a transition band of 100 Hz in a system sampled at 1 kHz, and your rejection requirement is 50 dB in the stop band then the order can be approximated by:

Note another more detailed formula that takes into account passband ripple is Kaiser's formula thanks to James Kaiser from Bell Labs, which I included in my graphic below.

For most applications I have done, the Fred Harris approach has been just fine, as given a certain rejection, the resulting filters using traditional filter design algorithms such as Parks-McClellan and Remez have exceeded my passband ripple requirements upon meeting the rejection requirement. (What I usually do is estimate the order, design the filter with that order, inspect the result and increase or decrease order from there to fine tune). The results from the estimates are just that: estimates, and can vary widely depending on overall design parameters and not to be assumed to be an exact solution. 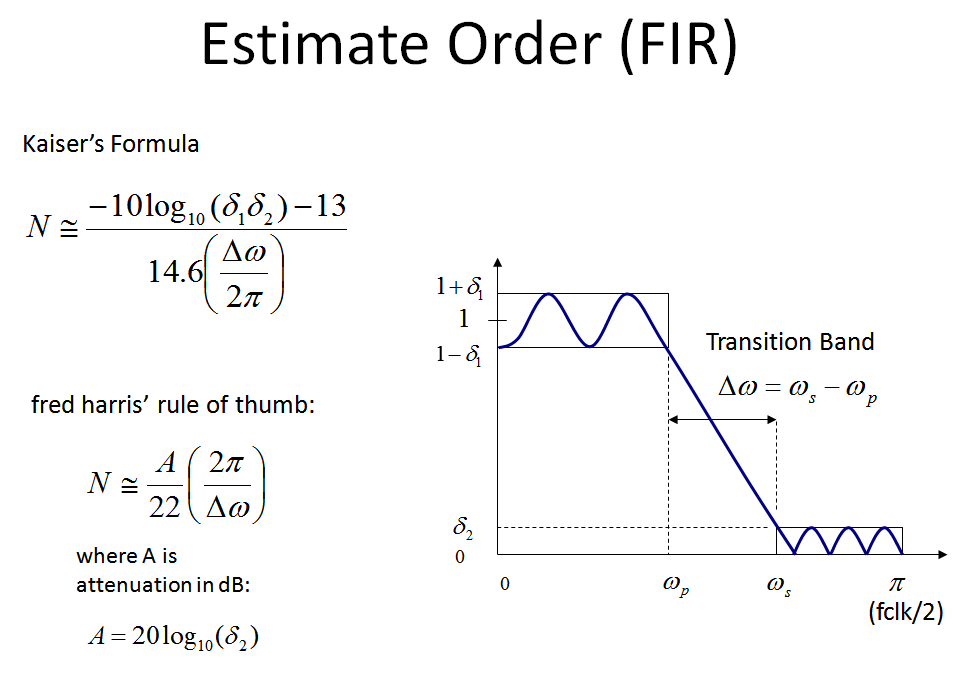 For those familiar with filter design using window approaches, review of the boxcar or rectangular window (which is simple truncation) reveals why it takes $f_s/\Delta f$ taps (which is the same as $2\pi/\Delta\omega$ if the units for normalized frequency are radians/sample as is often done) to complete the transition band. See the images below that help explain this.

The top image below shows the expected Sinc in frequency for a rectangular window in time, in this case as a non-causal rectangular pulse centered on $t=0$. This is then repeated in discrete forms as a causal waveform starting at $t=0$, both with the Discrete Time Fourier Transform (DTFT) and Discrete Fourier Transform (DFT) where the difference is the samples in time extend to $\pm \infty$ for the DTFT resulting in a continuous waveform in the frequency domain. In both cases the result is an aliased Sinc function that is periodic over the interval $f= [0,f_s)$, with the key point that for $N$ samples in time of the rectangular function, the frequency response will have its first null at $f = 1/N$ (Where $f$ is the normalized frequency with 1 being the sampling rate). 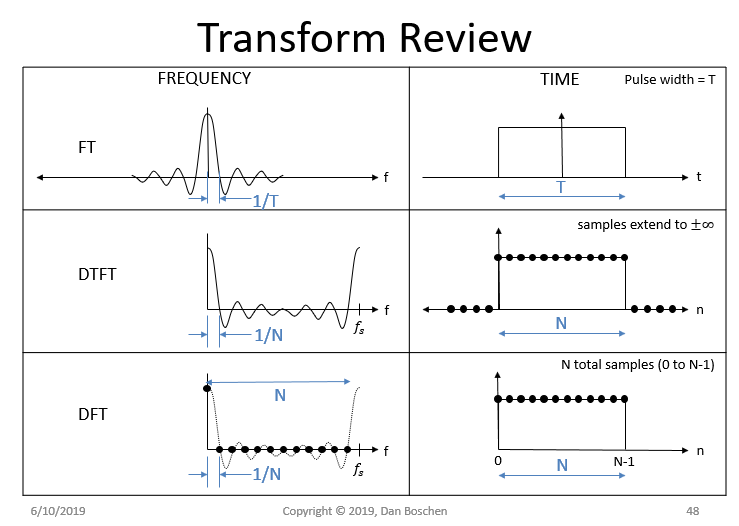 This next image below shows the rectangular window approach to filter design (which I would never recommend but is informative). The first plot in the upper left hand corner shows the target frequency response for our filter as an ideal "brick wall" response. Please don't confuse that with the "boxcar window" (or "rectangular window") which is also a rectangular shape-- the window is in the time domain!

In order to realize such a filter, we would use the impulse response of the desired frequency response as the coefficients in our FIR filter (the coefficients of the filter are the impulse response---put an impulse in and out come all the coefficients!). The impulse response for a rectangular frequency (brickwall) response is the inverse FT which is a Sinc function, in the time domain, shown in the lower left hand corner as the "Required Impulse Response". A Sinc function extends to plus and minus infinity, so to actually realize such a filter we would need an infinitely long filter and it would have infinitely long delay. Obviously we can't do that, so we truncate the coefficients to something realizable. The longer the filter, the closer we approximate the ideal brickwall response, but also the longer the delay will be (and the more resources we would need in terms of the filter construction; more taps). 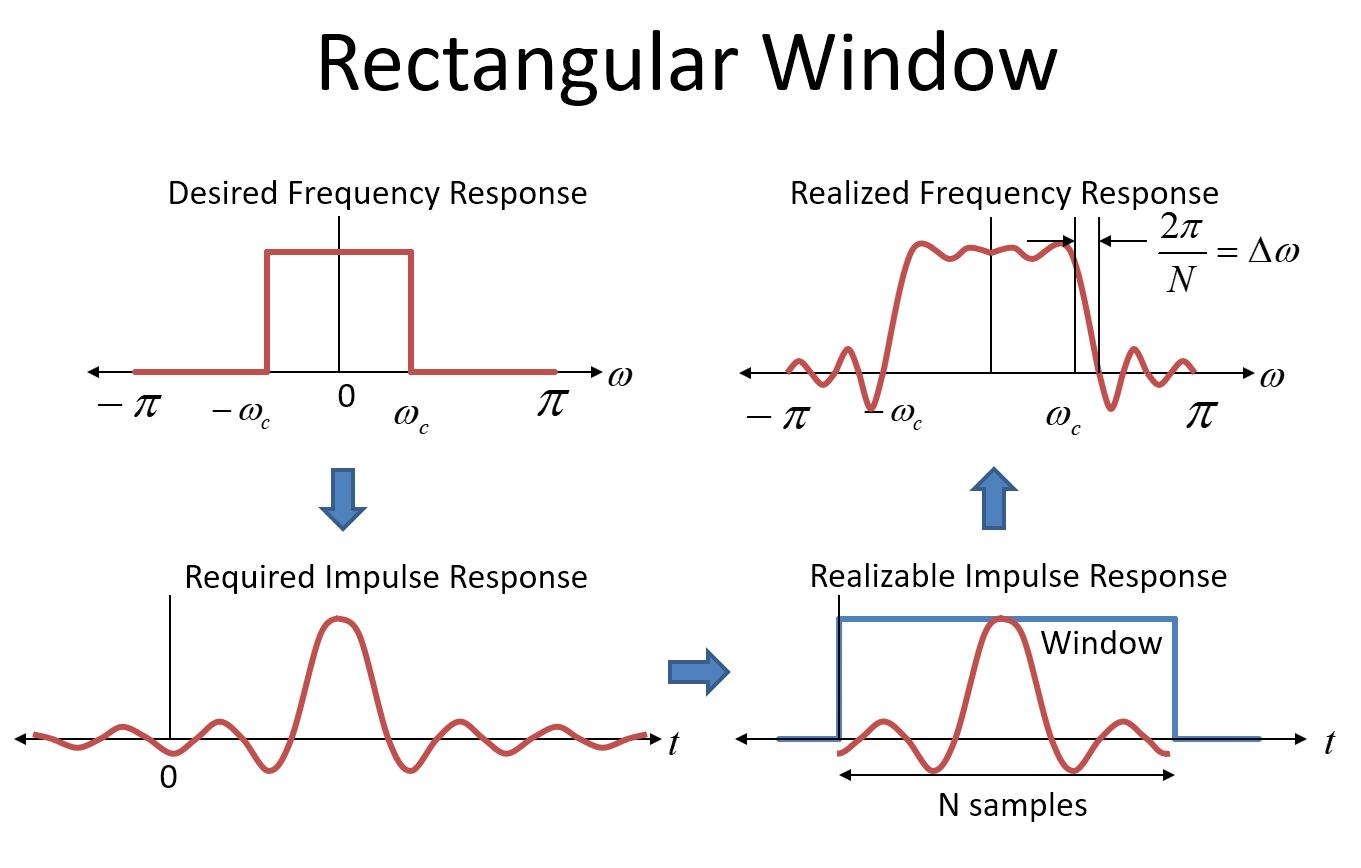 A key take-away for Sinc functions in general is the first null is $1/T$ where $T$ is the duration of the rectangular function. For a sampled system, the first null would be at $2\pi/N$ where $N$ represents the number of samples for the duration of the rectangular function. In the images a normalized radian frequency is used for the frequency axis- (if that confuses you just know the $2 \pi$ is the radian frequency for the sampling rate). So in the process of the convolution, the sharp brickwall transition spreads out and in this case goes to 0 (our $\Delta \omega$) over a frequency of $2\pi/N$! So here $$N = 2\pi/\Delta \omega$$ and of course the filter is poor with sidelobes etc. Note this: This transition from the Sinc function is the sharpest available for a given number of taps; it has the best resolution in frequency but the poorest dynamic range (rejection). Other window typologies (Blackman, Blackman-harris, Kaiser (my favorite), etc) will significantly improve dynamic range but always at the expense of the transition. 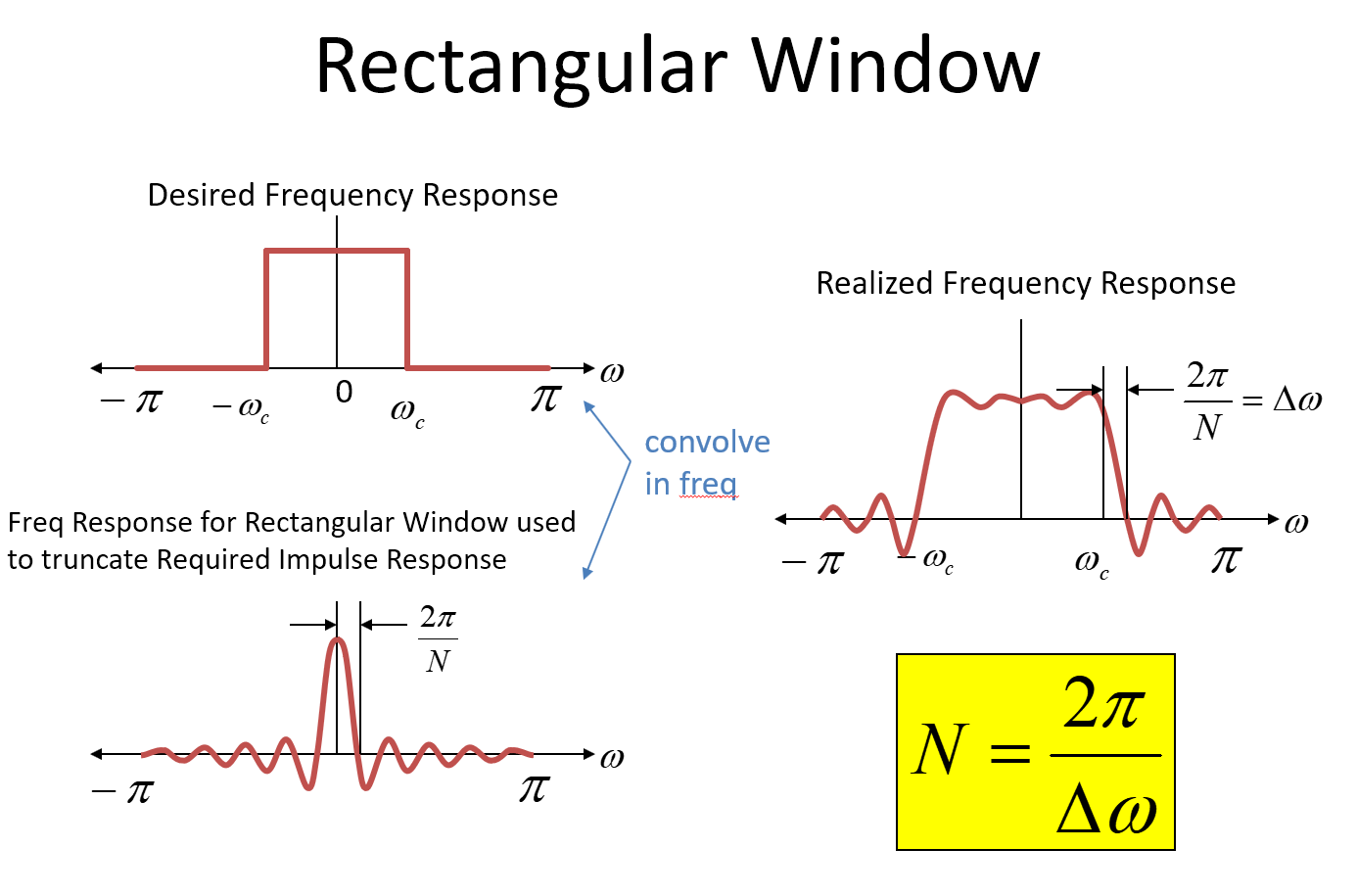 So from the above, we see the origin of the $2\pi/\Delta\omega$ that is used in the approximation formulas, and we also see why there is an additional multiplication factor increasing the number of taps above this for typical filter designs; the rectangular window would give us the best transition possible with $N$ taps where $N = 2\pi/\Delta\omega$ but have very poor rejection. More taps are used to smooth the time transition further beyond the sharp transition of the rectangular window, providing greater rejection at the expense of transition bandwidth.

The length of a FIR filter or order of an IIR filter is very roughly inversely proportional to the ratio of the transition-band's width (narrowest one, if many) to the sample rate, other things being somewhat equivalent, except for very short or very low order filters.

1
Digital Filter Design Accuracy
3
"fred harris rule of thumb":
6
What is the relation of the transition band's width and the filter order for the FIR windowing method
2
Does Higher Sampling Rate Increase SNR?
1
How to determined the cutoff frequency of a IIR or FIR
0
Designing of passband and stopband frequencies

17
Are there any standard implementation forms for tunable Butterworth filters?
3
How to filter and downsample before FFT?
2
FIR Filter design by non-equal samples
3
"fred harris rule of thumb":
3
How to use a FIR on a signal with a drifting central frequency?
2
Designing FIR filter for real-time decimation of audio on embedded system
10
High Dynamic Range FIR Filters
4
Decimation filters: IIR vs. FIR
5
Filter design with constrained impulse response