I would like to insert a filter with an resonant filter characteristic of a realistic mechanic oscillator. I need to apply it in the time domain, e.g. with a function such as filter or filtfilt. Such, I need filter coefficients fitting my problem. I have found the iirpeak function in MATLAB and implemented it.

The problem is that it damps the signal in the stopband and has unity at resonance. The second problem can be solved by adding a gain factor to all b coefficients. The other problem I was not able to solve, because a mechanic oscillator is described mainly by its $Q$ factor and resonance frequency, and that it does not alter the signal far away from the resonance.

Here is a picture of the differences: 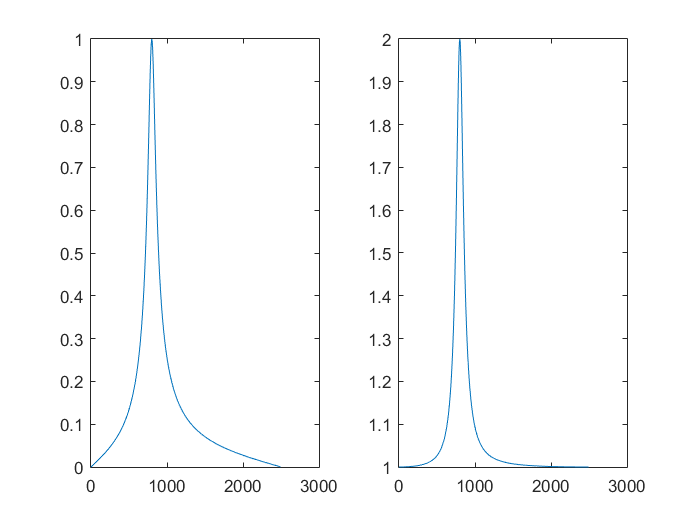 So how can this change be avoided? One approach would be to adapt the bandwidth in the initial iirpeak function.

One can get the same bandwidth, if, in the course of coefficients creation, one multiplies the bandwidth (bw) with sqrt(2), for whatever reason.

EDIT2: The edit from Maximilian correctly suggested that the change in the form of the filter is due to the phase. This will be neglected in the following. Following the comment from Matt L. implemented a peakingEQ filter (see Audio-EQ-Cookbook, link in comment from Matt L.) and compared. The bandwidth function just returns the 3dB bandwidth. 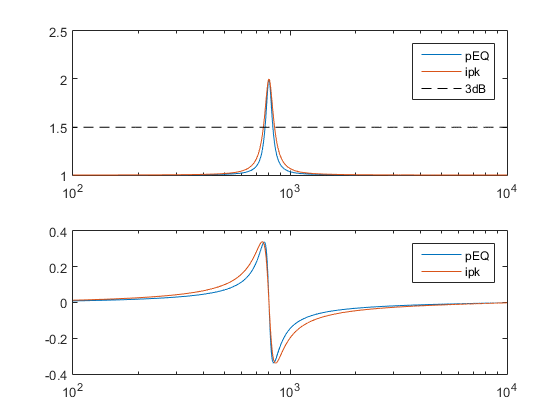 With the hack from Maximilian they look quite alike except for a difference in bandwidth, which can be solved by adding a term to the alpha_pEQ in the script (see comment in source code). This might be due to a power - amplitude confusion at this point, but is neglected at this point.

The second solution with the peaking EQ is a little handier, since it includes a direct gain control.

You have designed a bandpass filter, i.e. it does not allow any frequency far way from the resonance to pass. As far as I understand, you want a filter, that does not change the signal in the stopband, but has a resonance at some frequency.

where $b(z)$ and $a(z)$ are the polynomials of the bandpass filter. So, all you need to do is change your filter coefficients according to:

Here's the program output. The blue curve is the original filter, the green curve is the new filter. You can modify the peak strength by multiplying the b-component of the numerator of the filter, to get different peak heights. 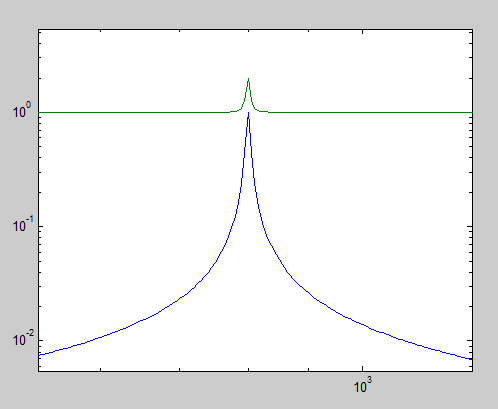 edit: However, as mentioned in the comments, the magnitude response of the modified filter changes slightly compared to the original filter. This is best shown by a filter with a wider passband: 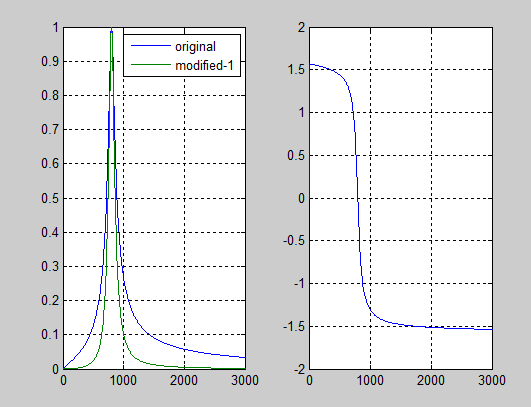 however, this does not mean that

since $H(f)$ is a complex value. In order to fix this, one would need to design an allpass filter that has the same / similar phase response as the original filter, and then perform the addition in the Z-Domain. However, then the equations get more complicated.

To prove this idea, consider the following:

Here, I designed the allpass filter to have phase $\pi/2$ all the time, i.e. it (roughly) matches the phase for frequencies < 800Hz. Looking at the resulting figure, you see that the filters have similar magnitude response for the lower frequencies. However, it messes up for the higher frequencies, because then the allpass and the bandpass partially cancel out, since the bandpass introduces $-\pi/2$ phase (i.e. -j). 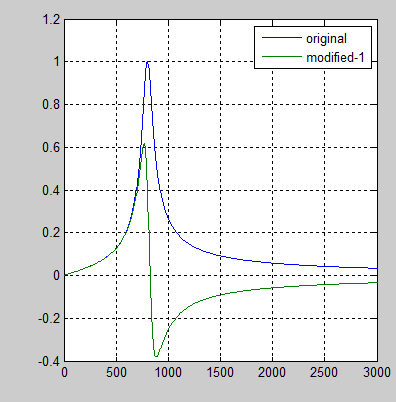 It is up to the designer, if a very accurate response is needed or if a simple "+1" is sufficient.

Not the answer you're looking for? Browse other questions tagged filter-design oscillator resonance or ask your own question.

10
Understanding a Bainter Circuit (chebychev filter)
5
Low pass fir filter with non-unity gain
0
Matlab - Creating a characteristic for Peak and Shelving filter
2
Approximate a System Frequency Response with a Filter in MATLAB
1
How to normalize predesigned IIR filter coefficients to have unity gain?
0
Band pass filter (digital resonance)
1
What is the step response curve of a second order low pass filter? And what if it is set for resonance?
0
How to detect resonance with DFT
0
FIR filter design with matlab firls() function