I am using the Quadrature Demod module in GNU Radio to decode an FSK signal, but the signal is appearing quite noisy. It has two distinct peaks centered around the advertised frequency, but they are close together and only a little above the DC spike at the center.

In my first attempt, I set the baseband frequency of my HackRF SDR to the exact center frequency of transmission with a sample rate of $2\textrm{ MHz}$. I then applied a $30\textrm{ kHz}$ low-pass filter to the signal before doing the quadrature demod on the signal. What I got out was a near quiet signal during idle periods and something resembling digital data during the transmission, but a bit on the noisy side. It was easy to set a trigger and separate out individual packets, but hard to identify the bits. A screen shot of the start of a packet is here: 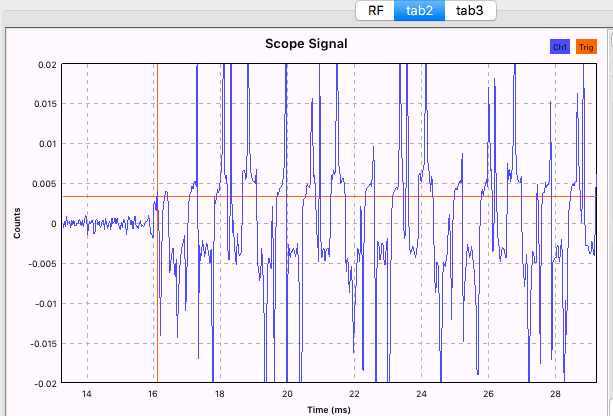 So I decided to try capturing offset from the center frequency by about $900\textrm{ kHz}$ and multiply the data by a corresponding complex signal to shift it back down to baseband. The signal now is well above the noise floor during transmission, however, my quadrature demod is capturing large amounts of noise during the idle periods. If I stop the capture at just the right moment, I can see what looks like a very clean data signal, but considerably weaker amplitude than the surrounding noise. 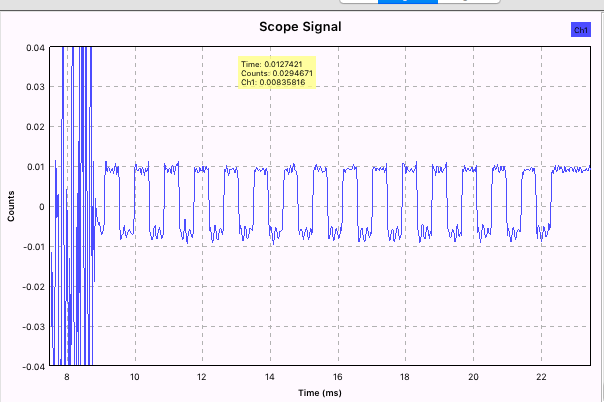 How do I get the best of both worlds so I can cleanly detect packets and decode the bits with GNU Radio?

My flow graph from the last test: 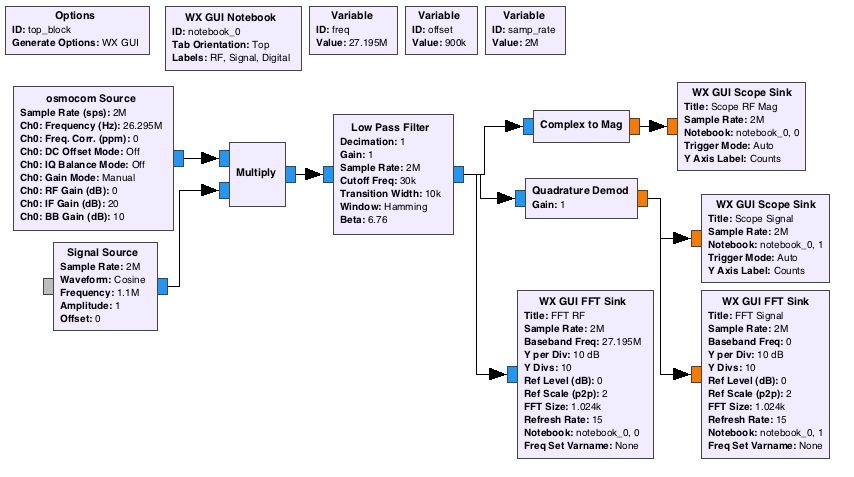 I don't 100% agree with your phrasing on this one:

however, my quadrature demod is capturing large amounts of noise during the idle periods.

Well, the quadrature demod takes successive samples and gives you the phase advance between them. If you only capture silence, or more precisely, the noise between packets, the phase of each sample should (in theory, at least) be absolutely uniformly random – and hence, your phase increases, too, should be random. Remember: the amplitude of an FM-demodulated (analog or digital) signal is not proportional to the original signal's power at the receiver (that's the beauty of FM).

There's different ways to tackle this; a simple one is in the "Power Squelch" blocks in GNU Radio (which really do what their name suggests – make sure the signal is suppressed as long as its samples are below a certain |·|² threshold). You could add one before your quadrature demod.

Another method: The mean of your "demodulated noise" should be 0 – so if you low-pass filter your demodulated signal so that you can still make out the symbols, but the phase-noise induced "jumping" gets averaged to a 0, you could just have a decider afterwards that says "ok, this is a 1 or a -1 in a packet, or this is a 0 belonging to inter-packet time".

Not the answer you're looking for? Browse other questions tagged fsk gnuradio or ask your own question.