I have many datasets which all looks roughly like this:

All the datasets have this in common. First there is an artifact around 0 with an unknown (but likely very high) intensity. Then there is some signal - in this case from ~25 to ~75. Then it's quite (between 75 and 150) and then there is another signal of an unknown characteristic.

My main goal is to analyze the signal which starts at 150, but in order to do that I want to locate a point after the first signal ends, and before the real signal start. i.e. somewhere between 75 and 150.

So far I have been using a very naive approach. Smooth/Blur the entire signal, find the first local maximum, and then locate the following local minimum. This generally works well, but once in a while you get a dataset like this one where the simple naive approach fails.

The reason it fails can be seen on the next image 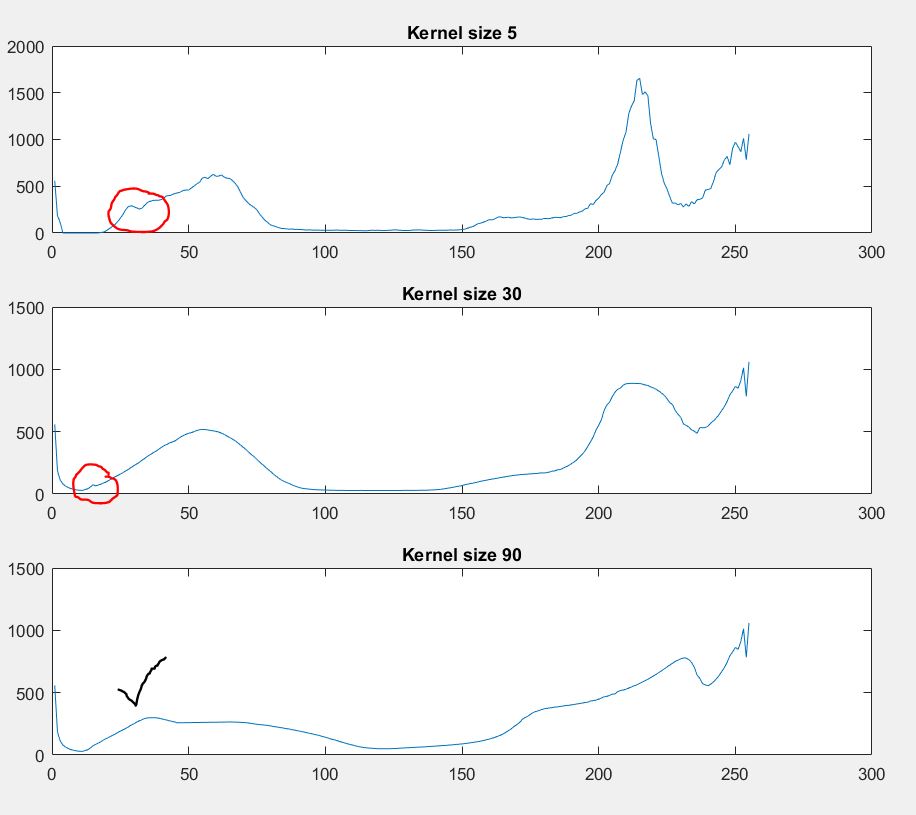 I started blurring the signal with a kernel size of 5. It worked for most signals, but some signals (like this one) would have a local minimum before the local minimum I was looking for.

I then increased the kernel size to 30, which helped a lot. However, a few datasets (like this one) still managed to have a local maximum and local minimum too much.

Increasing the kernel size to 90 fixes this particular dataset, but it doesn't feel like the correct solution. I guess it's just a question of time before I find a new dataset which have the same problem again.

What would be a better approach to locate the first signal in this case?

1
Why use a gaussian low pass filter, when we can convolve with gaussian kernel
3
Barcode localization in difficult environments
0
1D first-order derivative mask
0
Deep learning model for phone recognition - issues with dimension the model
4
Count Matches to a Kernel
0
Find common features across images