I'm new in the field of image processing and I'am trying to implement a watermarking algorithm (for medical images in DICOM format) based on this paper.

As written in the paper, this algorithm is based on the algorithm described by Ni, Shi, Ansari, and Su in the paper "Reversible data hiding" but it avoids modifying the histogram.

Despite having read and reread the paper several times, I did not understand the watermark insertion algorithm that is as follows:

I try to make a simple example: 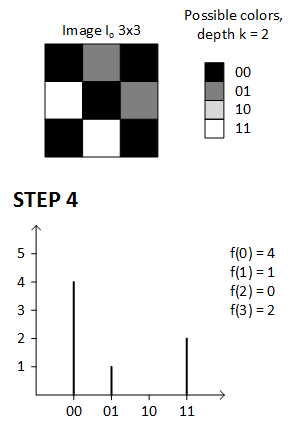 I do not know if I did right up to this point, someone could help me out? I did not find examples that could help me understand the algorithm.

Thank you very much

Browse other questions tagged image-processing histogram or ask your own question.