Why is the bandwidth doubled with AM?

Let's say I have an arbitrary signal which has the following frequency spectrum and a bandwidth of BNF:

Now I use Amplitude Modulation to transport the signal. The frequency spectrum will change accordingly: 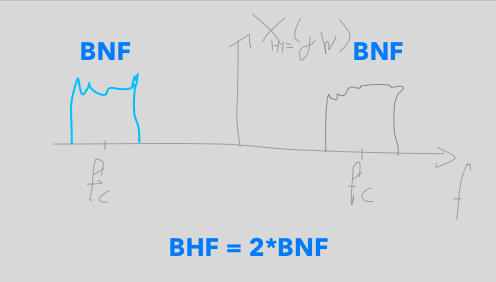 Now I know that the required bandwidth doubles. I don't understand where the doubled bandwidth applies as I can't transport negative frequencies.

What you've observed is just the difference between baseband modulation (your original plot) and carrier modulation (the second plot). Note that for the AM case, since the signal that modulates the carrier is real, the resulting carrier-modulated signal is symmetric. This means that you can get away with only transmitting one of the sidebands. This approach is called single sideband (SSB) modulation. With an SSB system, the carrier-modulated signal only has the bandwidth of approximately one of the sidebands of the original baseband signal.

It's a misunderstanding that you "can't transport negative frequencies". You always do, as long as you send real-valued signals. Real-valued signals always have a (conjugate) symmetric spectrum.

It's true that this type of amplitude modulation (double-sideband AM) with twice the bandwidth of the baseband signal is inefficient. There are two options to avoid this inefficient use of bandwidth. First, use single sideband modulation (as mentioned in Jason R's answer), or, second, use a complex baseband signal, i.e., use two signals and orthogonal carriers. This is called quadrature modulation, and it uses the same bandwidth as conventional (double-sideband) amplitude modulation, but it transmits two signals instead of one.

Not the answer you're looking for? Browse other questions tagged frequency-spectrum modulation bandwidth or ask your own question.

0
Modulation of voice
2
Value of power spectral density $N_0$ or effect of scaling bandwidth to SNR
2
What is the definition of the bandwidth of a signal?
1
Why would amplitude modulation result in change of frequency?
2
How Does the RMS of White Noise Change with Sampling Frequency?
0
Passband vs Baseband Bandwidth
2
QPSK Data Rate vs Bandwidth at Passband: Why can it only transmit 1 bit per Hz and not 2 bits per Hz?