Applying a window function to a speech signal

For speech signals usually hanning or hamming window with 50 percent overlap is used.

What is the most suitable windowing function to apply to a speech signal prior to the STFT?

hanning or hamming window with 50 percent overlap is used generally.

Is it necessary to apply more than one windowing function?

Not necessary i would say.

are you asking about Mel scale, in second question? because your application is speaker recognition.

I don't really understand what "apply a suitable windowing function" "prior to the STFT" means. Most STFT implementation incorporate apodizing windows. And the best is always related of some cost function, objective or processing.

Note that there are people called Mr Hanning, but they are not (AFAIK) at the origin of the raised-cosine or von Hann window (Julius von Hann, Austrian meteorologist). You can find a mention at page 97 from the book The measurement of power spectra from the point of view of communications engineering (archive.org), 1958, by Blackman and Tuckey. Noteworthy, they spell hamming and hanning in small letters.

Hamming or Hann windows are very standard. $50\%$ or $75\%$ overlap are common. In the recent works I know of, especially for blind source separation, people often use at least two window sizes: a shorter one for transients, and a longer one.

This is a first step toward using different windows depending on the scale of observation. Some have used a multiscale context, such as in the
ERBlet non-stationary Gabor filterbank, ERB for Equivalent Rectanguar Bandwidth, with a constant-Q transform: 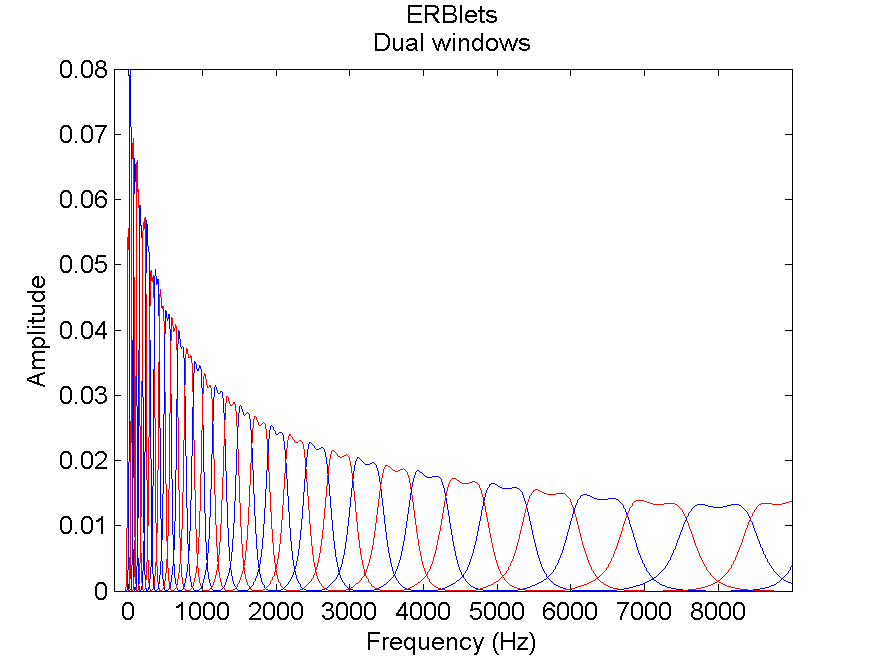 The choice of the best windows, to me, even for speech, is not clearly settled.

Not the answer you're looking for? Browse other questions tagged window-functions speech-recognition speech-processing or ask your own question.

17
human speech noise filter
1
Applying Window Function to Low Frequency Signals
1
STFT - Window Functions
3
Using MFCC to an ANN Speech Recognition System
0
Data representations for speech data
10
How does noise reduction for speech recognition differ from noise reduction that is supposed to make speech more “intelligible” for humans?
0
Difference between applying a window to a whole signal and frames.
2
Why is the Hamming and Hanning window the most widely used for speech spectograms?