This is a cross-post (on recommendation) from CV.

My problem is very simple.

I currently intend on using Kriging (Gaussian process regression) to perform regression between the trajectories marked with red dots on the below plot, where a simple linear-regression surface has been superimposed as well.

As you can see there is a strong correlation in a particular direction of the four time-series. 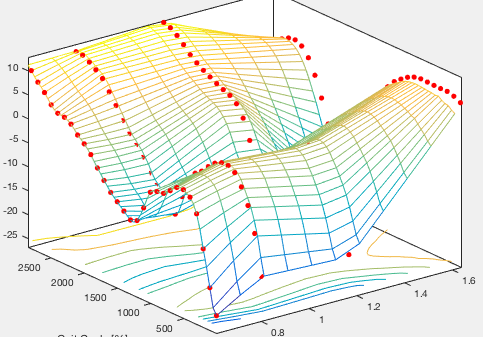 Through long and very interestind discussion with @DeltaIV, we started consdering other methods such as harmonic regression. The latter would have been very elegant except the example time-series in the above plot have different periods (fundamental frequencies) thus HR will not work.

Hence I would like to ask you excellent people what you would recommend for either regression or interpolation between quasi-periodic time-series such as the above? I should not that the above plot shows only one period, that approximately repeats itself but not quite (hence 'quasi').

Alas currently (in order of preference):

Browse other questions tagged fourier-transform frequency interpolation or ask your own question.