What are the relative merits of various upsampling schemes?

I recently encountered a DSP system which did some internal upsampling via zero padding. Expecting zero-order-hold, I was surprised to find that a DC signal did not produce a DC output; many harmonics of the internal (lower) sampling frequency were also present in the output.

It is important to understand that any low-pass filter can be used to get rid of the aliases and thus complete the interpolation. Some filters have advantages when used in interpolation, though. I'll discuss the various flavors of interpolation filtering below.

Interpolating FIR filters are efficient because they combine upsampling and alias filtering into one step. This is most easily seen in an example. Suppose we have a data sequence $x[n]$ and we want to interpolate it by a factor of two. The first step is to upsample by a factor of two. This changes the original data sequence from $x_0, x_1, ... x_N$ to $x_0, 0, x_1, 0, ... x_N$.

Now suppose we have a low-pass FIR filter, $h[n]$, that we will use to remove the alias. When we convolve the upsampled data sequence with the filter, half the filter taps are stimulated by the non-zero samples, and half the taps are inactive because they correspond to the zero samples. The half that is stimulated and the half that is inactive flips back and forth as the filter goes through the data. These two sets of taps are sometimes referred to as the filter phases.

This same effect can be achieved implicitly by eliminating the upsampling, and filtering the original data sequence with an interpolating FIR filter. The interpolating FIR filter produces $m$ outputs for every input sample. For all $m$ outputs the filter will operate on the same $ceil(K/m)$ input samples (where K is the number of filter taps and "ceil" is the ceiling function).

An example will hopefully illustrate how this works. Suppose that we have a six tap filter and we are interpolating by a factor of two. The filter taps are [1 -2 4 4 -2 1]. If we literally interpolated and then filtered the samples and filter taps would line up (once there was full overlap) as follows:

The problem with it is that its low-pass filtering is quite poor. We can see that when we recognize that the zero-hold interpolator is a special case of FIR interpolation. It corresponds to upsampling followed by an $m$-wide rectangle filter. The Fourier transform of a rectangle filter is a sinc function, which is a rather shabby low-pass filter. It's shabbiness can be fixed with a compensating FIR filter, but if you are going to do that you might as well just use a good low-pass filter to begin with.

The triangle filter is two rectangle filters convolved together, which corresponds to sinc squared in the frequency domain. This is a definite step up from the zero-order hold, but is still not great.

I have never used an interpolating IIR filter so I won't say a lot about them. I assume that the same arguments apply as in regular filtering- IIR filters are more efficient, can be unstable, don't have linear phase, etc. I do not believe that they can combine the upsampling and filtering steps like a FIR filter can, but I could be wrong about that.

I'll throw this one in even though it's not very common (of course, I don't think the zero-hold is common either). This thread discusses FFT resampling, where resampling is both interpolation and decimation.

Second-order hold interpolators are usually referred to as "quadratic interpolators". They are non-linear and thus cannot be implemented as FIR filters, which are linear. I do not understand the math behind them well, so I won't discuss their performance. I will say, though, that I believe that they are somewhat common outside of signal processing.

Higher order (three or more) methods also exist. These are referred to as "polynomial regressions".

I forgot to mention CIC Filters. CIC filters are used for two reasons: they use only adders/subtracters (not as big a deal now that multiplies are fast and cheap), and they can do really large sample rate changes pretty efficiently. Their down side is that they are essentially an efficient implementation of a cascaded rectangle filter, so they have all of the disadvantages of rectangle filters as discussed above. CIC interpolators are pretty much always preceded by a compensating FIR filter that pre-distorts the signal to cancel out the distortion introduced by the CIC. If the sample rate change is large enough the cost of the pre-distortion filter is worth it.

The main difference between methods is how the low pass filtering is implemented. The ideal upsampler would be include an ideal low-pass filter but that's impractical. Considering the problem in the frequency domain allows to find the right up-sampling algorithm for your specific requirements:

When considering the difference between sample-and-hold (i.e. repetition of sample values) and zero padding, it's helpful to realize (as Jim and Hilmar point out) that sample-and-hold can be interpreted as upsampling by zero padding followed by an FIR filter whose impulse response consists of a rectangular pulse.

For example, when upsampling from 2 kHz to 64 kHz (a factor of 32), we can implement this by inserting 31 zeros between each pair of 2 kHz sampling, and then filtering by an FIR filter which consists of 32 ones, with all other coefficients zero.

Considering the sample-and-hold in this way makes it easy to analyze. We can get the frequency response of the sample-and-hold operation by taking the Fourier transform of the rectangular window. As Jim points out, the Fourier transform of a rectangular pulse is a sinc function with linear phase (since the rectangle is not centered around $\tau=0$).

It turns out that this sinc function has its nulls at exactly the harmonics of the lower sampling frequency. In our example application of upsampling from 2048 Hz to 65536 Hz, the frequency response of the sample-and-hold operation has nulls at 2048 Hz, 4096 Hz, etc . 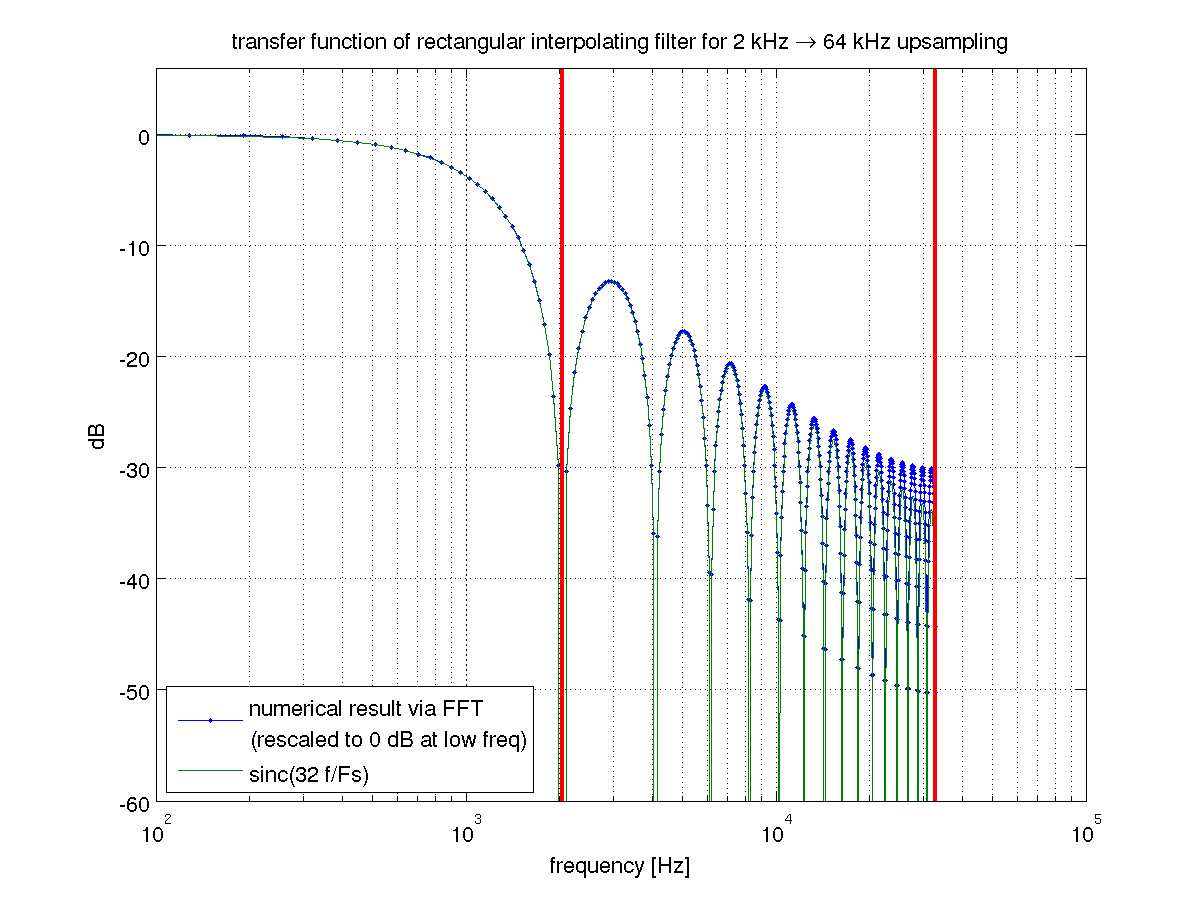 From this, I conclude that any interpolating filter that totally suppresses the harmonics of the original sampling frequency will look something like "sample and hold". Is this right?

With respect to the criteria of suppressing these harmonics, the sample-and-hold appears to be optimal. However, its anti-aliasing abilities are poor, since, aside from the harmonic nulls, its frequency response only falls off like $1/f$ above the old Nyquist rate.

2
Does audio upsampling create noise/artifacts or degrade the signal?
3
What is the difference between cubic interpolation and cubic “Spline” interpolation?. How to use it for upsampling purpose?
0
What is the difference between Linear Interpolation factor and Sampling rate conversion factor?
0
What are the implications of resampling the derivative of a signal with a higher frequency than the original signal?
1
Upsampling - What purpose does the interpolation filter have?
0
What are the 'phases' in this 2D scaler filter
0
What is the meaning of spectral contamination in image processing?