I'm a bit confused about the interpretation of the Nyquist plot when the origin is part of the plot. In this case I'm not even considering closed loops, I'm just looking at the Nyquist Plot of a given transfer function and trying to relate it to the corresponding poles and zeros. 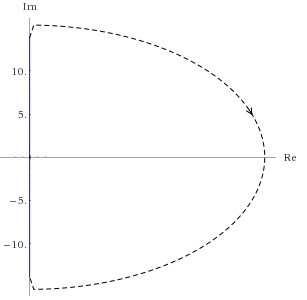 This system is marginally stable, and the origin is neither inside nor outside the loop, it is in the curve. 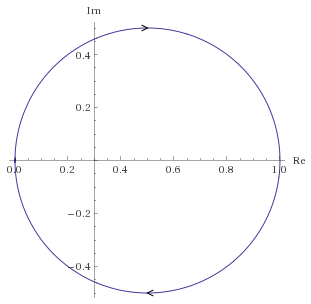 Again, the origin is not outside the curve, but now the system is stable. 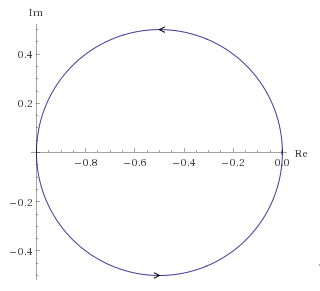 The origin is, again, part of the curve.

Shouldn't the Nyquist Plot of a given transfer function tell the difference between poles and zeros just by looking at how many times (and which direction) the origin is surrounded by plot loops?

First to clear up the OP's misunderstanding: the Nyquist Stability Criteria involves clockwise encirclements of -1, not the origin, and this would be the polar plot for the open-loop gain specifically.

I've included some details below for those that are more interested.

First a review of the basic equation relating Open Loop gain and Closed Loop Gain for a control loop: 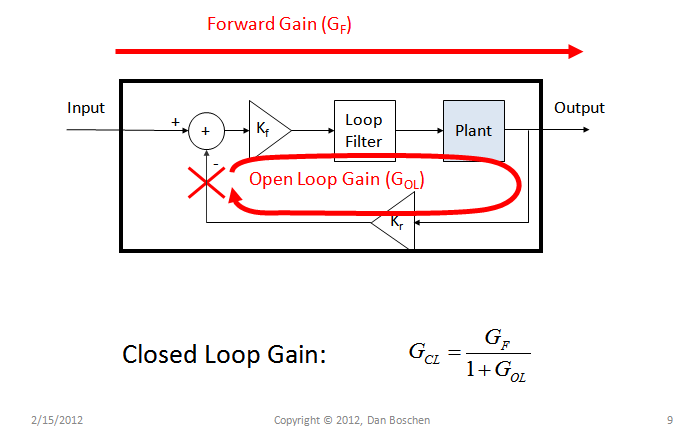 Therefore all stability assessments are methods to determine if any of the roots of the characteristic equation are in the right half plane (and therefore unstable).

What Nyquist did in creating the "Nyquist Stability Criteria" was make use of Cauchy's Argument Principle as a method to determine this. The significance of his approach was that instead of using the characteristic equation, he was able to do this with just the Open Loop Gain alone ($G_{OL}$). And what you will observe when you see the approach is that you do not actually need an equation for the open loop gain; we can go in the lab (or simulate a complex digital design) and measure the transfer function as a magnitude and phase versus frequency, and from that measurement directly determine stability without having to solve for poles and zeros and polynomials etc. This is very significant so I will stress that again with examples: We could have a system that has time delays that would not easily translate to a polynomial, or a digital system with decimation resulting in fractional powers of z, or a complex system where the effort to measure the magnitude and phase versus frequency would be a fraction of the effort to create an actual equation with accuracy. Often digital systems will have parasitic $z^{-1}$ delays that may easily be missed in the effort to create a transfer function, but cannot hide from the visible phase delay that can be measured. 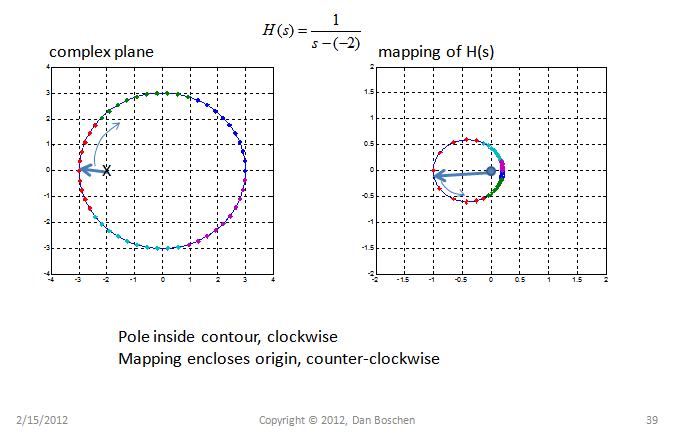 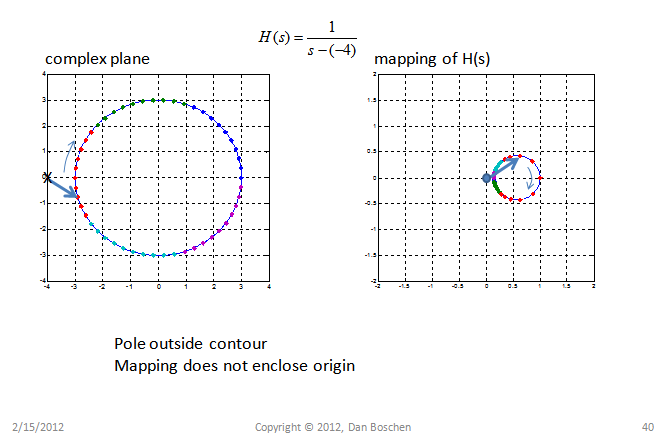 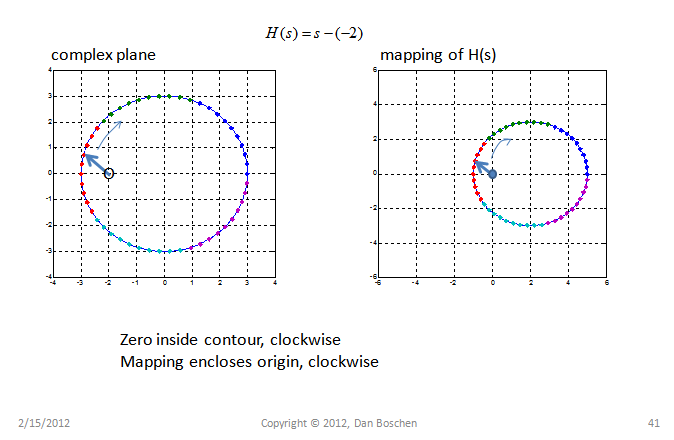 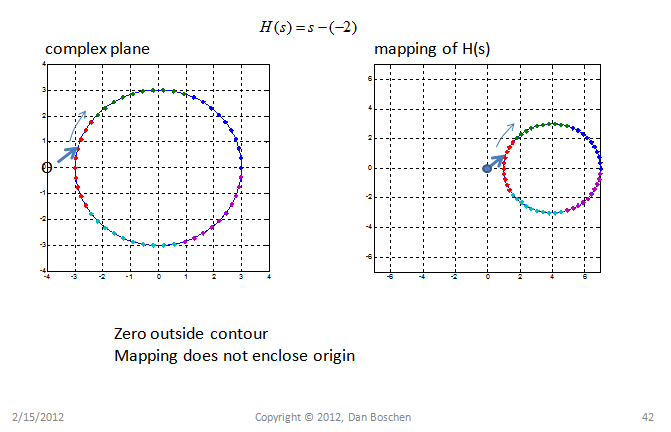 So using Cauchy's Argument Principle, Nyquist made the contour the entire right half plane to determine if any roots of the characteristic equation are inside the contour (and therefore an unstable system). Now if the Nyquist method did the contour for the characteristic equation itself, the encirclements would indeed be around the origin N= Z-P times as described above in the development of Cauchy's Argument Principle. Since the characteristic equation is $1+G_{OL}(s)$ and the roots are the solution to $1+G_{OL}(s)=0$, the Nyquist method instead does the contour around only $G_{OL}(s)$ and from $G_{OL}(s)= -1$ the encirclements if they exist due to roots in the right half plane will be around -1 (By subtracting 1 from both sides, we have simply shifted the origin but more importantly isolated the function for the open loop gain alone, as mentioned above it is a system parameter we can easily measure. 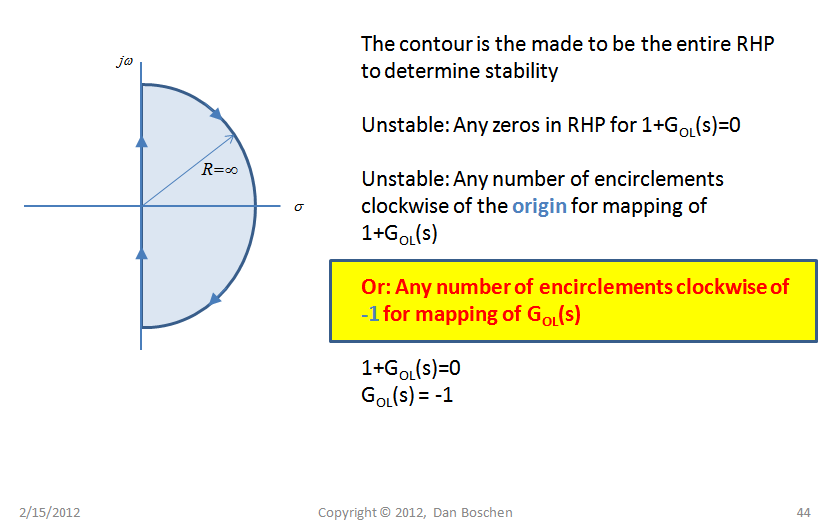 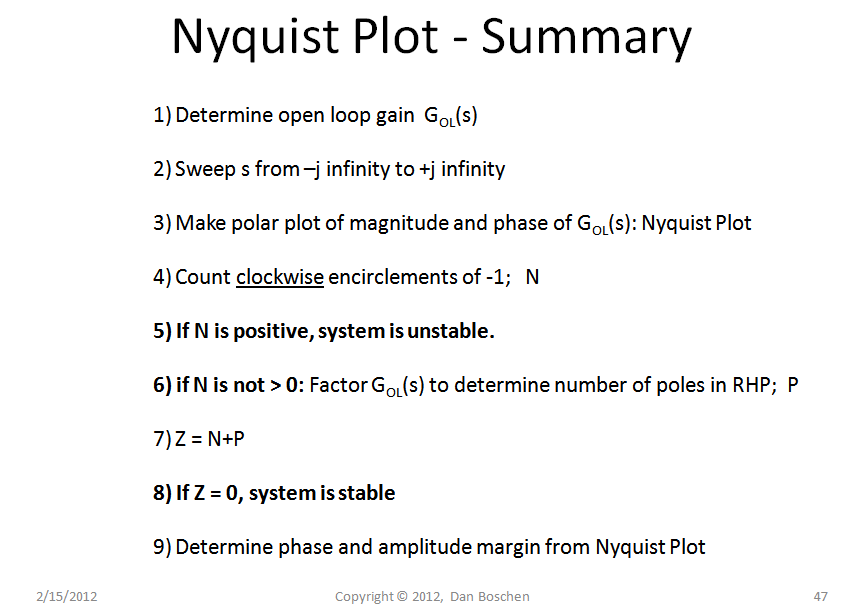 NOTE: I described the Nyquist plot in units of s implying an analog system, but everything described applies to digital systems as well in units of z (it is just the frequency magnitude and phase is done by sweeping the unit circle instead of the $j\omega$ axis.) It is interesting to observe the example below of an analog system that I mapped to digital using the method of impulse invariance, showing that the Nyquist plot for both systems is identical (at this scale). Point is the result of counting clockwise encirclements of -1 is still the same with the digital system: 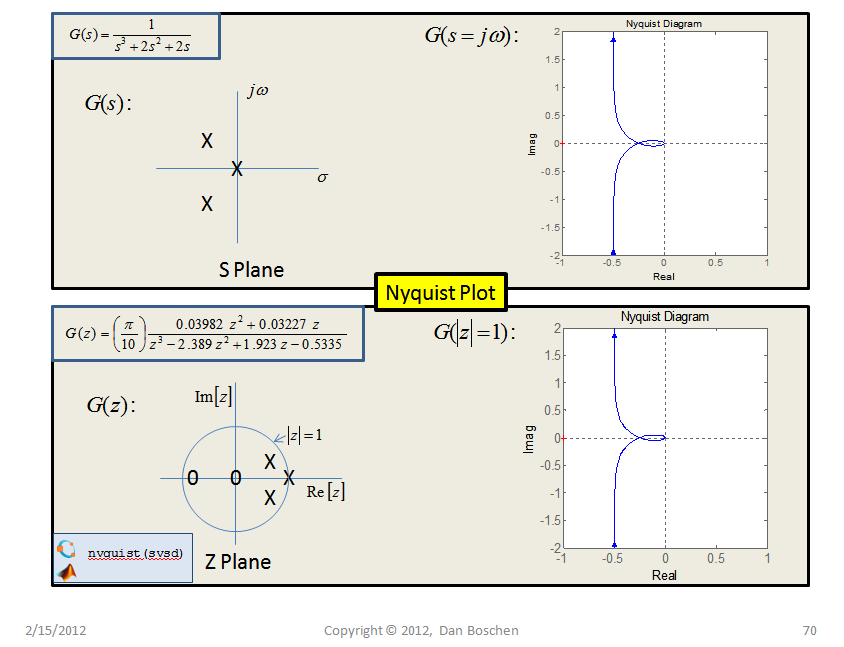 The problem here is that for the given functions, the usual Nyquist contour (see figure below) results in Nyquist plots from which no decision can be made about stability. 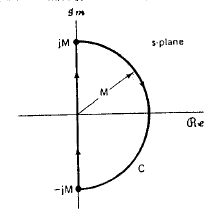 The reason is the fact that for all three functions the limit for $|s|\to\infty$ equals zero. So the function value along the semi-circle in the right half-plane (with infinite radius) is zero. This is not always a problem, but for the given functions (with no finite zeros) it results in Nyquist plots from which the encirclements of the origin cannot be determined.

This problem can be solved by modifying the Nyquist contour along which the complex variable $s$ moves. For the function $F(s)=\frac{1}{s}$, the contour shown above needs to be modified anyway because poles on the contour are not allowed. The usual modification is the introduction of a semi-circle in the right half-plane with infinitesimal radius centered at the origin (see this answer for a figure of such a modified contour.) In that way the pole at $s=0$ is avoided but the contour still encloses the complete right-half plane. Note that this modification is not necessary for the other two functions, which do not have poles on the contour.

The other modification that will make visible the encirclements of the origin is to leave the radius $M$ in above figure finite. Of course, this implies that our contour does not enclose the complete right half-plane. However, the radius $M$ can be made as large as necessary. Moreover, for the given functions we know the pole locations anyway and we only want to show that the Nyquist plot along the modified contour does give the expected result.

For the function $F(s)=\frac{1}{s}$ (left-most figure) we see that the Nyquist plot does not encircle the origin, which agrees with the fact that there are no poles and no (finite) zeros in the right half-plane. [Note that the pole at $s=0$ is outside the Nyquist contour due to the infinitesimal semi-circle in the Nyquist contour mentioned above.]

There is also no encirclement of the origin for the function $F(s)=\frac{1}{s+1}$ (center figure). This is in agreement with the fact that there are no poles and no (finite) zeros in the right half-plane.

Finally, for $F(s)=\frac{1}{s-1}$ (right-most plot) we have one counter-clockwise encirclement of the origin, corresponding to one pole and no (finite) zeros in the right-half plane.

The Nyquist plot is nothing but a plot of the function $$ \mathbb R \to \mathbb C,\qquad \omega\mapsto G(j\omega) $$ with $G$ your transfer function. Essentially the curve you see is the locus of points $G(j\omega)$ as $\omega$ varies in $\mathbb R$. Thus if you take $G(j\omega)= 1/(j\omega+1)$, the origin technically does not belong to the curve! In fact $+\infty$ and $-\infty$ do not belong to $\mathbb R$, and you have $G(j\omega)=0$ only for such values. all the points $G(j\omega)$ that you obtain for arbitrary big (or small) $\omega\in\mathbb R$ do belong to the plot, so the curve asyntotically tends to the origin, but it never reaches it. So yes, the origin is not on the curve.

Furthermore, if you consider the real part of $G(j\omega)$, that is the quantity $$ Re[G(j\omega)] = Re\left[\dfrac{j\omega-1}{j\omega-1}G(j\omega)\right]=Re\left[\dfrac{j\omega-1}{-1-\omega^2}\right] = \dfrac{1}{1+\omega^2} $$ you have that for all $\omega\in\mathbb R$ the real part is positive! and it is zero only for $\omega=\pm\infty$, that however are not admissible. Therefore the origin lies at the left of the curve. The same reasoning applies for both the two other examples you gave.

You have to be careful if the origin seems to lie on the curve. Namely you need to investigate what the curve does during the D-part, $s=\infty\,i\,\,e^{-i\,\theta}$, with $0\leq\theta\leq\pi$. Because it might or might not barely encircle the origin.

Not the answer you're looking for? Browse other questions tagged nyquist poles-zeros stability or ask your own question.

5
Identifying the magnitude and impulse response from pole zero plot quickly
2
What's the Q of a pole at the origin of the s-plane?
1
How to find system function, H(z) in the z-domain, given zero-pole plot of the system?
1
Under what conditions do the phase margin and Nyquist criteria give the same results?
0
Stable gain nyquist plot
1
Discrepancy in stability conditions when calculating via RH criterion and Nyquist criteria
3
Nyquist Plot for transfer functions with poles at the origin
1
Determine stability of feedback system from open loop transfer function and Nyquist stability criterion gives different results
2
How does the phase/gain margin method work?