How is the topo / scalp map from an EEG Signal with ICA created?

I am lately experimenting with an EEG and found this Library: MNE Python. I am using an ICA to find and correct artifacts - this is working fine.

It's now possible to plot a topo / scalp map for the ICA (EEGLab and other also can do this). 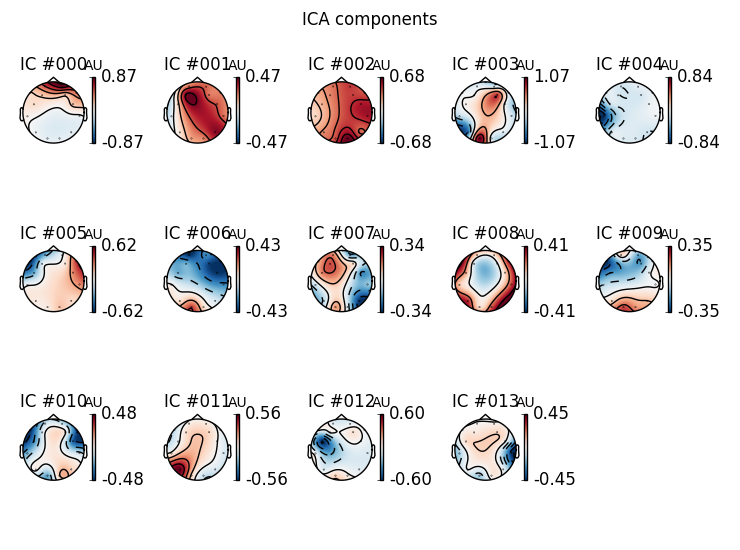 Now I wonder how this is calculated?

I assume it takes the topographic information of the EEG sensors and combines them with the ICs for each channel. Is this correct? Are there any sources explaining the process in general?

In general, the topographic map describes the distribution of electrical activity across the brain as measured in a number of well known "stations" (electrodes whose position is known) on the scalp.

This electrical activity is the combined result of millions of neurons firing below the skull. The strength of the electrical signal they create is measured across the REFerence electrode and one of the scalp electrodes. In a typical Electroencephalography (EEG) montage, you may have something like 16 to 20 channels (more in special cases).

The Inverse Problem in this case, that is, given the 20 (for example) signals of the EEG, calculate which neurons fired and how is ill-posed because it has a huge number of unknowns (millions of neurons) and only a handful of knowns (20 signals).

What can be done however, is to use Independent Component Analysis (ICA) to decompose the combined electrical activity of millions of neurons in the brain to a small number of independent (in a very specific mathematical sense) components.

In this case, the physical interpretation of this process is that the 20 channel activity is produced by 3,4,5,... independent "sources" within the skull. And, depending on the cognitive task that the subject was going through during data acquisition (whose performance is modulated by their mental state), these independent components might be able to provide some additional information. For example, maybe disease is reducing the number of sources or "changing their location" and so on.

OK, so, what we are really saying in this case is that we are recording the activity of a small number of components within the brain with 20 electrodes at the surface of the brain. We enter all these 20 time series in ICA, and ICA returns:

Essentially now we have the signals of the sources and we are re-constructing the signals at the electrodes.

Since we are now in full control, let's think about what happens with just one elementary waveform, let's call it "IC1". If we now plot the loadings on the positions of the electrodes (and interpolate in between) we get a topogaphic map of the strength of the Independent Component across the surface of the brain and to an extent, we can localise its activity. The same can be done for the rest of the components and this is how these topographic maps are calculated.

Not the answer you're looking for? Browse other questions tagged eeg ica visualization or ask your own question.

12
How does ICA handle inevitable delays in signals?
1
Using ICA on EEG signals for feature extraction
0
EEG signal processing
1
Separate static echos from acoustic signal (ICA?)
1
FASTICA algoritm produce independent components does not equal to the dimensionality of EEG signals
0
ICA - Exercise Problem from book - Matlab Code
0
Extracting EEG Bands from raw EEG signal to match with the Bands calculated on the sensor level
0
How does ICA works with more than two sources