Differences between phase and group delay

Yet another group delay vs. phase delay question! Though this is a question that's been asked several times I don't feel like it's been fully discussed so I'll post an example that I can't quite seem to wrap my head around.

Assume some system whose phase response is shown below; 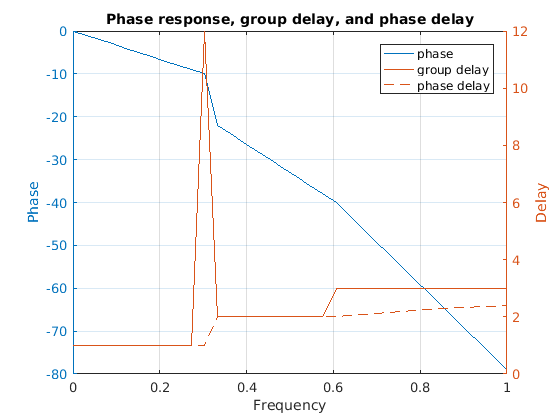 where the phase is piecewise affine.

For frequencies 0 < f < 0.3 the phase is purely linear and, as is expected, the phase and group delay are identical.

For frequencies 0.35 < f < 0.55 the phase is linear (excluding the discontinuous jump) and, again, in this range the phase and group delay are identical.

However, for f > 0.6 things get confusing for me. Here, the phase is affine (i.e. a straight line that doesn't necessarily pass through the origin). Here, the group delay is constant (as is obvious by its definition) but the phase delay varies with f. As the group delay is constant I would expect a band-limited signal, say in the range 0.7 < f < 0.9, to exhibit no dispersion, i.e. the output from the system is a (possibly frequency varying scaled) time-shifted version of the input. However, if we look at the phase delay it seems like the output should in fact show dispersion (as for some sinusoidal input sin(0.7*t) the delay is on the order of 2.1, while for some sinusoidal input sin(0.9*t) the delay is on the order of 2.5).

If anyone has a way of explaining this apparent paradox I'd really appreciate it!

Note that a constant group delay is not sufficient for a band-limited signal to exhibit no dispersion. It is the phase delay that needs to be constant. If the phase is affine, i.e., if we have

the group delay is constant

but the phase delay is not constant if $a\neq 0$:

Only for a (strictly) linear phase (i.e., for $a=0$ in Eq. $(1)$) does the phase delay equal the group delay. In that case, the delay experienced by a sinusoid at the input of an LTI system becomes independent of frequency.

Not the answer you're looking for? Browse other questions tagged phase linear-phase group-delay or ask your own question.

2
once again,confusion between phase and group delay