My question is around down conversion of a signal (e.g. RF) to DC and the affect of negative frequencies.

What does the signal at -1Khz to DC represent- I believe this is mirrored onto the DC-1kHz signal but does this create artifacts if the spectral content is asymmetric?

If your mixer is a simple multiplication with a single oscillator, then yes, that will be the case.

As Dilip explained, real (RF) signals are always symmetrical in spectrum to the 0Hz axis. That means your original doesn't only exist around 3kHz, it also exists around -3kHz, only mirrored!

I think your image captures that pretty fine: 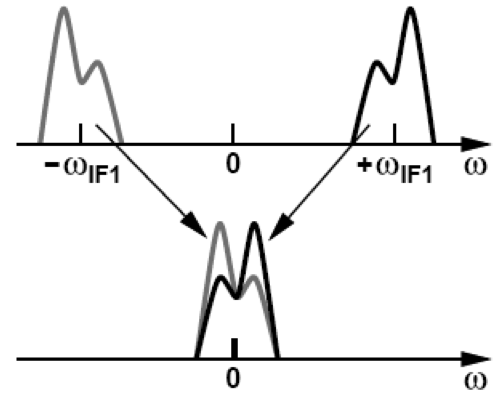 Problem is that for real-valued signals, there's no physical difference between positive and negative frequencies – and thus, your mirrored signal also gets overlayed with this. So you have the small and the big spectral peak overlay - and since they were originally two different parts of your signal, this overlay is not actually just a "shifted copy" of your original signal, but a "corrupted" version.

The only way this wouldn't happen is if the "upper" half of your signal (3-4 kHz) and the "lower" half (2-3 kHz) were already symmetrical in spectrum to its center frequency – because then, the your mirrored spectrum would be identical to the original, and nothing was lost.

But: simply read on. The fact that your text uses negative frequencies definitely works towards showing you how a complex baseband mixer works. In two or three pages, you'll understand what needs to be done to still be

Not the answer you're looking for? Browse other questions tagged demodulation or ask your own question.