I have a hydraulic breaker on a excavator that hammers with a dynamic bpm. I have recorded this sound so that it is in a mp3-file and would like to determine the momentary bpm for the length of the file.

I have tried using processing with beat detection from the minim-library but so far without any good results.

Is using beat detection with energy mode in a selected band the preferred way to go? I have had troubles getting good information about where, in terms of frequency, the beats are.

An example of the sound could come from http://www.youtube.com/watch?v=596Dtm95Txo

First I would just try to detect peaks and measure the time between them. If there's too much background noise to measure them reliably, I'd try to identify frequencies that are strong in the pulses only and filter out everything else. If that didn't work, I'd try to do a sliding window auto-correlation:

Actually, if the sounds you're looking for are similar enough, you can just use a regular cross-correlation, which will act like a sound-specific filter:

I tried it with your YouTube recording but the clangs are not uniform enough to match perfectly. They match well in the region of time from which I took the template, but not in earlier parts of the file: 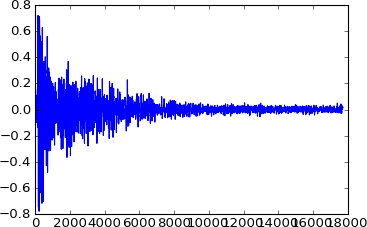 There are two differences between your problem and music beat detection:

Because of these, I fear that all the assumptions embedded into beat tracking algorithms made them useless on your problem. My suggestion would be to just use an onset detector with a high threshold (to make it more robust to noise). The events you want to detect seem to cover a rather wide frequency band anyway and have a fast decaying envelope.

Then, simply measure the time delta between adjacent events (when this delta is too high; consider that this is a pause); and eventually, average this over groups of a couple events.