Up front: I'm just a hobbyist, and I know zero about signal processing; I'm trying to write a simple(?) javascript algorithm and hoping I don't need a PhD in DSP to make progress on it.

I have an input signal that often shows only the tiniest difference between the max value and the min value. I'm trying to figure out a way to convert the values such that the max is proportionally much larger than the min, with a steep curve in between. I've tried everything I can think of with exponents and logarithms, even just subtracting the min from the rest of the curve, but nothing seems to work. Part of the problem, as can be seen in my awesome diagrams below, is that the signal strength varies quite a bit; I don't know how to account for that. Also, sometimes the signal is already pretty spikey, and I don't know how to account for that either.

I've poked around with google, but I don't really know what questions to ask. I'm not sure whether there is a class of algorithms that does this sort of thing. I tried "signal unsmoothing", with no luck, and I don't know what else it could be called.

Some hand-drawn diagrams, placeholders while I try to learn how to draw curves on stackexchange. The two on the left show the kinds of signals I often get: varying strength, but the max is barely bigger than the min. The one on the right is what I'm trying to get: a big spike in the middle with a steep curve down to the min.

Is there a name for a class of algorithms that does this sort of thing? Is there a better way to formulate my questions so I can google more effectively? Is there a ridiculously trivial way to do this? 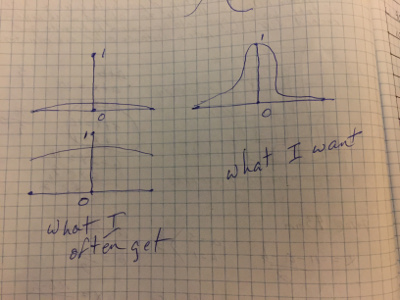 In case it helps, my ultimate goal: I'm modeling the movement of mosquitos. I'm working on getting them to move toward the smell of their prey while accounting for negative factors such as toxins in the air, or high temperature, as well as their jittery motions to avoid being squashed. It's going pretty well, except I have this chronic problem of the input signals being too flat for meaningful comparisons.

What you are trying to do is Contrast Enhancement. Contrast is the ratio of maximum to the minimum.

Lets consider as example that your signal's intensity is ranging from 30 to 40 but you need a range of 0 to 255 with good contrast.

Added:Instead of above step3 you could also do,

n should be greater than 1.As n increases the spikiness also increases. In your case choosing around 2 or 3 should be enough I guess.

Not the answer you're looking for? Browse other questions tagged signal-analysis algorithms or ask your own question.

2
Matlab video processing of Contracting tissues. how to analyze movement?
9
Examples of linear/logistic regression applications
2
Audio Recognition and Learning
0
Circular Convolution of h(n)*x(n)
0
Understanding equal power crossfades
2
Triaxial accelerometer to single signal
4
Understanding FFT: FFT size and bins
0
how do I derive the system equation for a simple delay with feedback?
5
Idea for Noise Level Estimation / Automatic Thresholding in the Presence of Peaks