So I've read this article for a project im working on:

They use cardinality in pattern recognition and claim that it is "highly descriptive".

There's a lot of red flags in that paper that shouldn't have passed review. In fact, I'm a bit surprised – Mr. Ortiz-Catalan is a well-published researcher in a research group called "signals and systems" at a very prestigious university, and yet there's sentences like:

Altering the dimension of the unit used for sampling (ADC resolution) to a high precision unit (for example, a double) would alienate the discrimination power of cardinality.

There's no ADC that give double precision floating point values. (Aside from "double precision" being a relative term, only defined within one programming language or CPU architecture). At any rate, the "D" in ADC stands for "digital", and that means "discrete in time and value, so

This is because every sample value would be unique, so cardinality will always be equal to the number of samples in the time window (maximum value of cardinality).

is class-A hogwash, because sampling leads to discrete samples, and thus, the maximum number of unique values you can get is the cardinality of the alphabet of your ADC.

The same applies to:

A simple operation like dividing the EMG sampled values by the gain of the amplifiers, in an attempt to use the original EMG amplitude in further computations, could increase the unit precision automatically by the processing software; that is, from the original acquisition values (for example, 14 bits) to a double, in the case of MATLAB (Massachusetts, United States).

For a fixed gain, you get as many unique values out of that division as you put in – division by a constant is a function (school math), for the same input value it should give the same output value; the data type doesn't matter here (it might, in a corner case, mean that the number of output values is smaller than the number of input values. Never more. And generally: Information can't be generated during signal processing – they cite Information Theory as basis for their research, so they must know the Data Processing Theorem, and gaining values would be equivalent to generating information).

I have to credit the author for the "I cite a software tool as coming from Massachusetts" joke – I liked that, it was cute :)

Having cleared up that ADCs only give discrete values, let's move forward.

Every ADC I encountered in EMG applications so far is used with a proper anti-aliasing filter up front. Needing to do that is mathematical/physical fact – if you don't band-limit the analog signal before sampling it, you get artifacts, namely aliasing in your signal, and also, especially for "peaky" signals such as EMG tends to be, instead of noticing every peak, you'd, in the best case, just get a non-1 probability of observation.

So here we go, feeding in band-limited signals into an ADC with a finite set of values.

Now, I mainly work in communication technology, so I'm much more familiar with the mathematical tools meant for analysis of harmonic signals, but we can still work with this pretty well:

Nyquist's sampling theorem says that, if the original signal is sufficiently band-limited, we can reconstruct the original signal from a periodical observation of instantaneous values. That periodicality is the sampling rate, and in the real-valued case, that needs to be just a bit higher than twice the highest frequency in the signal (i.e. the signal's bandwidth).

Nyquist doesn't require any synchronization between the signal and the sampling.

I personally have my problem with papers that offer $p$-values but don't even mention how they calculated those. Maybe you could nicely ask to get their algorithms/software. This should be no problem – the paper boldly boasts "open access" insignia, and that ideologically implies that they're proud to share not only their results but also their methodology. I do believe that the paper is on to something – it seems to have demonstrated a classifier that outperforms others. However, these others might have been badly parameterized, and might not perform that much worse, especially on properly preprocessed data.

This is partly an answer to the question and partly a reply to Marcus (good answer, by the way!)

I know this is a rather late response, but after seeing this and a related reddit thread, I thought I sould clear up a couple points that are ambiguous in the article. I am currently studying under Dr. Ortiz, and it looks like there are some assumptions made in the article that were not explicitly stated. This is not intended as a defense of the article (and I hope it does not come across as such), but merely an explanation of ambiguities.

The ADC we're using for most of our research (TI ADS1299) does indeed give out integer values for the conversion, and the numbers are converted to voltages on-board the microcontroller (TI Tiva C-Series) to single-precision floating point numbers.

Citing the location of origin of the software tools used is pretty common at this school, and I believe it has to do with clearing up any ambiguity with possibly overlapping company names/trademarks due to discrepencies in the appropriate regulatory standards in each country (especially when you leave the U.S. and E.U.).

The lion's share of the EMG signal energy is between 125-250Hz, but relevant signal information can be found spread over roughly 10-1000Hz. Because of this, most of our research is centered around sampling at 2kHz to get the entire range (and ideally the best results), but a lot of the real-time stuff and stuff that happens on the microcontroller is typically set to 500Hz or 1kHz sampling frequency to decrease processing time.

The cardinality in the signal is related not just to the signal frequency, but also to the signal energy. Each EMG channel will receive different signals from different muscles, and it's the point of the pattern recognition algorithms to detect the synergies between the signal channels. This point is important, because it allows us some information into both the frequency and energy content of the signal without having to perform any transforms. Below is an example of EMG signal mean absolute value and signal cardinality for visual reference. While this particular feature might not be practical to implement on a microcontroller (used for prosthetic devices), it can be useful in applications where processing is done on a full-fledged PC anyways. 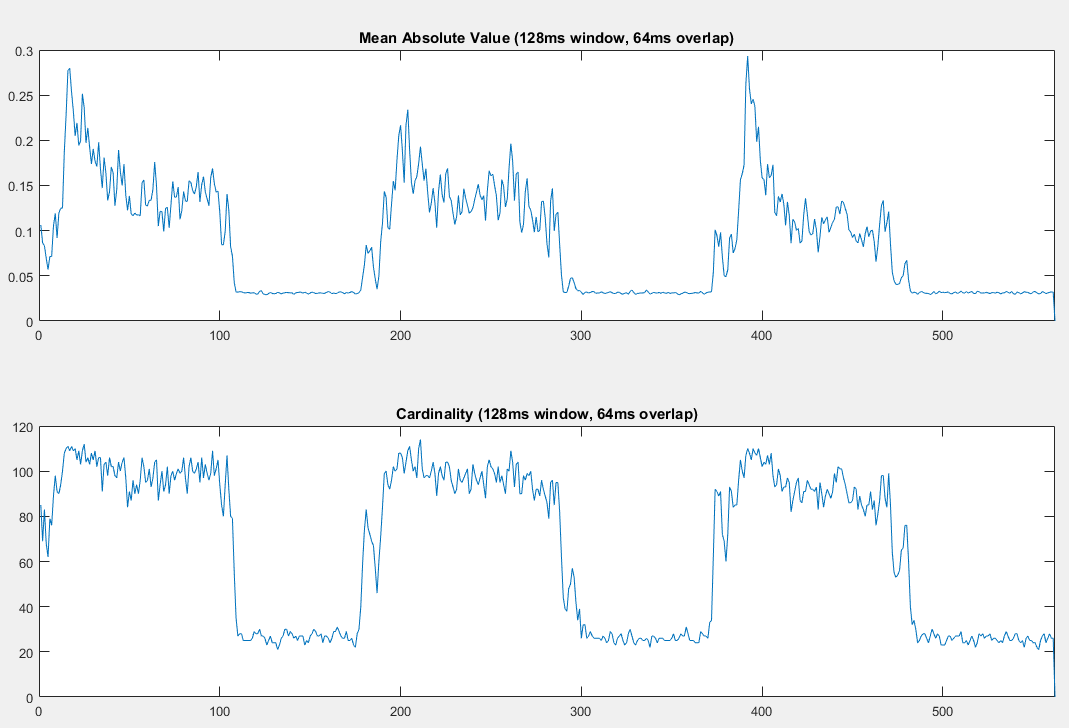 As for the statistical significance listed, I'm not sure how it was calculated (Dr. Ortiz is out of the office this week), but I'll bring the point up with him when he comes back.

For the curious, the hardware (that we made) and the software in question are all open-source hosted on github: https://github.com/biopatrec/biopatrec

There are a bunch of sample recordings in the repo as well, so you can play around with signals and parameters to your heart's content to get a feel for each of the features and classifiers that are supported. We are also always looking for contributors.

We will take these points into consideration for future articles. Thanks for your interest!

Not the answer you're looking for? Browse other questions tagged signal-analysis signal-detection pattern or ask your own question.