When might looking at rising edges perform better than cross-correlation?

A simple question as the title indicates:

Let us assume that we have two signals, measured from two different sensors that are close together. (For this application, the sensors are measuring blood/biological activity at different positions on an animal body).

I am wondering when, (if at all), measuring the rising edges of both signals might offer a better estimate of their relative time delays, VS doing a simple cross-correlation?

When might we expect this to be true, if ever?

I ask because I would like to know if looking at rising edges may indeed be optimal in some sense, instead of it being something 'ad-hocy' and possibly mis-leading in lieu of cross-correlation.

Using the rising edge is better than cross-correlation when there is the physical equivalent of an inductor in the system, which will introduce inertia into the system. That inertia will cause the output to rise gradually, then fall back down. Even in that case the cross-correlation might be more useful, but if you wanted to know when the input starts to affect the output the rise would be more accurate. 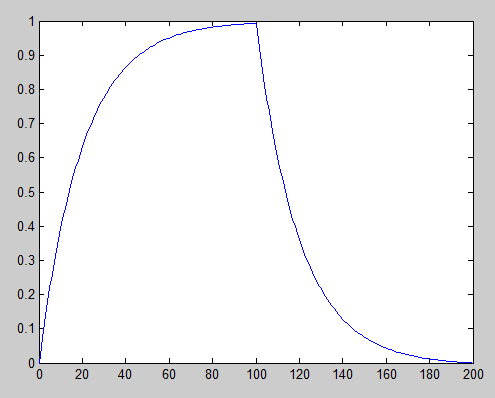 The figure above is illustrative of what I'm talking about. The inductor (or "inertia introducing object") resists any change in the current flow, so initially it resists the flow causing an exponential rise (as opposed to a sharp rise that matches the presumed non-ideal impulse at the input), and then opposes the current stopping when the input ends, causing the exponential fall at the output.

If the input looks more-or-less like an impulse function, it will correlate most strongly with the output at the output's peak, at time 100. It's clear, though, that the input starts to affect the output at time 1. In different situations, either measurement could be the more useful one.

Not the answer you're looking for? Browse other questions tagged autocorrelation cross-correlation or ask your own question.