Is subtraction a common method for efficient filtering?

I've recently been doing some DSP programming with regard to filter banks. One topic that I've come across was that of the dyadic filter bank. This filter bank essentially breaks a signal into sub-band signals corresponding to some octave.

Looking at some diagrams, I notice that many of them illustrate implementing both a highpass filter and low pass filter. This will essentially generate two sub-band signals. Conceptually, this makes sense.

You are right about the importance of the phase. 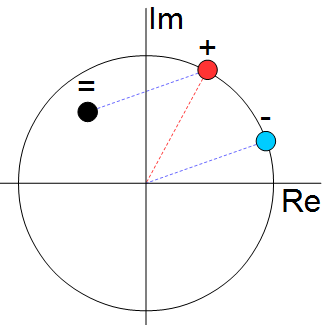 Figure 1. Subtraction of complex numbers of equal magnitude does not always result in a zero. The calculation is black = red - blue.

If the black dot represents the combined frequency response for a system output = input - filtered input at a frequency that you intend to be part of a stop band, you must ensure that the filter is zero-phase. Or if the filter is linear-phase and has in its impulse response a center of symmetry at some time, you must delay the copy of the input by the same amount of time before subtraction. This will not work with efficient infinite impulse response (IIR) filters because of their non-linear phase.

That is in fact a very common technique, and as Olli pointed out it can only work if you make sure that the HPF (LPF) version is subtracted from the original signal only after incorporating the filter's group delay into the original signal's path to form a LPF (HPF).

If you think about this, assume that the LPF in this scheme is exactly a half-band filter, and thus, the resulting HPF is a HB, too, only that it let's through the "other half" of the spectrum.

Nyquist says that you're now necessarily oversampling the output by 2 - the signal is now contained in only one half of the available spectrum. Hence, you "can" now drop half of the samples, without incurring aliasing (let's act as if transition widths don't exist, for the moment). Dropping half of the samples is typically denoted by ↓2.

Hm, that looks like we're doing the dropping too late. No use adding samples if we're going to ignore them later on. Hence, above is identical to:

which is identical to:

Now, your LPF is a FIR filter.

Without wanting to explain all of Polyphase filters, you can, without any problem, take a filter with N taps, and decompose it into to tap vectors, one containing the 0., 2., 4., (even) … and the other one containing the 1., 3., … (odd) taps, and just feed every other even sample into the first, and every odd sample into the second sub-filter and add up the result. If you think about this, you can now "pull in" the ↓2 over the point where you add these filters' outputs, and it becomes clear that you then save a lot of computation.

What does this have to do with your question? If you spin this thought further, you can decompose any (sufficiently long) filter into a number $L$ of sub-filters. If you then "rotate" each subfilter by an $e^{l\frac{j2\pi}{L} n }$ with $l$ denoting the $l$th subfilter, and $n$ being a sample counter, you end you end up with something that takes one very sharp filter, and replicates it $L$ times, each time shifted by $\frac1L$ of the overall bandwidth, and gives you $L$ streams of samples, each containing one bank's output of this so-called Polyphase Analysis Filterbank, without you paying the computational cost of $L$ very sharp bandpass filters.

So, if you need to take one filter, and generate identical, yet frequency-shifted bandpass filters in a bank of filters whose sum should be the original signal: use these. They are awesome!

Not the answer you're looking for? Browse other questions tagged filters filter-bank or ask your own question.