I was doing some research on filters, So I designed butterworth filter based on pole locations. I applied to a simple sine signal to check for the outputs. I cannot find the reason for what I noticed. 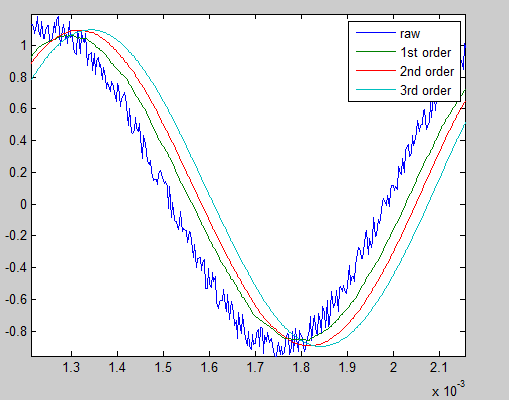 Why does higher order filter have alot of phase shifts. Is it trying to adjust for more noise reduction? If, Yes how is it mathematically possible? I have only changed the order of the filter, I have kept cut off frequency same

Both types of filters are structured around a fundamental unit. A fundamental operation that is responsible for the filtering. That is, the delay unit. Of course, besides the delay unit you also have the sumation points. But sumation, on its own, without delay doesn't produce filtering.

So, both filters, produce outputs that depend on the past of the inputs (and / or outputs).

The concept of "filter order" is defined for both types of filters but in a slightly different way (it's still the same thing really).

Let's look at an FIR filter:

Here, to produce one value for $y_n$ we sum $m$ products of the past of the signal and some impulse response $h$. $Nh$ is the total length of $h$.

The order of the filter here is $N_h$, directly proportional to the number of delay units in the filter.

So, by increasing the order, we do get a sharper filter but also a longer filter and the longer the filter is, the longer it takes for one of the $x_n$ to propagate through the series of delays.

Which, if you take a closer look, is like two FIR filters back-to-back. The left part, we have seen before and it is the FIR filter from the first equation. The right part is an FIR but this time it is on past values of the output. We therefore have introduced feedback...and all the "joys" that come with it.

OK, so now let us look at your experiment. You design a filter and you pass through it a simple sinusoid at some fixed frequency. Then you increase the order and you observe a longer delay.

Which is perfectly reasonable, because, irrespectively of the type of filter (FIR / IIR), increasing the order, means adding more delay units.

Not the answer you're looking for? Browse other questions tagged filters discrete-signals butterworth or ask your own question.