If you shine a bright enough white light on a red object, will the object turn white or stay red? Please assume the object is not capable of specular reflection.

Perception and reality are two different things. A red object is a red object. Even in darkness, the conditions that make it red are still there.

An overexposed red object takes into account the dynamic range of the sensor that was used to image it.

Exposure determines how much energy falls on the imaging sensor per unit of time.

Imaging sensors produce a signal that is proportional to exposure.

But, imaging sensors are finite elements. They cannot keep producing an infinite value for an infinite amount of exposure.

Therefore, if you image a red object within the capabilities of the sensor, you will still see it as red.

If you image the object beyond the capabilities of the sensor, it might will appear white, because the exposure to light energy is so big that it has saturated all three channels (R,G,B) of the imaging sensor.

An object that appears white in a photograph, is not necessarily white in reality.

When an object is Red, we mean that it only reflects the portion of the electromagnetic spectrum representing this color, about 650nm.

For a red object, we generally consider that only the color red is reflected, like the XKCD-like diagram below.

This is a wavelength-intensity graph for various colored objects (anodised aluminum to be exact). The intensity is maximum for the wavelength associated with the color we see, but it still can reflect other colors, although at a much lower intensity as well. 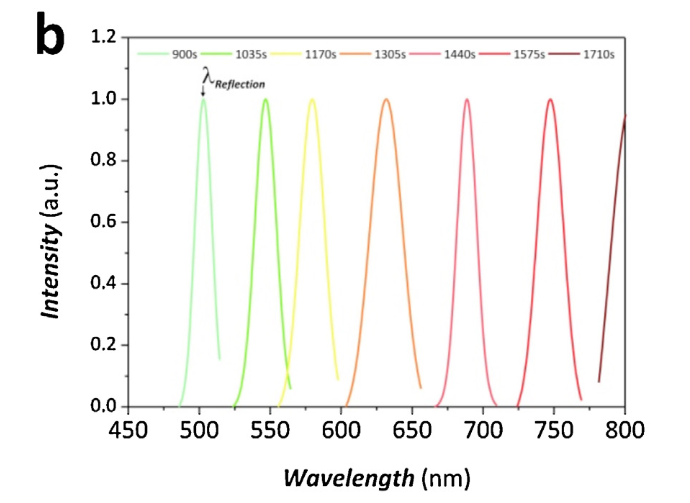 Well I just tried looking head-on at a 250 W infrared reflector bulb through a red filter and the brightest light looked yellowish white, turning green as my eye adapted. I guess the sensitivity of the different type color receptors overlap enough spectrally such that they can simultaneously saturate from just red-wavelength light, or the filter was not too selective. It would be unethical to try with a brighter source...

11
How to remove certain background from image?
21
How to Remove a Glare / Clipped Brightness from an Image?
11
Understanding Cb and Cr Components of YCbCr Color Space
2
Image Gradient: Light to Dark, Dark to Light
0
Segment highly packed nuclei with dotted high intensity signal inside each object