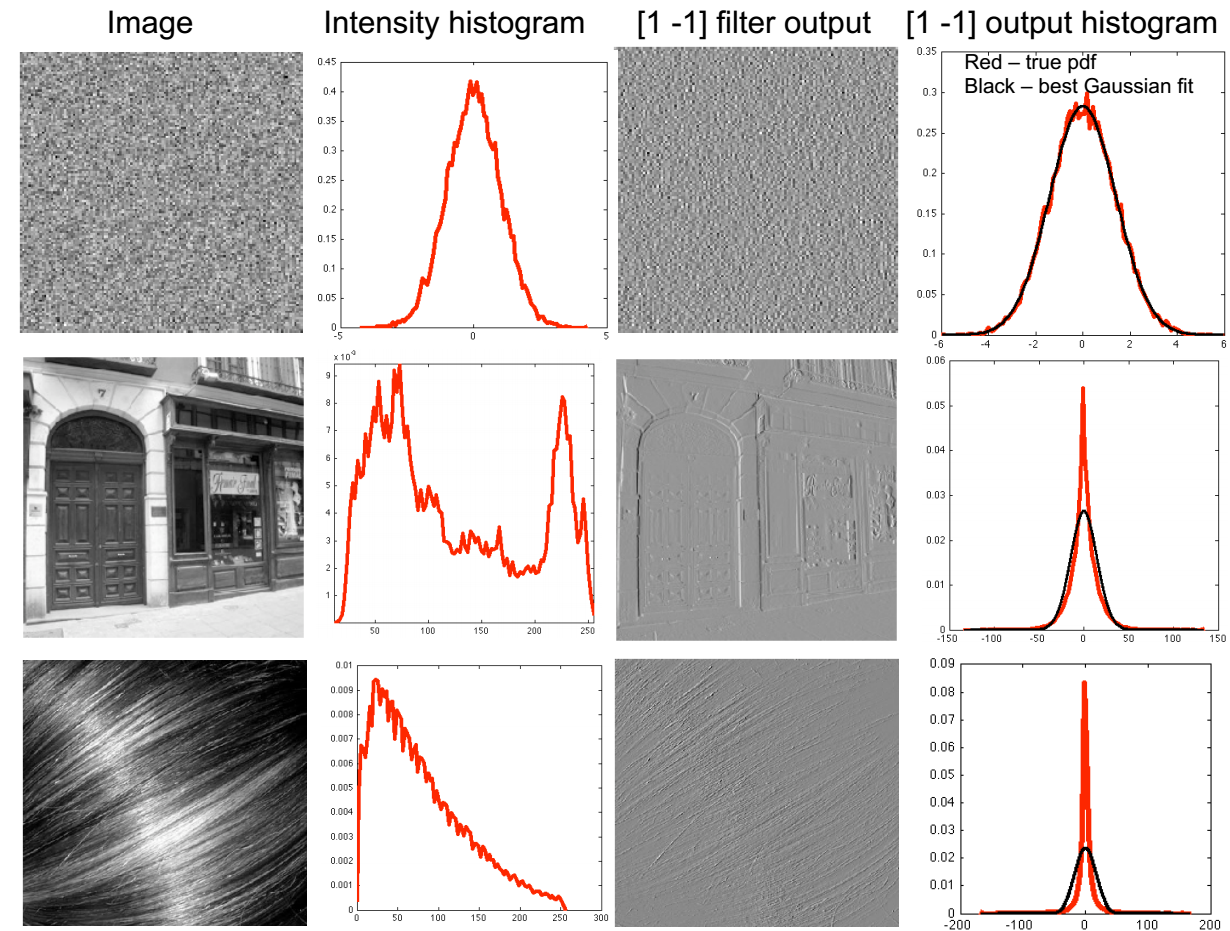 In the paper Image Denoising Using Scale Mixtures of Gaussians in the Wavelet Domain by Javier Portilla, Vasily Strela, Martin J. Wainwright, and Eero P. Simoncelli there is one paragraph

Contemporary models of image statistics are rooted in the television engineering of the 1950s (see [4] for review), which relied on a characterization of the autocovariance function for purposes of optimal signal representation and transmission. This work, and nearly all work since, assumes that image statistics are spatially homogeneous (i.e., strict-sense stationary). Another common assumption in image modeling is that the statistics are invariant, when suitably normalized, to changes in spatial scale. The translation- and scale-invariance assumptions, coupled with an assumption of Gaussianity, provides the baseline model found throughout the engineering literature: images are samples of a Gaussian random field, with variance falling as in the frequency domain. In the context of denoising, if one assumes the noise is additive and independent of the signal, and is also a Gaussian sample, then the optimal estimator is linear.

Does it assume that each pixel in images obey the same probability distribution for the histograms of images?

Images of different scenes will definitely not obey the same probability distribution of the pixel values.

Histograms are one way that people use to do dimensionality reduction: move from a 2D image to a 1D signal.

Does the histogram of any image gradient obey the same probability distribution?

What you are seeing in the image gradient is the "diffs" in the image. Because images are generally low-pass in nature, this means you are picking out the places where they change. There will be (at least) two components to this change: how the scene being imaged changes and how the sensor capturing the image perturbs the "true" pixel values.

For the same camera taking the images, this second component should be very similar across all images.

means that the image statistics are very similar regardless of where in the image you look. One way the statistic show up would be in the histogram, yes.

Gaussian means that the noise (random fluctuations in the image) follows a normal or Gaussian distribution.

If the images are not random, then they will follow some well-defined deterministic rule.

Certainly, histograms can be used.

Histograms of images can differ, widely. However, when features are inspected, one often uses derivative filters at different scales, or morphological decompositions, or independent component analysis.

A traditional and heuristic model for the resulting coefficients of a component is that of the Generalized Gaussian-Laplacian Distribution, or GGD:

They account quite well for the histogram you observe on the right. You can read for instance: Aapo Hyvarinen, Jarmo Hurri, Patrik O. Hoyer: Natural Image Statistics, A probabilistic approach to early computational vision

Not the answer you're looking for? Browse other questions tagged image-processing gaussian statistics random-process or ask your own question.

14
Detecting meandering rivers in images
5
How is Weighted Thresholded Histogram Equalization different from Gamma Correction Image enhancement
3
Optimal image histogram for Human eye
1
How to compute the statistics of the DFT of correlated noise?
2
Use Scale Space Representation to Filter Single Image
2
Histogram estimation (from sub-set of image pixels)
0
Uncorrelated and zero mean image noise
3
Image Histogram - What Is the Interpretation of PDF