I have a simple question, that might not be up to the level in this forum:

In MATLAB, we have $s[n]$, sampled at some sampling period, $T_s$. To simulate $r[n]$, the only problem faced is that $\tau_k$ will not be a multiple of $T_s$. My question is "Is it a good idea to upsample the signal $s[n]$ up to a desired sampling period, say $NT_s$". If so, why should filtering be done after the upsampling process ?

The upsampling solution adds additional difficulties, as mentioned in some posts here. Please consider this solution..

The Discrete Fourier Transform (DFT) properties might support you. Take a look at the time shifting property. It states that $$\mathcal{F}\{x[k-\tau]\} = e^{-j\omega\tau}\mathcal{F}\{x\}$$ I implemented a possible use of the property in your problem in the following octave script. A picture with the result is also attached. A cos signal with 3[Hz] is sampled at 10[Hz], and shifted 33[ms] with the property. I hope it helps. 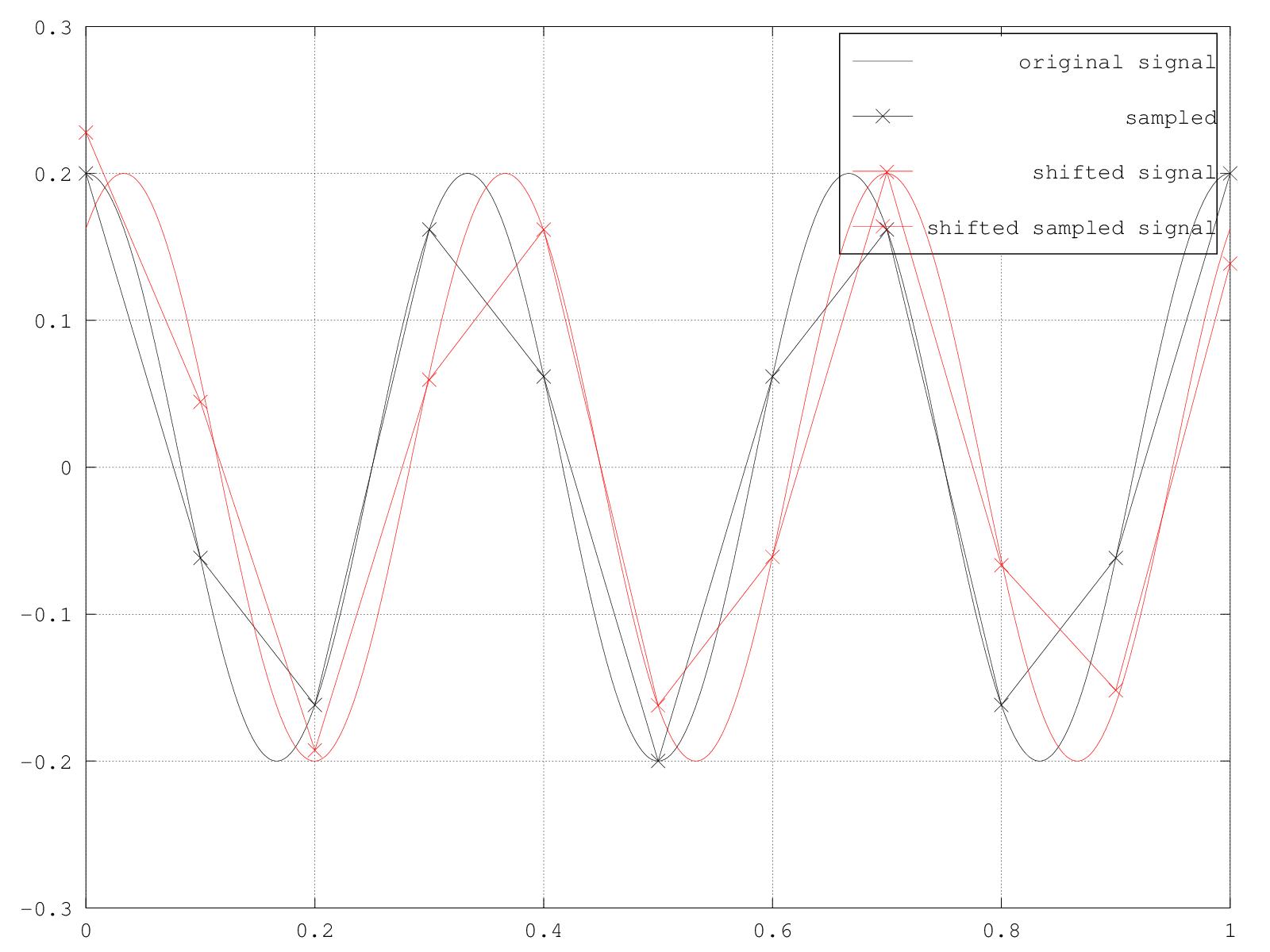 Is it a good idea to upsample (and then filter?). No. To be able to resolve the multipath components, your sampling rate (A/D sampling) must be greater than ( i think 2x ) the minimum multi-path delay. Upsampling (and then filtering) will not provide you the information you need.

The problem of simulating a multi-path channel where the delays are not integer multiples of the sampling time is not trivial. The simplest method is just to round each tap to the nearest sample, however this is not what happens in reality:

$$ s(t) = \sum_ns[n]g(t-nT) $$ where T is the sampling period and $g(t)$ is the combination of DAC and subsequent low-pass filter. Note that $g(t)$ can be assumed to be RRC or Sinc-filter for example. Then, the multi-path channels comes in:

Here, $h[n]$ is the discrete-time equivalent channel. Note that this channel is actually neither causal nor finite, since g(t) is bandlimited (and hence infinite in time).

You can understand $h[n]$ as a sampled version of the sum of continuous-time shifts of the overall impulse response without the channel u(t). Normally, u(t) should be a Nyquist-Filter, i.e. it is ISI-free. In this case, and when the channel taps are at integer fractions, you get a well-behaved (i.e. finite and causal) discrete channel.

This is how it works in reality. For simulation, you can generate this h[n] and truncate it, when the tap energy falls below a certain threshold.

2
Discretizing a continuous time signal
1
Damped sinusoidal form FFT of signal
0
Simulating multipath channel
4
Why do we have to rearrange a vector and shift the zero point to the first index, in preparation for an FFT?
0
How to account for phase and shift when composing a new signal based upon 2 or more recordings?