What is 'antenna-chain permutation' and its advantages?

I am working with Wi-Fi channel state information (CSI, a sort of channel matrix with OFDM subcarriers). I am using Intel 5300 Wi-Fi card and this tool provides a way to play around with extracted CSI information via MATLAB.

Interesting thing is, there is perm, a permutation vector in a figure below: 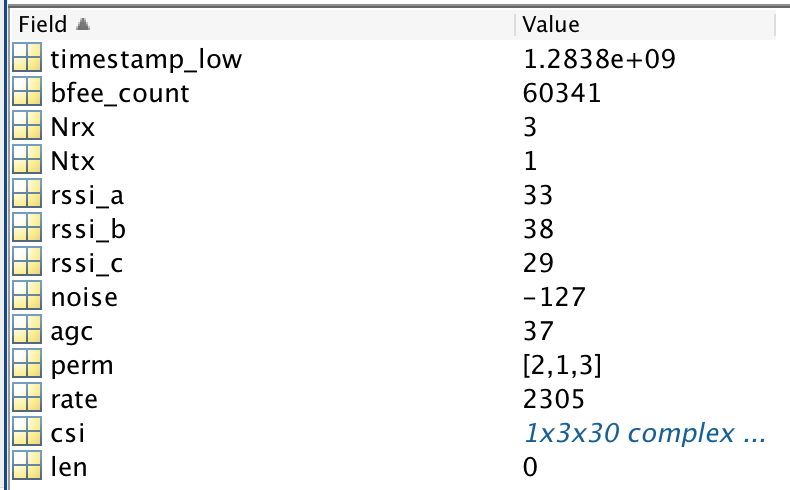 perm tells us how the NIC permuted the signals from the 3 receive antennas into the 3 RF chains that process the measurements. The sample value of [3 2 1] implies that Antenna C was sent to RF Chain A, Antenna B to Chain B, and Antenna A to Chain C. This operation is performed by an antenna selection module in the NIC and generally corresponds to ordering the antennas in decreasing order of RSSI.

What I am curious about is, why does this Intel 5300 Wi-Fi card do antenna-chain permutation and what are advantages of performing it?

I'll highlight terms that are worth googling in cursive below:

What you're looking at is a diversity receiver.

In this case, the idea is that by combining the signals of multiple antennas, the SNR can be maximized, minimizing the BER.

There's multiple methods of doing so – simply selecting the antenna with the highest RSSI (being probably the one with the best SNR) is called selection combining. When thinking about outage probabilities, this leads to a Bernoulli distribution, ie. the more antennas you have, the less like it is that your communication fails totally (but the gain of having more antennas quickly decreases after the second).

Another method is just adding up the signals – you can do that, and you'd get what's called equal gain combining. You'd get some sort of "oversampling" gain, supressing noise that is independent in each receiver branch, but a strong interferer might distort the result.

Then, you can add the receive signals up, but weigh them by some function that is proportional to their "quality". That way, you get maximum ratio combining, at least if the weights are basically proportional to SNR.

In a real-world receiver with a limited amount of ressources dedicated to assessing the signals, a simple ranking in three tiers of signal quality does sound like a feasible approach. For example, spending much power on synchronizing the strongest signal (i.e. estimating the phase of the channel impulse response) makes sense, since an error here has the gravest effect, whereas simpler approaches for the signals that are used to "push down" uncorrelated noise power (maybe aided by the strongest' chains info) might still make sense. Notice that modern WiFi receivers are pretty mighty beasts – not what you'd need to feel bad about if you don't understand them at once.

Another explanation might be much more in the analog than in the digital domain: For the strongest signal, you might want to use a different receive amplifier than for the weakest one – amplifiers are either a) low-noise, or b) high dynamic range or c) power-efficient (not to mention d) through z) cheap).