Can you explain to me in what way Hartley Transform differs from Fourier Transform? Is it even used today or is it some mostly forgotten, obsolete archaic thing?

Please don't use equations - I dont understand them, but I understand Fourier Transform.

As a service to those who prefer to see equations, the discrete Hartley transform $H_k$ and discrete Fourier transform $X_k$ of $x_k$, where $k = 0, \dots, N-1$ are defined by:

where $i$ is the imaginary unit. 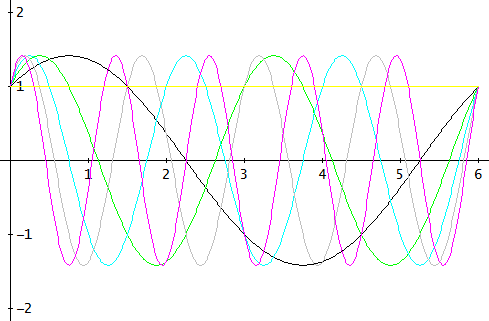 Being harmonic means that the frequency of each is an integer multiple of the lowest non-zero frequency. Some of the sinusoids have frequency greater than the Nyquist frequency. 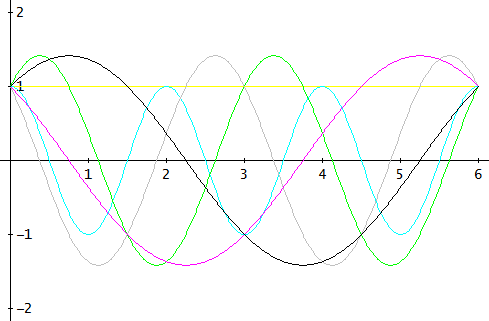 Except for the special cases of frequency 0 and π, the aliased Hartley basis functions come in pairs of harmonic equal frequency sinusoids that are 90 degree apart, just like in the real discrete Fourier transform below. Except for scaling and phase shifts (with one scaling constant and one phase shift constant for each pair), the basis functions are identical to those of the real discrete Fourier transform. 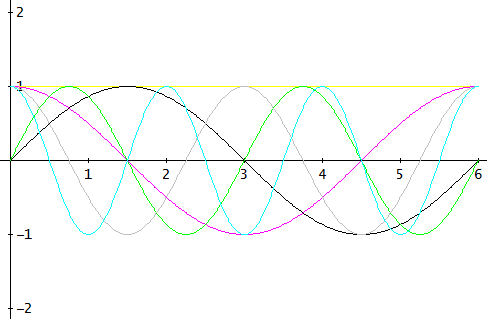 For frequencies 0 and π there are no sine basis functions because their samples would be zero-valued and would never contribute to the weighted sum in the inverse tramsform. Unlike with the Fig. 1 formulation of Hartley transform, the discrete Fourier transform basis functions stay within the Nyquist frequency limit.

The fast Hartley transform algorithm came out in 1984, but there has been no significant increase in its popularity since.

Figure 4. Google Ngram of Hartley transform counts the relative frequency of the word pair in literature as it developed over the years.

You are lucky if you do understand the Fourier transform; I still don't (caveat emptor).

Assuming a certain classical sign convention (i.e. a $e^{-ift}$ vs a $e^{ift}$ kernel, a change of convention won't change the properties), for a real signal, the discrete Hartley transform (DHT) is the sum of the real and the imaginary part of the discrete Fourier transform (DFT). In other words, it corresponds to the function: $a+ib \mapsto a+b$.

It is purely real, it is an involution, so it is its own inverse. It seems to still be in use for some coding, encryption or watermarking applications, where the use of real transforms can be simpler, while keeping some of the DFT nice properties (with respect to convolution for instance).

While in general it has been found to be no faster than FFT (see Fast Hartley Transform Implementation in MATLAB), it can be embedded into the same parametric family (New Parametric Discrete Fourier and Hartley Transforms, and Algorithms for Fast Computation, 2011). For some specific hardware, data or data size, it may still be found beneficial. Looking back, it has been used for the Fast computation of discrete cosine transform through fast Hartley transform by Henrique (Rico) Malvar. I suspect that the Hartley transform may have shed some insights into the development of the Lapped Orthogonal Transform (LOT).

Although quite forgotten, it may rise again some day.

You're right, it isn't very common. There are many Fourier-related transforms, most of which have a niche application.

It has the advantage that there are no imaginary numbers, and the forward and inverse transforms are the same. But the disadvantage is that for practical problems (such as modulation), you will have additional terms being summed that make it more cumbersome.

Here is a relatively non-mathy article describing the history of both transforms, written by the author of a fast Hartley transform algorithm. Perhaps this will help shed some light on this for you!

You are asking to understand this in the context of an implementation for signal processing, which requires an explanation based on programming. Ever the two worlds. Math has to work on paper and in reading minds, programmed implementations has to work in the world.

Because I read the 1988 Byte article, I searched just now and found [an article that mentioned it][1], and compared FHT to FFT (as did the Byte article). Fast Fourier Transform is used widely today, but the Fast Hartley Transform offered benefits in implementation (speed), and likely still does, on the proviso that chips aren't manufactured to accelerate 1 of the transforms.

In signal processing, speed vs. quality is vital. Both are implementations applied to the field. There are numerous transforms available, and you can implement your own. In doing so, something beyond your mind verifies what in your mind is applicable to the world.

Mathematicians have no use for the concept of speed of computation, and so they seem strangely unfit for implementing algorithms, despite that programming is simpler, more concrete, and heavily based on math including symbolization.

Programmers test formulas in mathematicians' minds. Don't hesitate to ask as you do, especially here. If you implemented a Fourier Transform, you understand it in a way a mathematician could not prove beyond on paper. (Cue [Principia][2]).

This factor would have to be removed today, to compare the two transforms rationally. [1]: https://m.eet.com/media/1175816/f-scott.pdf [2]: https://en.wikipedia.org/wiki/Principia_Mathematica

Not the answer you're looking for? Browse other questions tagged signal-analysis fourier-transform or ask your own question.