Assume we sample an unknown, bounded in magnitude, continuous time signal with constant sampling time $T=1/f_s$ at sample instances $kT$, ($k\in\mathbb{Z}$), without sampling jitter or quantization. We add the constraint that $B=\alpha f_N$, with $0\leq\alpha\leq 1$.

What I would like to figure out is the following: At sample instant $k$, I want to determine for each $\alpha$ a worst case fractional 'overshoot' of any continuous time signal between samples $k-1$ and $k$, that I could have had. I.e. how much the continuous time signal was higher than the highest (absolute) sampled values at sample instants $k$ and $k-1$. The continuous signal, or reconstruction (since the sinc interpolation is perfect!!), that we have 'missed' by sampling.

Example: We set $\alpha=1$ and assume discrete time signal [1,0,1,0,1,1,0,1,0,1] (notice the double 1 near the middle, and does this signal even have $\alpha=1$?). Its sinc reconstruction (blue line) from the samples (black impulses) looks as follows (I have plotted the sincs belonging to each sample in gray): 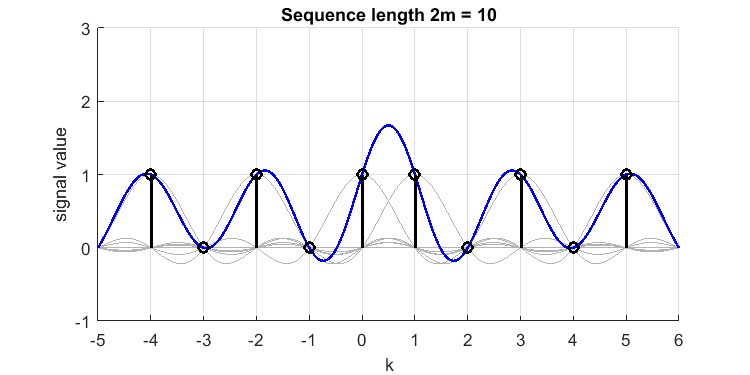 The 'overshoot' between samples $k=0$ and $k=1$, is $\approx 0.7$ or $70\%$. So we missed a peak of value 1.7 in our original band-limited continuous time, or the 'perfectly band limited reconstructed', signal. If I would have put 3 or more consecutive 1's the overshoot would have been less (the Gibbs phenomenon is in the end much smaller). Therefore, 2 consecutive continuous samples like this is 'worst case'.

Extending the signal in both directions will make the overshoot grow: 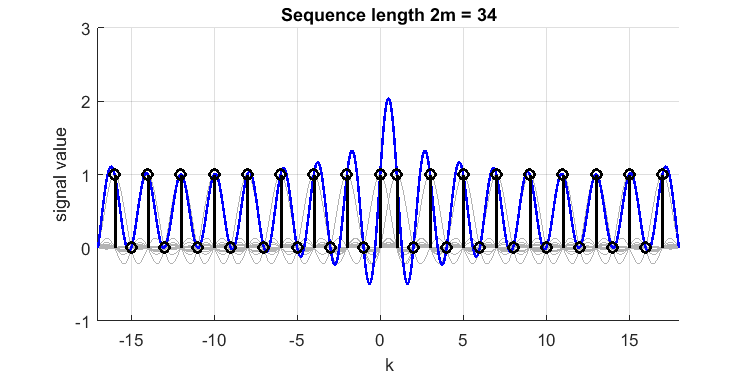 For any sequence length $2m$, this 'overshoot' $o(m)$ will grow indefinitely, $o(m)\propto\ln{(m)}$, which goes to $\infty$ when $m\to\infty$. This is because each sample the sincs will create constructive 'interference', and the sum of $1/\pi n$ (the contributions of all the envelopes of unit sinc's) for $n\to\infty$ does not converge.

This (I think) simlar to the following: if constantly sampling a value 0, I could also reconstruct a continuous time signal with infinite amplitude that is only sampled in the nodes at values of 0, e.g. $\sin{\pi f_s t}$. This tells me the same thing: that if I allow a signal to be at the Nyquist frequency the worst overshoot I could 'miss' is infinite.

If we now assume we do this same sinc interpolation, but know for sure $\alpha<1$, like $\alpha=0.5$. Then, (my gut feeling says) this effect should go down and should even remain finite (when $m\to \infty$)!. Since for any signal brick-wall limited to bandwidth $\alpha f_s/2$, we get a filter impulse response of $h(t)\propto \text{sinc}{\left(\frac{t-kT}{\alpha T}\right)}$ (right?). Therefore, signal transitions cannot be as fast as for the changing impulse train example above, and therefore contributions of each sinc function during reconstruction cannot create infinite constructive interference.

My problem: I don't know how to proceed from here; how to form a 'proof' of the worst case overshoot I could ever have find between 2 consecutive samples, knowing that $\alpha<1$, for $any$ signal (not necessarily these unit impulse-train like examples). A given value for $\alpha$ gives me a slope $\frac{dh(t)}{dt}$ of the band-limiting convolution kernel $h(t)$, which should tell me something about how much consecutive samples need to be different, but I do not see the steps to take from there to reach any generic conclusion.

I found about this inequality in Amos Lapidoth excellent (and free in PDF format) book "A Foundation in Digital Communication". A proof can be found in M. A. Pinsky, "Introduction to Fourier Analysis and Wavelets".

I have used +1 and -1 in the sequence instead of your 1 and 0. With $\alpha=1$, the band-limited continuous function $f_m(T)$ in your first two figures (with the above mentioned modification) is: 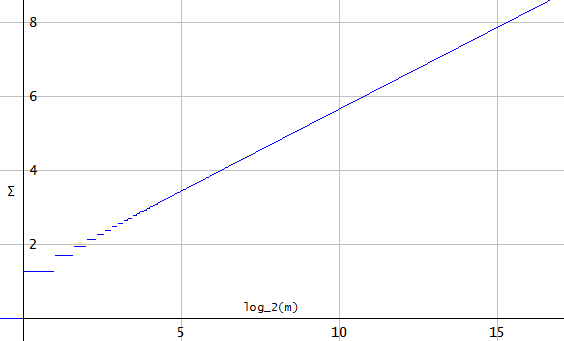 Figure 1. $f_m(1/2)$ plotted as function of $\log_2(m)$ The logarithmic horizontal axis linearizes the growth as $m\rightarrow\infty$.

which explains the linearization seen in Fig. 1. We can now construct a normalized version $g_m(T)$ of the function $f_m(T)$ that inherits its bandlimitedness but does not blow up as $m\rightarrow\infty$:

As $m\rightarrow\infty$, $g_m(T)$ seems to approach a Nyquist frequency sinusoid sampled at its zeros:

It would be nice to find a definite proof that a portion of the uniformly distributed zeros can be used to reconstruct the function given its relatively low bandwidth compared to the mean density of those zeros. I suppose if $\alpha < 1$, the sampling theorem suffices to make $g_\infty(T)$ vanish. In the literature, I've found some statements of interest:

The proof of part 2 of Theorem 4.1 showed that a band limited signal with $Ω = π$ with the property that the signal vanished at the points $x = n ∈ \mathbb{Z}$ must vanish identically.

It is well known that $g$ can have no more zeros, roughly speaking, than cos $\lambda t$ without vanishing identically.

Most of the results on the unique specification of one-dimensional signals are based upon the fact that a bandlimited function is entire (analytic everywhere) and is thus uniquely specified by its zeros (real and complex) to within a constant and an exponential factor. An arbitrary bandlimited function is uniquely specified by its (real) zero crossings if all its zeros are guaranteed to be real.
...
Additional work has involved identifying signals which are uniquely specified by their (real) zero crossings despite the fact that they also contain complex zeros. This is possible if the zero crossing rate is in some sense higher than the information rate or bandwidth of a signal.

Consider the band-limited function $\operatorname{sinc}(t)$ with Fourier transform $\operatorname{rect}(f)$ which can be recovered perfectly (since interpolation!) from its samples spaced $1$ second apart even though the samples include only the central peak and miss all the other local maxima and minima of the sinc function. Delay the sinc function by $\frac 12$ second so that the sampler misses the central peak entirely but instead gets adjacent samples with identical values $$\operatorname{sinc}\left(\frac 12\right) = \frac{\sin\pi/2}{\pi/2} = \frac 2\pi.$$ The overshoot of the maximum is thus $1 - \frac 2\pi$. I don't have a proof but I suspect that this will turn out to be the maximum overshoot for the case $\alpha = 1$. Smaller values of $\alpha$ will give samples closer to the peak value of $1$ and the overshoot will be correspondingly smaller.

Not the answer you're looking for? Browse other questions tagged sampling interpolation nyquist reconstruction or ask your own question.

6
Sampling of band-limited white noise
1
Sampling Theorem: How to know the value between two samples of a Signal
2
Philosophy of perfect inter-sample interpolation
4
Nonnegative or positive band-limited interpolation
2
Interpolation formula for two dimensional signal reconstruction in the frequency domain from polar samples
0
A voice signal is band-limited to 3.3 kHz. What is the Nyquist frequency?
9
reconstruction filter - How does it actually work?
0
Reconstruction of sampled band-pass signal
4
Reconstructing/interpolating small regions of a bandlimited signal by taking the fewest possible samples